Manchester City’s hunt for a new full-back, primarily a left-back is no longer a secret now. While Pep Guardiola publicly confirmed that Man City are in search of a defensive reinforcement but that won’t affect their plan for this season; Everyone on the City board understands the lack of fullback options can be a problem for Pep Guardiola’s side, especially as the season progresses. Having chased Brighton’s Marc Cucurella last month, the talks ended on a bitter note with either club not reaching an agreement and the player moving to Chelsea.

Currently having Kyle Walker and Joao Cancelo as senior fullbacks, Pep Guardiola will have to rely on 18-year-old Wilson Esbrand for depth if they fail to sign a wide back.

Recent reports suggest that City have shortlisted multiple targets including Sergio Gomez, Raphael Guerreiro, and Ait-Nouri. Out of all the options, Wolverhampton’s Rayan Ait-Nouri has emerged to be the most suitable candidate to go for.

Pep Guardiola managed club has focused on important signing in Haaland for just above £50 million and have signed Kalvin Phillips as an understudy to Rodri. While Kyle Walker and Joao Cancelo look set to begin the season as first-choice fullbacks, Pep Guardiola will feel the need to rotate his defenders to provide rest to the accomplished duo. Having sold Oleksandr Zinchenko to Arsenal, Manchester City don’t have a deputy fullback with Premier League experience as of now. Though Wilson Esbrand looks really promising in the long run, relying on him in the big games is too much to ask for the youngster.

Wolves are not in a position for the need to sell the defender hence, Nouri can cost Man City a good fee of around £40-45 million. Cityzens should look at this signing as a long-term solution on the left back as they have been utilizing multiple players out of position to fill the spot. A club of City’s stature can easily match Wolves’ fiscal demands and Nouri’s wages won’t be too much of a problem for City’s board either, signing Nouri looks like a financially calculated move also not to ignore the fact that City are in negative net spend for the current season.

With Kyle Walker slowly nearing the twilight of his career, Cancelo can move to his preferred right-back sooner than expected, City will need a natural left back to fill in the void. Ait-Nouri doesn’t have any Champions League experience but he is a highly rated prospect coming out from France. At just 21 years of age, Nouri has crossed 44 PL appearances and became a mainstay in Wolves’ lineup last season.

Already a PL regular, Ait-Nouri’s abilities can explode under the coaching of Pep Guardiola and in the company of various superstars at Manchester City. His style suits the City way as he can contribute in both halves of the pitch. 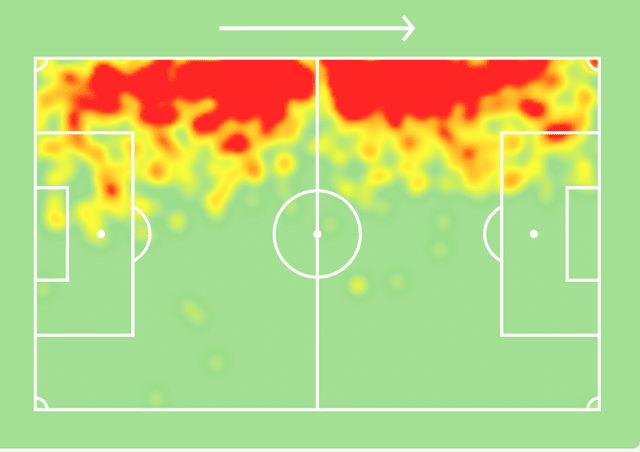 As we can see in the heatmap, Ait-Nouri has shown all round movements on the left side with almost the entire left flank turned red. This overlapping nature can help inverted wingers like Grealish and Alvarez get into the box more often and still have support on the flanks. This will help Guardiola to have more members in the box which ultimately results in more shots taking action from the forwards. His movements are most similar to that of Kolarov and Mendy when they were at Manchester City. While Ait-Nouri is much more reliable in the defense as compared to Mendy as the French u-21 regular has won 38 aerial duels, 98 tackles, and 10 blocks successfully. His physical prowess in height and speed gives him an edge in a critical situation.

Having a proper plan and a regular game time can bring the best out of Nouri, considering City’s current situation and depth in fullbacks the game time isn’t very hard to come by. Pep Guardiola is a smart rotator of his squad and can use Nouri in early UCL games, and cup games as well as a deputy option to Cancelo on left back.

Considering all the factors like PL experience, playing style, current requirements, age, and skills; Nouri looks like a reliable option for Manchester City for the present as well as a long-term solution at left-back.

Also Read  Who has qualified for the World Cup and who could miss out? England through but Portugal, Scotland, Senegal and Egypt at risk