On 1 November 1994, thousands of Newcastle United fans were in the Basque region to see NUFC play against Athletic Bilbao.

Ahead of their visit, I think fair to say that not a single one of them realised what lay ahead.

Getting back into Europe was obviously a massive boost and thousands had already enjoyed the trip (and 5-0 win!) in Antwerp but…this Athletic Bilbao experience was a different level.

Newcastle lost the game that night back in November 1994. However, I haven’t met a Newcastle United fan yet, who doesn’t look back on that away trip as anything but a massive positive.

The visit happened to coincide with a public holiday and with many streets shut to traffic, it was just one big all day / night party for both Newcastle United and Athletic Bilbao fans, interrupted by 90 minutes of football.

There weren’t quite so many Athletic Bilbao fans who travelled for this weekend’s friendly but hopefully they enjoyed themselves as much as so many of us did when enjoying their hospitality almost three decades ago!

Following their visit, Athletic Bilbao have released this excellent behind the scenes footage of the team and fans’ visit to Tyneside…

🔴⚪ Thank you Newcastle for letting a little bit of red and white into your city yesterday! We know it can’t have been easy! 😉
Beautiful city, amazing people and great football 👌
🎥 Behind-the-scenes footage from #NUFCAthletic
#AthleticClub 🦁 https://t.co/77n6bNfC9k 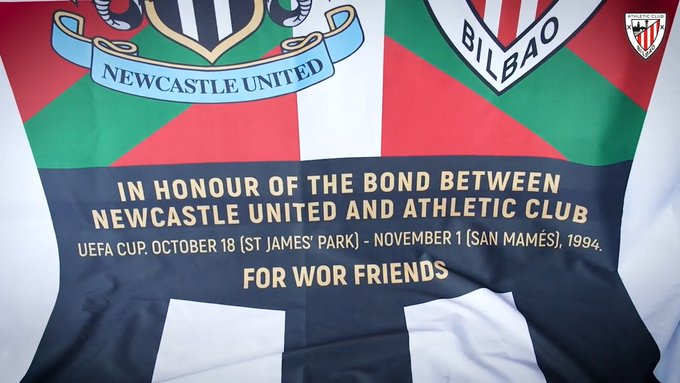 Football is just the best.

Newcastle United drop out of Champions League places
Tuchel and Conte play down clashes as Chelsea boss had someone else in his sights
3 Positives and 3 Negatives from Brighton 0 Newcastle 0 match
Man City warned selling Silva would hand Liverpool title race edge
Angry Ginola flexed at Gregory, then was welcomed to Everton by Gazza in a wig
Hasenhuttl has ‘lost trust of Saints players’ as Austin tips ex-boss to win sack race