Uneasy calm has enveloped the All Progressives Congress (APC) in Benue State over the alleged desperate ploy by a former Governor of the State, Mr George Akume to impose a Deputy Governorship candidate against the wish of majority members of the party.

Akume’s ploy is said to be threatening the success of the party in the 2023 governorship election unless the Senator Abdullah Adamu-led National Leadership rises to the challenge and averts implosion in the party.

Contrary to the position of APC leaders, elders and stakeholders in Benue South Senatorial District to be allowed free hand and due process in selecting a popular Deputy Governorship candidate to shore up acceptability of APC, Akume and two others are said to be bent on fielding their favorite person at the expense of the party.

In a strongly worded letter to the APC National Chairman, Senator Abdullah Adamu, the national leadership of the party was urged to quickly wade into the impasse and reverse any unpopular decision that may bring the party into collision with genuine members and voters in the State.

The Benue APC South Elders’ letter entitled “Impasse on the choice of the Deputy Governorship candidate in Benue State” and dated August 17, 2022 warned that the members will resist the ploy to impose Sam Ode on the people.

The letter to Adamu read in part “Once again, we wish to use this medium to draw Your Excellency’s kind attention to yet again, an undercurrent scheming by the leaders of the party in the State, Senator George Akume in connivance with two of his kinsmen, Chief Simon Shango and Senator Jack Tilley Gado to undermine the interest of the party in our Zone by imposing their nephew Hon Sam Ode as the running mate to the Governorship candidate, His Excellency, Rev Father Hyacinth Alia.

“Sir, reliable information at our disposal is to the effect that on Tuesday 16th August 2022, a plan was hatched by the aforementioned trio to convoke a meeting of some selected members of the State Working Committee of the party in Benue State at a designated venue in Abuja for the sole purpose of passing a vote of confidence on the purported choice of Hon Sam Ode as a running mate by just a handful of this leaders without any form of consultations with the leadership, elders and other stakeholders in Benue South Senatorial District.

“In arriving at the new plot, Senator George Akume, Chief Simon Shango and Senator Jack Tilley Gado, who conceived this latest plot as their last resort and mindful of the fact that members of the State Working Committee of the Tiv extraction from the two Senatorial District of Zone A and B will overrule that of the Benue South Senatorial District (Idoma) that will constitute one-third of those in attendance.

“It is in the light of the above that we wish to state loud and clear that for the record that any meeting of the State Working Committee called for the purpose of imposing either Hon Sam Ode or any running mate of the Governorship candidate is without the blessings of the leaders, Elders and other major stakeholders of Benue South and will therefore, remain unacceptable.

“Constitutionally, we are mindful of the fact that the Governorship candidate is empowered to pick his running mate after due consultations with relevant stakeholders without any interference.

“The consequences of this deliberate manipulation in the 2023 general election should be better imagined than real.

“Some aggrieved members are already on their way out of the party because of the ‘sole administor’ style the party is being run in the state.

The stakeholders maintained that Akume’s planned endorsement meeting was to undermine the Benue South expanded Elders and stakeholders convention held on 30th July, 2022, where over 12 aspirants for Deputy Governorship position were in attendance and a list arrived at in the meeting was forwarded to the National Secretariat of the party as instructed for possible selection of an acceptable candidate.

“Politics is not a one show or family affairs as being exhibited by Senator George Akume. This is evident in his desperation to impose his nephew on the Governorship candidate as running mate thereby undermining the collective interest of the Idoma and Igede people.

“It should be noted that members of the State Working Committee have shown to have compromised even long before now as evident in the fact that the Benue South Zonal Chairman of the party, Reverend Pinot Ogbaji had since last three weeks congratulated Hon Sam Ode even when there has been no official announcement of the deputy Governorship candidate by the party or the Governorship candidate”. 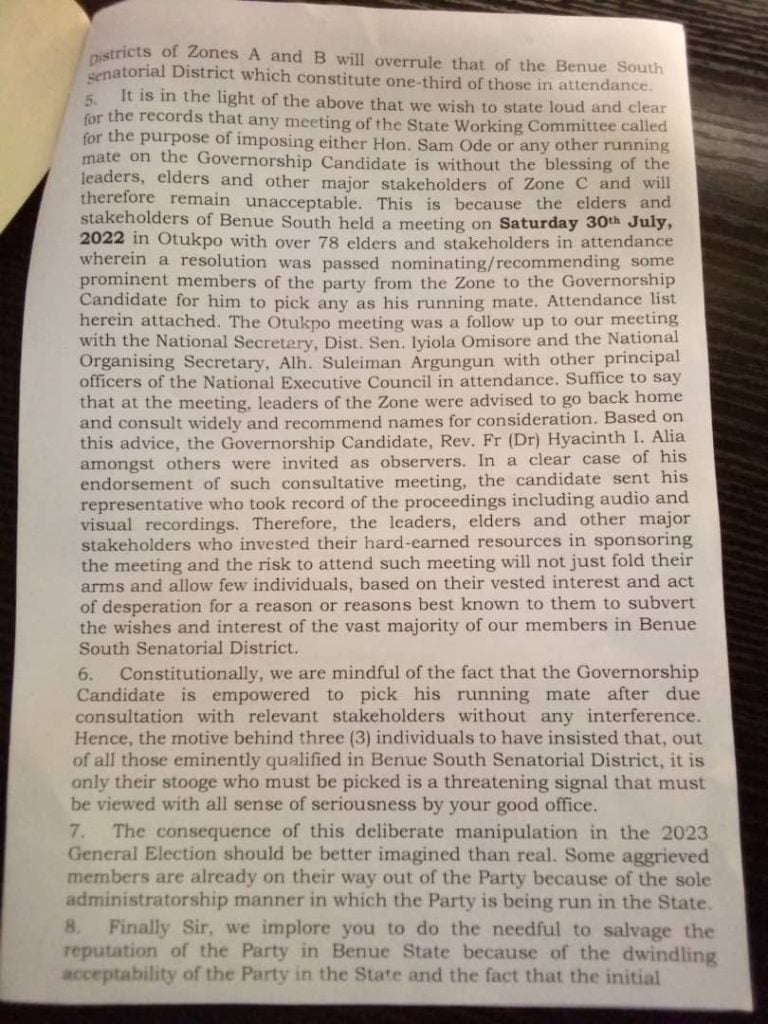 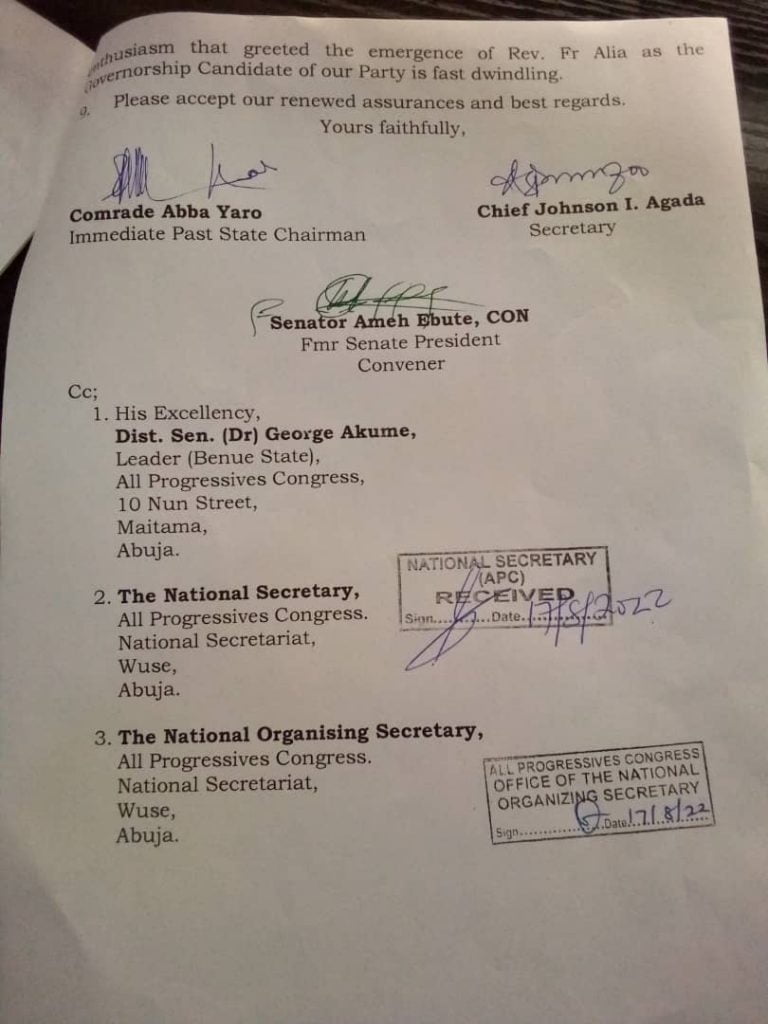