Contents hide
I. Violence erupts on the West Bank as Israel and Gaza exchange rocket fire for a second day in worst conflict escalation for more than a year
I.I. Share or comment on this article:

By Sam Merriman For The Mail On Sunday

Violence broke out on the West Bank for a second day as Israel and Gaza fired scores of rockets in the worst conflict escalation for more than a year.

At least 15 people were killed and 125 injured in the bombardment, including a five-year-old Palestinian girl and a senior commander of an Islamic militant group.

Israel said it had arrested 19 members of the Palestinian group Islamic Jihad in a series of raids after militants fired almost 200 rockets on Friday night.

Most had been intercepted by Israel’s Iron Dome aerial defence system with no Israeli deaths, but 13 people were taken to hospital with minor injuries.

The Israeli military has warned that the latest conflict – codenamed Operation Breaking Dawn – could be ‘lengthy’ and last for a week or more. 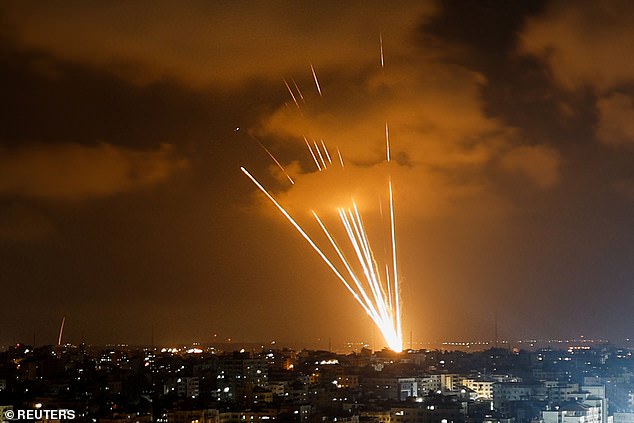 Rockets are fired by Palestinian militants into Israel on Friday night, amid the worst conflict in the area for more than a year

The violence is the most serious flare-up between Israel and Gaza since May last year when 256 people in Gaza and 14 people in Israel were killed over 11 days.

Israel said it launched its operation to eliminate ‘a concrete threat’ against its citizens and to target ‘terrorists and their sponsors’.

Palestinian Islamic Jihad said that the bombardment had amounted to a declaration of war and added that the group would ‘respond forcefully’.

The violence follows days of tension sparked by the arrest last Monday of Bassem al-Saadi, said to be Islamic Jihad’s commander in the occupied West Bank. 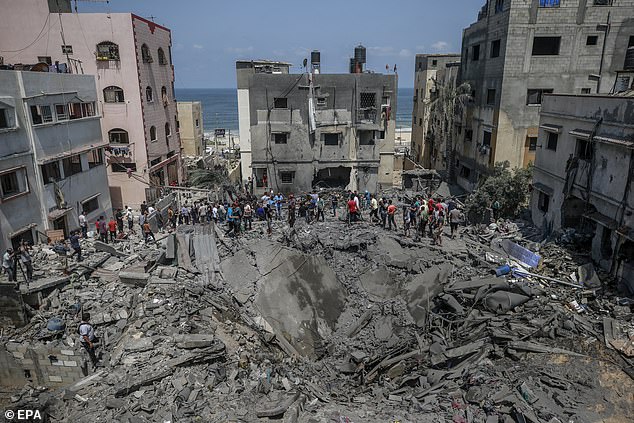 At least 15 people have been killed in the violence, including a five-year-old Palestinian girl. Pictured is a house in Gaza City destroyed by an Israeli air strike

The group is one of the strongest in Gaza, responsible for dozens of attacks against Israel.

Hamas, the biggest militant group with a similar ideology to Islamic Jihad, said ‘resistance groups’ were united and indicated it may respond to Israeli air strikes. If it does launch attacks the situation could escalate.

A match between and Juventus and Atletico Madrid in Tel Aviv was cancelled ‘in light of the current security situation’.