With little fanfare, a death notice for Sylvia Bunn was placed in the pages of a Sussex newspaper.

A Requiem Mass was followed by a burial at Bexhill Cemetery. No flowers were requested but it was suggested that donations could be given to the charity Help The Aged.

Few people knew Sylvia, a retired dentist’s widow. But it emerged that her will, written the year before her death, had given the clue to a remarkable family connection.

For those in the know, her birth name linked her to Camilla, Duchess of Cornwall, of whom she was the forgotten aunt.

Today, The Mail on Sunday can tell the fascinating life story of Sylvia. Although Camilla never met her and a spokesman at Clarence House declined to comment, it is believed the future Queen Consort is aware of Sylvia’s existence. 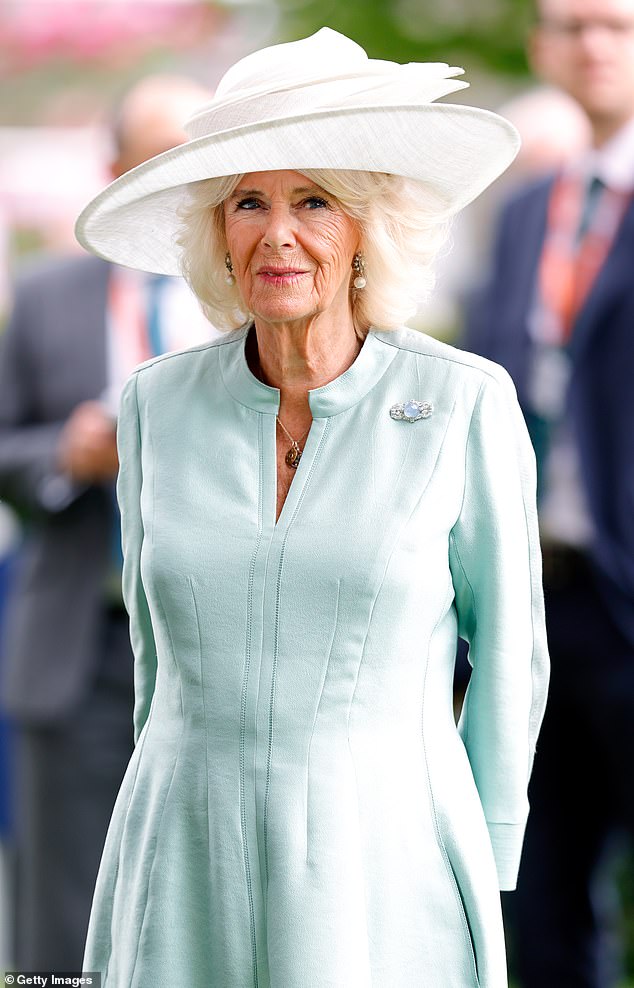 The Duchess of Cornwall, Camilla, has a forgotten aunt named Sylvia Bunn, the half-sister of Camilla’s father Bruce Shand 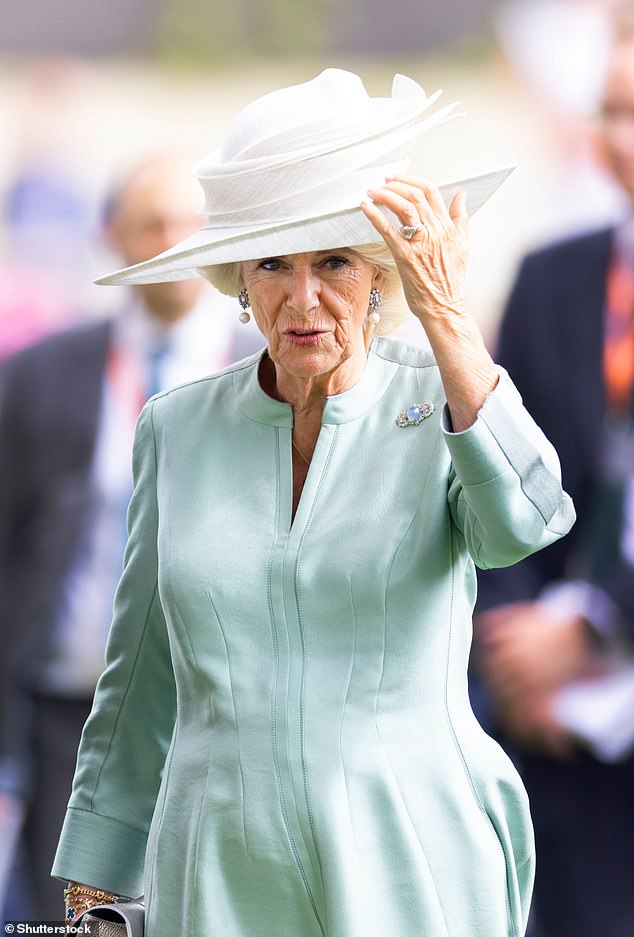 Sylvia was the half-sister of Camilla’s father Bruce Shand, and her life was largely lived away from England, in part to cloak the sadness at having been rejected by her family.

She was born in 1920, the daughter of Eton and Cambridge-educated journalist Philip Morton Shand, a serial adulterer whose life featured a string of mistresses whom he seduced in a chaotic, disorderly fashion.

The incorrigible but charming womaniser was married four times: first to Margot Harrington, a secretary, who gave birth to Camilla’s father Bruce in 1917, and secondly to Sylvia’s mother, Agatha Alys Fabre-Tonnerre, with whom he began an affair while Margot was pregnant.

It was not long before Alys, as she was known, a 25-year-old London University graduate from a distinguished French-Indian family and seven years his junior, also became pregnant.

The couple escaped to Edinburgh, where they holed up at the St Andrews Hotel in preparation for a hastily arranged wedding.

Two students were hauled off the street to act as witnesses, and just a fortnight after the nuptials, Alys gave birth to a girl they called Doris – a name the girl grew up to dislike and which she ditched in favour of Sylvia.

The newborn’s half-brother, Bruce, who had been cast aside in Morton Shand’s rush to consummate the latest love in his life, was barely a toddler.

Attempting to throw a discreet veil of modesty over the elopement and swift birth, Morton Shand and Alys stayed in Scotland for several months until they felt it safe to return to London.

But once again, the marriage was doomed to failure. The couple staggered on together for four years but then Alys, barely 30, petitioned for divorce in 1925 on the grounds of her husband’s adultery.

A month after the decree was granted, Morton Shand married for a third time – only for that relationship to end and for him to go on and marry his fourth and final wife.

Alys, whose mother had died in childbirth and whose father passed away when she was very little, had been brought up by relatives.

Also Read  Pete Davidson Back in L.A. with Kim Kardashian for Photo Shoot

As a young woman she understandably longed for a family and a home to call her own, but perhaps her dependency on Morton Shand, a man incapable of providing such a thing, proved her undoing. 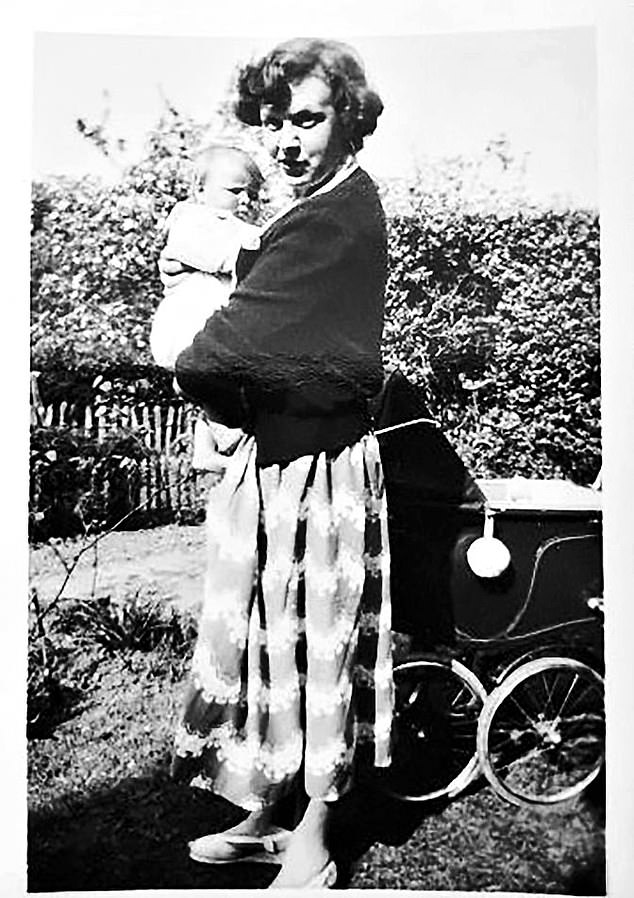 Sylvia Bunn (pictured) was born in 1920, to Philip Morton Shand, a serial adulterer whose life featured a string of mistresses whom he seduced in a chaotic, disorderly fashion

While he went on to establish a name for himself as a writer on subjects such as food, wine and architecture, and befriend the future Poet Laureate John Betjeman, Alys and their daughter Sylvia were forced to rely on charitable handouts from his parents.

This was possible because his mother was the heiress to a shipping industry fortune and able to bankroll her latest grandchild and ex-daughter-in-law.

But the cavalier Morton Shand had no time for his children. He barely ever saw Bruce, though they were briefly reconciled before his death in 1960. He never saw Sylvia again.

And so Sylvia’s lonely and peripatetic life with her mother began.

She had no siblings – her nearest blood relative being Bruce, but she never saw him either.

During her childhood years, leading up to the Second World War, Sylvia and her mother moved between flats in West London’s Maida Vale.

When Sylvia was 18, Alys took a job as a window dresser in a Kensington store to help pay her daughter’s university fees – for Sylvia had inherited her father’s fierce intellect, if not his love.

Eventually Alys moved to a flat in Malvern, Worcestershire. By now, Bruce had had a successful war (winning the Military Cross twice) and had married into the super-rich Cubitt family.

His wife, Rosemary, was the granddaughter of Edward VII’s mistress Alice Keppel.

Bruce developed a career as an upmarket wine merchant with a blue-chip company called Block Grey & Block, and divided his time between Kensington and a country house near Lewes in Sussex, where he embedded himself in the local gentry by joining the South Down Hunt.

In 1947, Camilla Shand was born – the same year that her aunt Sylvia took up a post teaching German at a technical school in Malvern.

‘Sylvia was a lively talker, very independent,’ recalls France-Odile Winter, whose mother was a fellow teacher.

‘She always dressed elegantly with high heels, she wore a hat and fur jacket – she was lovely. Forthright, but very charming.’ 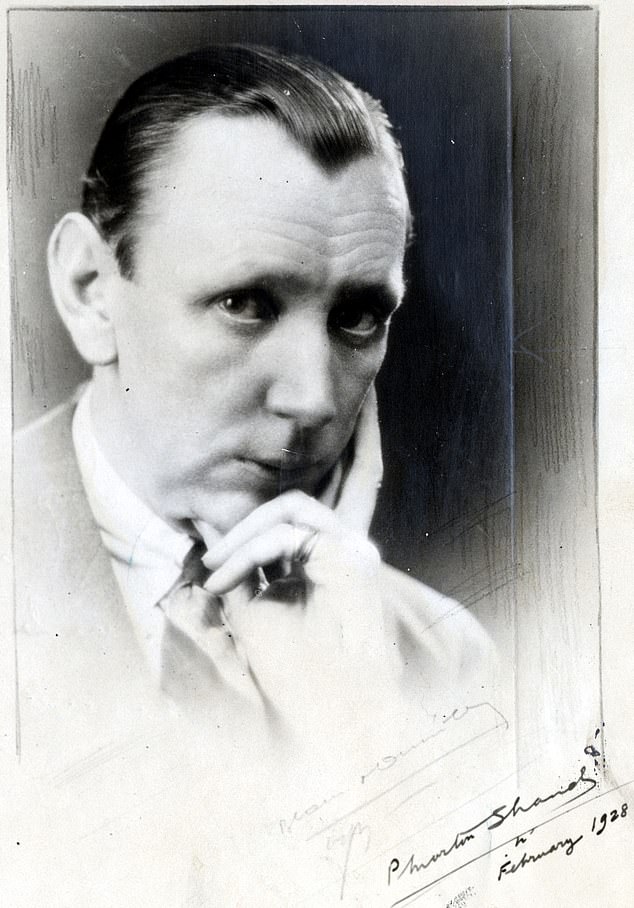 Philip Morton Shand (pictured) was an incorrigible but charming womaniser married four times: first to Margot Harrington who gave birth to Camilla’s father Bruce in 1917, and secondly to Sylvia’s mother with whom he began an affair while Margot was pregnant.

Sylvia became France-Odile’s godmother. It is hard to fathom why there was no romance in the life of someone quite so attractive, but Sylvia remained single.

She then took another teaching job, in Munster, northern Germany, and stayed in the country to teach for the next 20 years.

‘She was wedded to teaching,’ explains David Boorman, a close friend in her latter days. ‘Back then, teachers often remained single. That was her life.’

Many of her pupils from Munster kept in touch after they left school via letters and with visits, and it is clear that Sylvia was much loved by them.

Also Read  Kylie Jenner's inner circle: A look at the people who are closest in her life

By the 1970s, Alys had moved from Malvern to a flat in a converted house in Bexhill-on-Sea in Sussex.

Bruce was living less than 30 miles away in Plumpton, but there was never any contact between the pair, nor with Sylvia.

‘Sylvia never felt part of the family and she felt cut off from them – isolated and forgotten,’ says David Boorman’s wife Wendy.

‘But it wasn’t something she’d talk about. She’d say ‘I am part of the family’ – and that was that.

The fact she was part of the Shand family was mentioned on numerous occasions, but she never said, ‘I am Camilla’s aunt.’ ‘

At about this time, Camilla was being schooled in the ways of becoming a successful debutante. 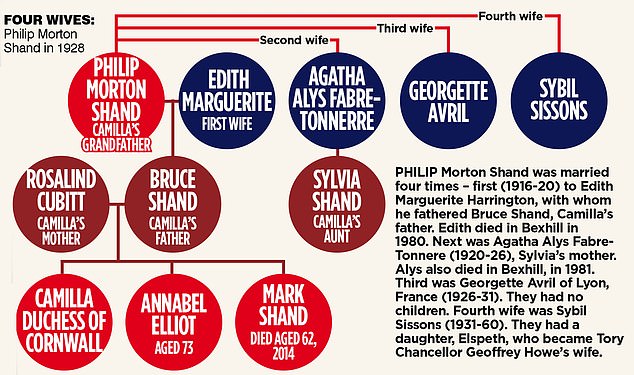 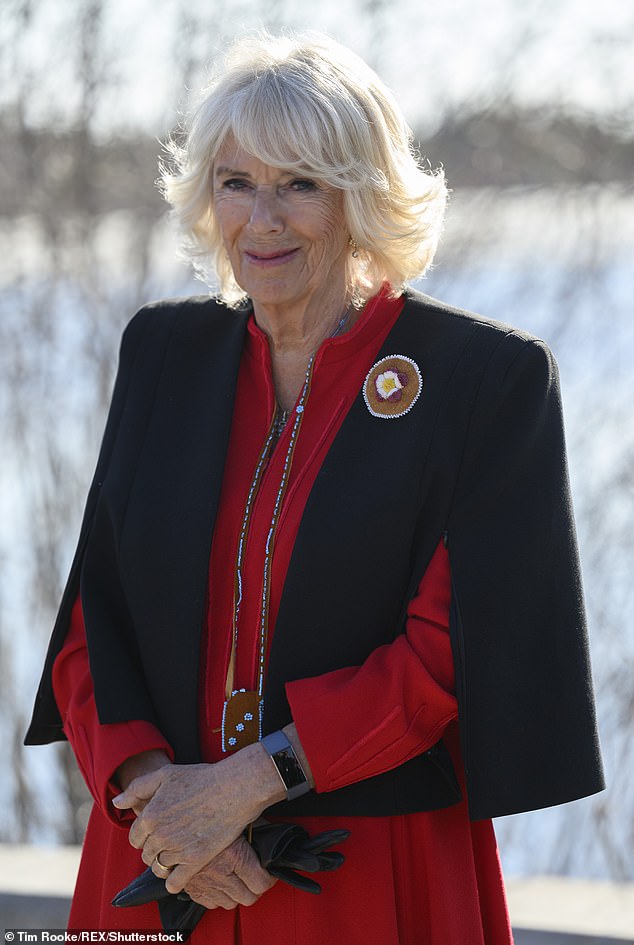 When Camilla married Prince Charles at Windsor in 2005 to worldwide headlines, Sylvia sat in her modest Bexhill villa and watched the proceedings on TV – she hadn’t been invited

How very different from her aunt Sylvia, who at the time was earnestly marking the homework of her German students and counting her pfennigs.

A family friend says: ‘Bruce Shand can’t be accused of blanking Sylvia’s side of the family.

‘As the son of Philip Morton Shand, he’d also struggled with his own demons. His father ran off and his mother gave him over to his grandparents, so he was effectively orphaned.

‘Imagine handling that, and coming out the polished, genial character that he was.

‘Trying to make his way in the post-war world, there was no time for stray relations, even though Sylvia was almost the same age.

‘Regardless, it was tough on Sylvia – he had his family, she had nobody.’

Accordingly, when Camilla achieved her long-held ambition of marrying cavalry officer Andrew Parker Bowles in 1973, Sylvia and her mother were not on the guest list of the glittering ceremony at the Guards’ Chapel, Wellington Barracks, near Buckingham Palace.

And by the time the secret love affair between Camilla and Prince Charles became public knowledge, Sylvia’s mother had died – never having reconciled with her other family.

In due course, Sylvia returned to Britain from Germany to live in Bexhill. Her mother had died in the South Coast resort and there was nobody in the town she knew. Once again, she was alone.

But one day, while visiting her bank, a man smiled at her – courteously, shyly. She was 66, he was 77. It was an autumn romance.

Her suitor was a retired dentist named Norman Bunn – hardly the degree of person that her high-rolling half-brother, Bruce, now Vice Lord Lieutenant of East Sussex, would be seen mixing with.

Indeed, with exquisite irony, Camilla’s great-aunt Violet Trefusis, the socialite and lesbian lover of the writer Vita Sackville-West, is said to have once snubbed a possible future husband on the grounds that ‘all his friends are dentists’. But such snobbery would not have mattered to Sylvia.

She and Norman married in November 1987, soon after her 67th birthday, and their marriage gave her profound happiness.

‘And do you know,’ she confided delightedly to her friend Wendy Boorman, ‘he kissed me on the stairs!’ 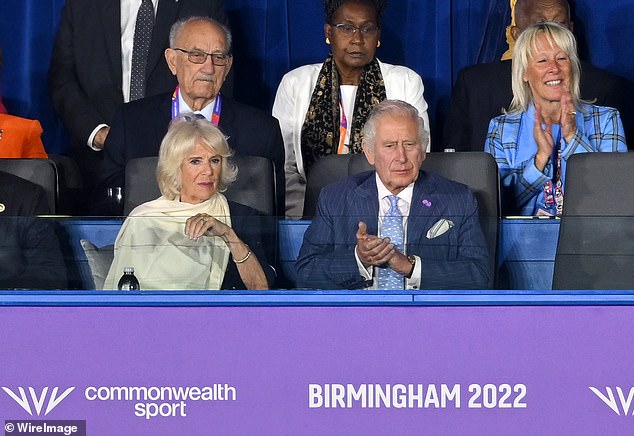 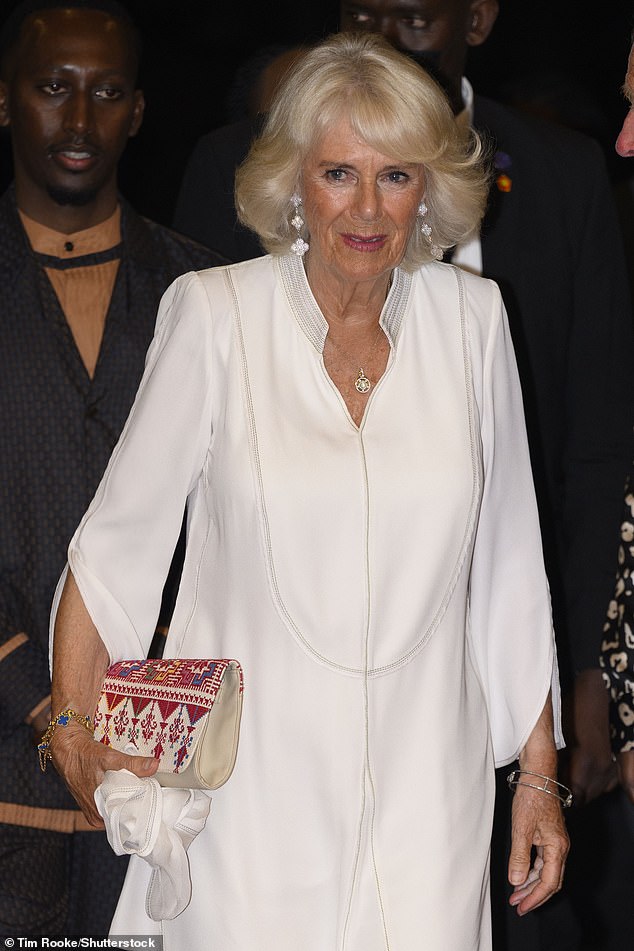 At last, the chaotic destruction wrought by her father – Camilla’s grandfather – could be forgotten.

Sylvia enjoyed ten years of married life before her husband died aged 88 in 1998. Life was far from over for her, however.

With a new lease of life, she took up driving – though her progress was erratic, according to David Boorman.

‘Twice she drove her car through the back of the garage. As a driver, she was pretty diabolical.

‘She got pulled up by the police and was made to take another test in her 70s. When the examiner asked her to do a reverse manoeuvre, she snapped, ‘I don’t reverse!’ ‘

And to that small coterie of friends in and around Bexhill, Sylvia seemed no more than a lively and unusual upper-class relic of a bygone age.

She never talked about her Royal connections. The most she would say was that she was ‘a part of’ the Shand family.

Friends deduced from her reticence that perhaps she was illegitimate, or for some other reason not accepted somehow. They didn’t delve.

(By a strange coincidence, Sylvia’s mother and her ex-husband Morton Shand’s first wife, Margot, lived within three miles of each other on the Sussex coast in their final years. They never met, but died within a week of each other.)

When Camilla married Prince Charles at Windsor in 2005 to worldwide headlines, Sylvia sat in her modest Bexhill villa and watched the proceedings on TV.

Again, she hadn’t been invited. Her friend Wendy Boorman says: ‘She never said ‘That’s my niece who’s going to become the next Queen of England’, but you can only imagine what her feelings were.’

Clearly, Camilla’s family are aware that her father’s four-times-married father had other children.

Describing his great-grandfather’s ‘less exalted home life’, he said: ‘After divorcing my great-grandmother in 1920, he went on to marry Alys Fabre-Tonnerre that same year (with whom he had his second child, Sylvia).

‘But five years later, Alys petitioned for divorce on the grounds of his adultery.’

After a short spell in a Bexhill nursing home, Sylvia, the aunt that Camilla never met, died at the age of 87.

She chose not to be buried with the man she’d come to love late in life – Norman Bunn wasn’t Catholic – but with her mother, Alys.

Two forgotten women who’d been cheated of the pleasures of family life were united at the last.