Prince Andrew was pictured riding a horse at Windsor Castle today amid his ongoing money troubles –  after being called an ‘absolute fool’ because sale of his £18m Swiss chalet has been frozen so more debtors can claim £1.6million from him.

The Duke of York, 60, appeared to push his worries aside as he donned a blue coat and helmet and opted for a warm summers day horse ride, accompanied by a male groom.

Princess Eugenie and Princess Beatrice’s father, who lives at the Royal Lodge just three miles away, appeared downcast as he rode through the grounds.

It comes days before his first public appearance since his father Prince Philip’s memorial service, with the royal expected to attend a service to mark Garter Day at Windsor Castle on Monday with other members of the Royal Family. 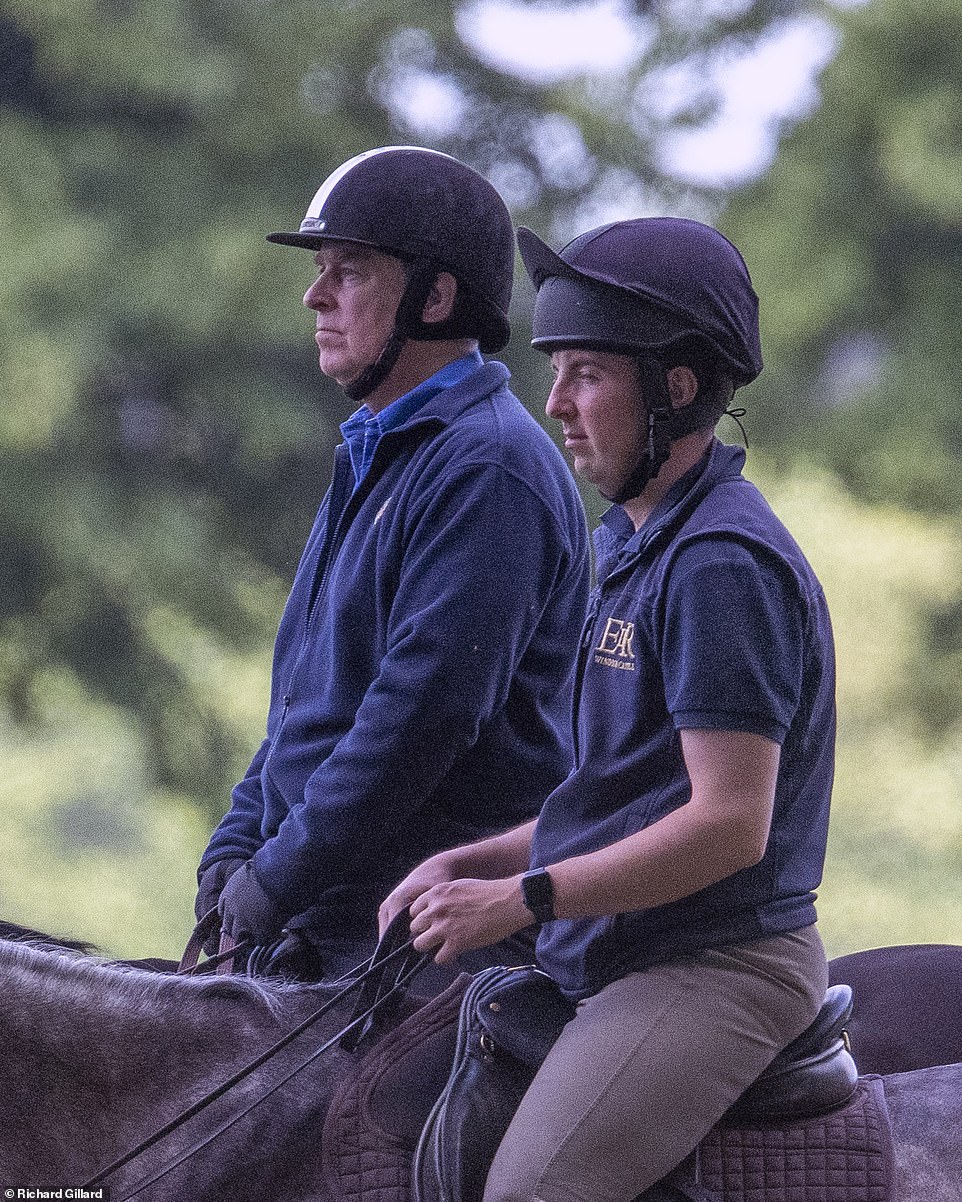 Prince Andrew, 60, was pictured riding a horse at Windsor Castle today amid his ongoing money troubles – as he prepares for his first public appearance since April

The monarch’s disgraced second son stepped down from public life after the furore over his friendship with paedophile billionaire Jeffrey Epstein, and paid millions to settle a civil sexual assault case to a woman he claimed never to have met.

Andrew was cast out of the working monarchy and no longer uses his HRH style after Virginia Giuffre, who was trafficked by Epstein, accused him of sexually assaulting her when she was 17. The Duke denied the claims.

Earlier today, it emerged a freezing order has been placed on the Duke of York’s controversial £18million retreat in the Swiss resort of Verbier which is in the process of being sold – reportedly to help him pay off sex abuse accuser Virginia.

The legal move will guarantee that a Swiss couple, with whom the duke struck up a business arrangement, will receive the reported £1.6million owed to them by the Queen’s second son, sources have said. 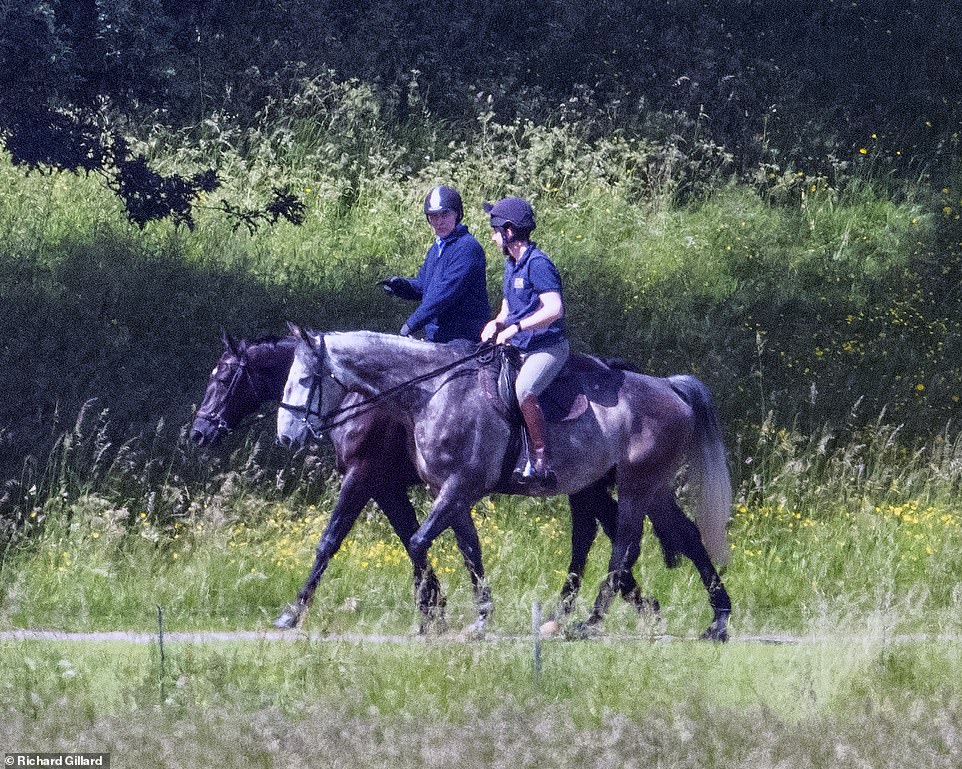 The Duke of York, 60, appeared to push his worries aside as he donned a blue coat and helmet and opted for a warm summers day horse ride, accompanied by a male groom

The disgraced royal had previously owed Isabelle de Rouvre more than £6million for the chalet until last year.

Miss de Rouvre said she pities the couple, whose identity is being kept secret, knowing the stress she experienced trying to recoup the money owed to her after she sold Chalet Helora in Verbier to Prince Andrew and Sarah Ferguson in 2014.

She said: ‘It was a horrible experience. I do not understand how he operates and I feel very sorry for people who are involved with him in business.’

Sources close to the duke insist the freezing order is not holding up the chalet’s sale.

Removal vans from a UK firm given a Royal Warrant by the Queen in 1981 were spotted at the property this week. Sources confirmed they were removing items on behalf of the duke. 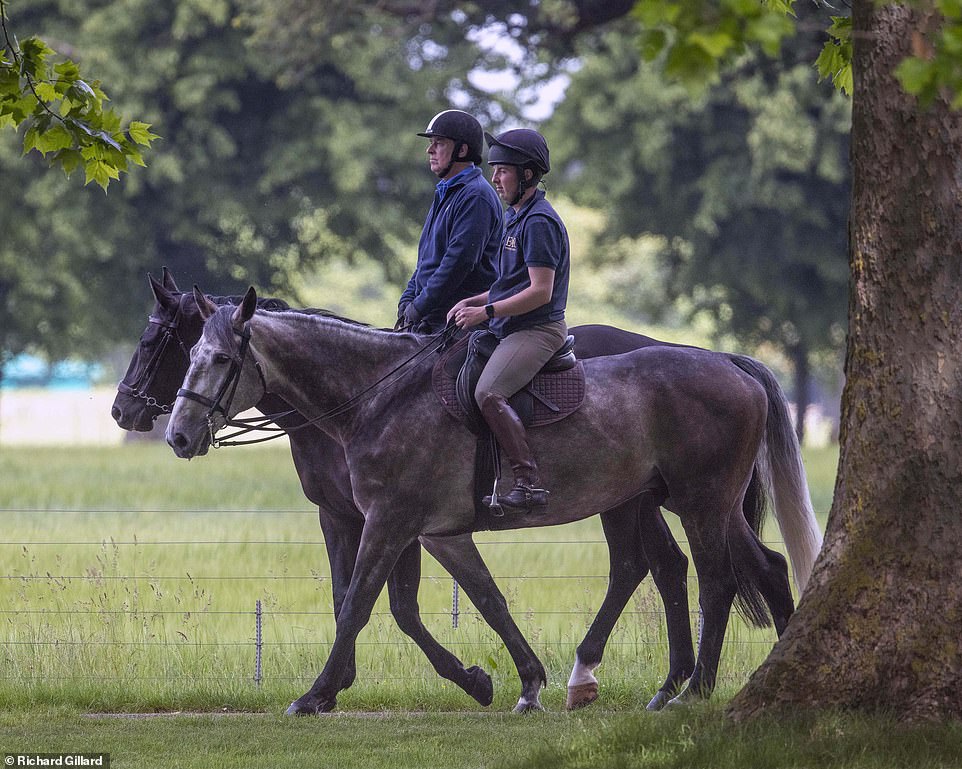 Princess Eugenie and Princess Beatrice ‘s father, who lives at the Royal Lodge just three miles away, appeared downcast as he rode through the grounds

A buyer was believed to have been found some months ago but the process reportedly stalled because the chalet is ‘under sequestration’ as a result of the new debt.

The chalet was frozen as an asset by Swiss authorities on December 15, 2020, according to Le Temps newspaper.

It is the latest controversy to emerge surrounding the beleaguered prince and his ties to Verbier. 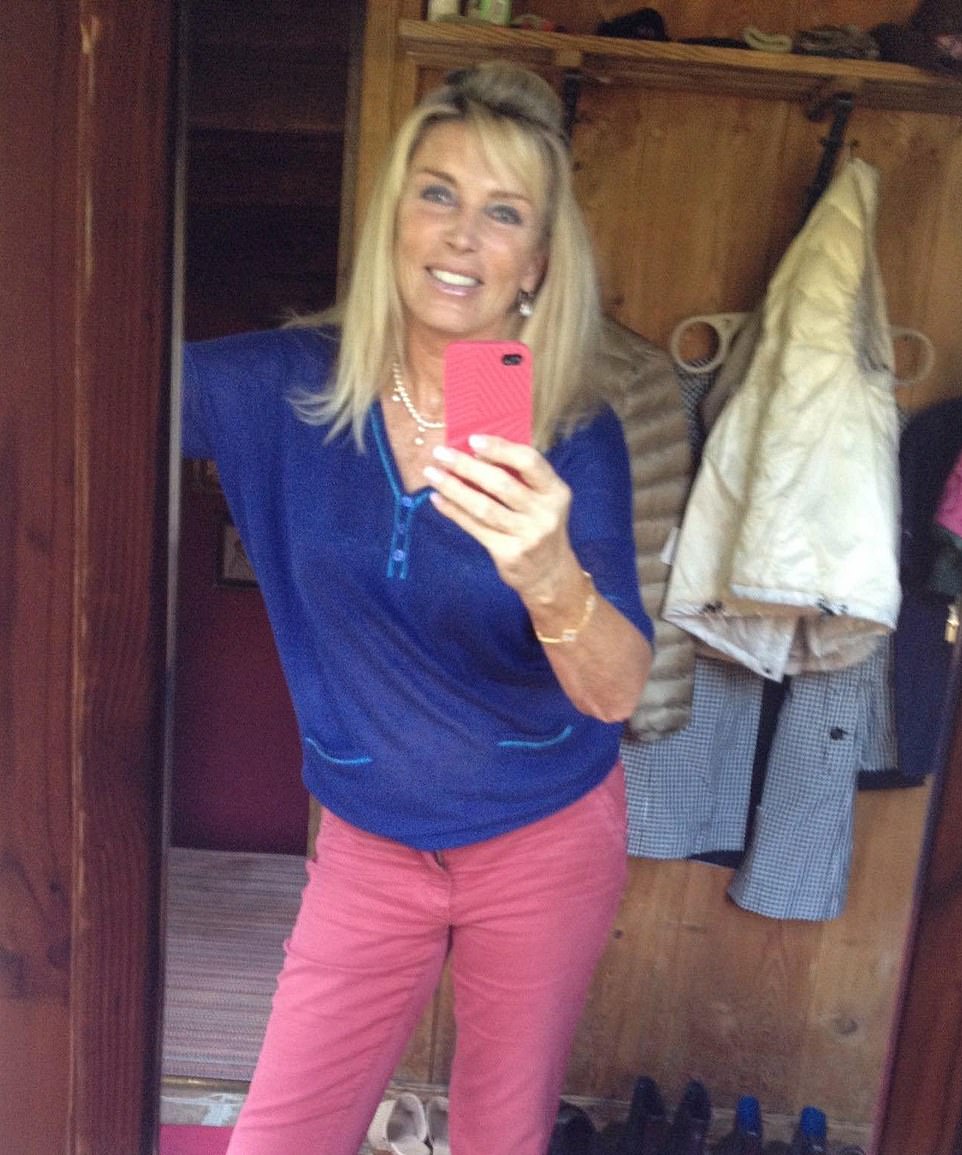 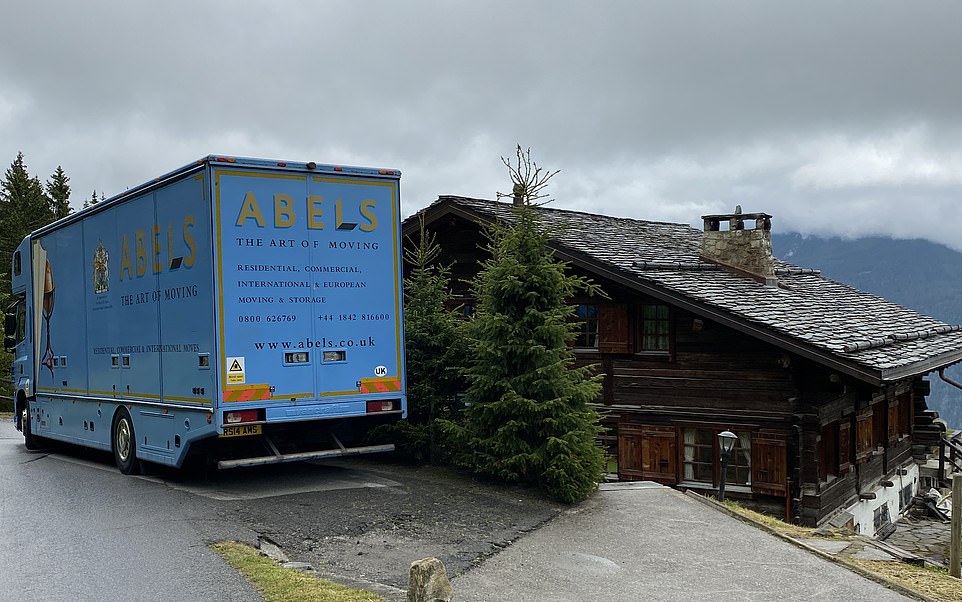 Sources confirmed that removal vans from the UK were at the Verbier property this week and were removing items on behalf of the duke. The chalet was frozen by Swiss authorities in December 2020

The long-running battle with the chalet’s previous owner, Miss de Rouvre, over the £6.6million debt was only resolved last year.

She said: ‘It’s really rather unbelievable. He caused me such stress and now it’s claimed other people are owed money too.

‘They [Andrew and Sarah] are so crazy. He [Andrew] is an absolute fool and I just cannot understand how he goes about his life.’

Miss de Rouvre had been forced into a legal battle two years ago to recoup the vast sum.

She had sold Chalet Helora to her then-friends Andrew and his ex-wife Sarah Ferguson in 2014 for £18million. But they failed to pay a cash amount of £5million.

She agreed it could be deferred until December 2019, with interest accruing, but later accused the pair of failing to honour the agreement.

A source close to the Duke of York said of the £1.6million debt: ‘Talks are under way to resolve the matter, which are expected to be concluded satisfactorily for all parties, but it in no way prevents the sale of the chalet.’ 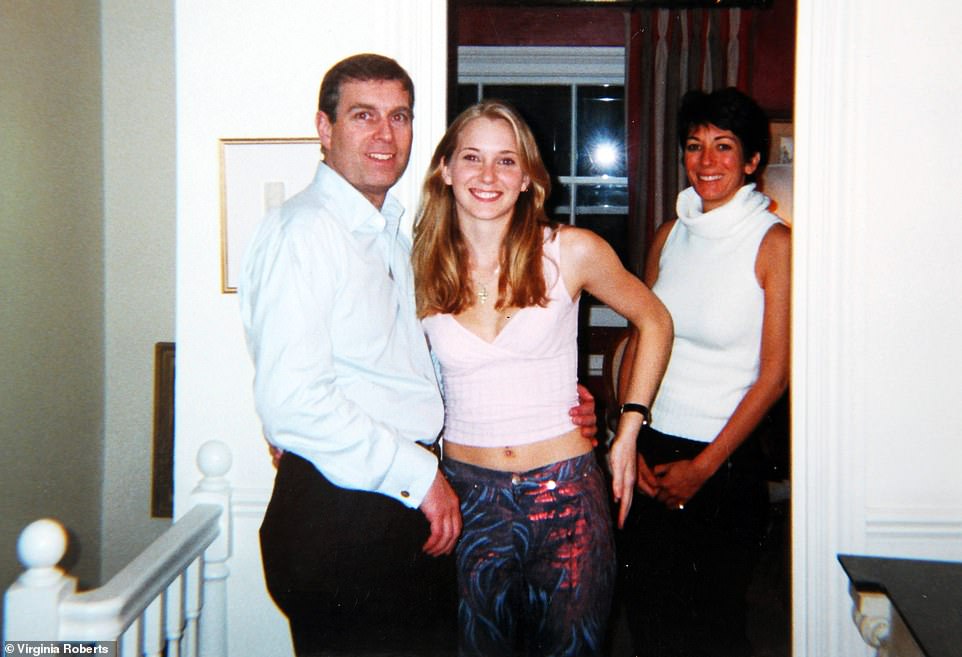 Pictured: Virginia Roberts with Prince Andrew and Ghislaine Maxwell in early 2021. It’s believed the sale of the controversial Swiss retreat would have helped the duke pay off Miss Roberts

Andrew’s appearance comes as he is expected to be at the service at St George’ Chapel in Windsor for members of the Order of the Garter on Monday.

The Duke could even walk in procession from Windsor Castle to the chapel with other Royal Family members, before returning to the castle in a carriage.

Buckingham Palace has not yet confirmed whether the Queen will attend the service, which is one of the most important dates in the annual royal calendar and is returning for the first time in three years since it was last held in June 2019.

A source close to Andrew told Newsweek that he is ‘still planning to attend’ the service, which will see also Camilla installed as a Royal Lady of the order.

Before the Jubilee weekend, Archbishop of Canterbury Justin Welby had suggested Andrew was ‘seeking to make amends’, adding: ‘I think that’s a very good thing.’

Andrew took a central role in escorting his mother to the Duke of Edinburgh’s memorial service at Westminster Abbey in March. 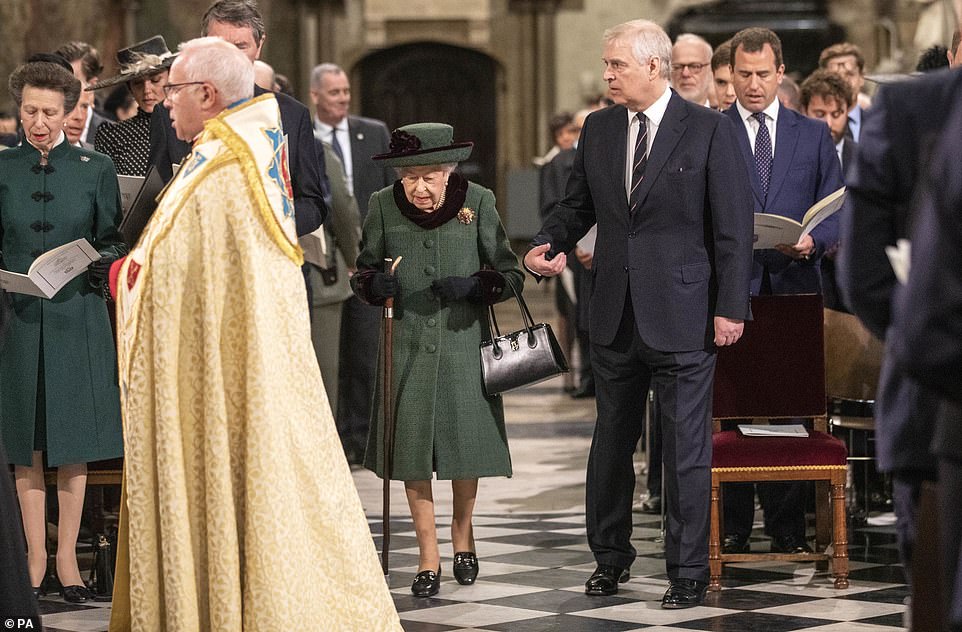 It came as a surprise change to the planned arrangements – only weeks earlier he had been banished from royal public life and paid to settle his court case. The move was taken as a sign of the monarch’s support for her son.

At the service next Monday, former prime minister Sir Tony Blair will be installed as a Knight Companion of the order, the oldest and most senior British Order of Chivalry.

Former United Nations under-secretary Baroness Amos will be installed as a Lady Companion of the order, established by King Edward III nearly 700 years ago.

The Order includes The Queen, who is Sovereign of the Garter, several senior Members of the Royal Family, and 24 Knights or Ladies.