A plus-size travel blogger has opened up about the difficulties she faces on airlines as a ‘fat’ person – candidly documenting her struggles to fit in plane seats and bathrooms, revealing she is often forced to purchase two seats in order to travel ‘comfortably’.

Jae’lynn Chaney, 25, from Vancouver, Canada, regularly jets off to exotic locations across the globe and shares her experiences on TikTok, including the struggles of being a size 6XL.

The influencer has seen her weight fluctuate throughout the years, particularly after she was diagnosed with polycystic ovary syndrome (PCOS) in and pulmonary hypertension, high blood pressure in the blood vessels connected to the lungs, in 2019 – which caused her to gain 100lbs.

In a series of clips, which have since gone viral with millions of views, the influencer shows how airlines don’t cater to larger sizes – with seats too small for her frame and her partner Jacob Ard barely able to squeeze into tiny toilet cubicles. 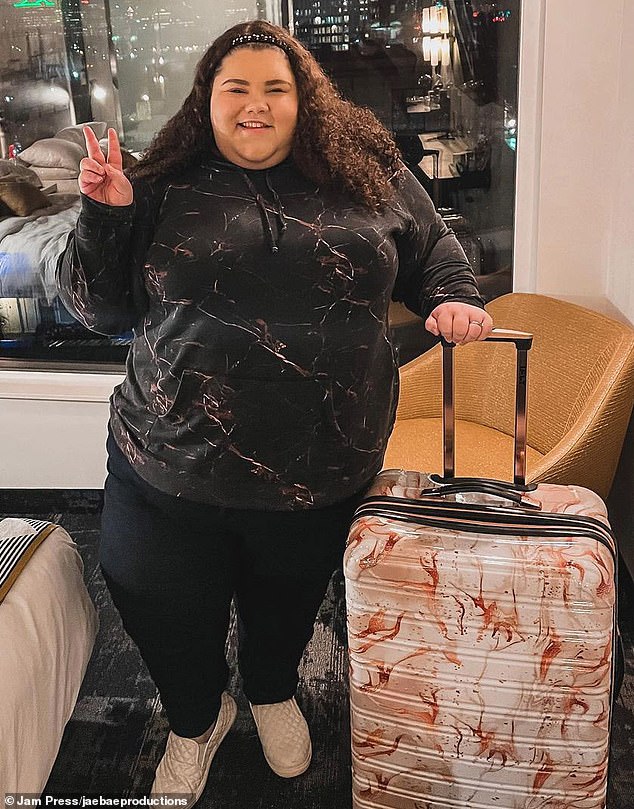 A plus-size travel blogger has taken to TikTok to share what it’s like traveling as a ‘fat’ person who wears a size 6XL, revealing that many have said she is ‘going to cause a plane crash’ 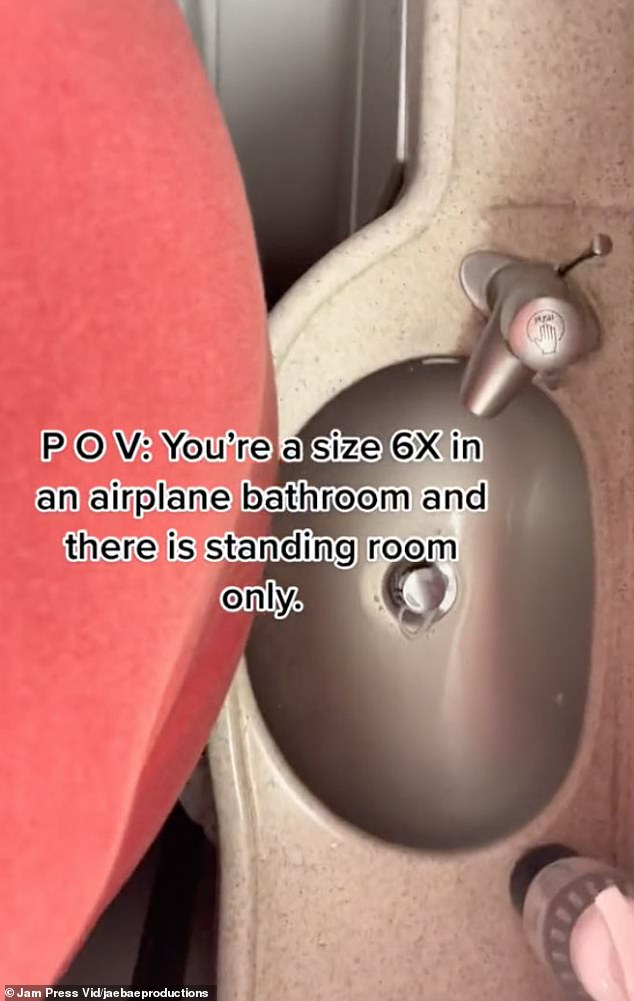 Jae’lynn Chaney, 25, shared a video which has since gone viral of her fiancé in the airplane bathroom, noting that there is ‘standing room only’ 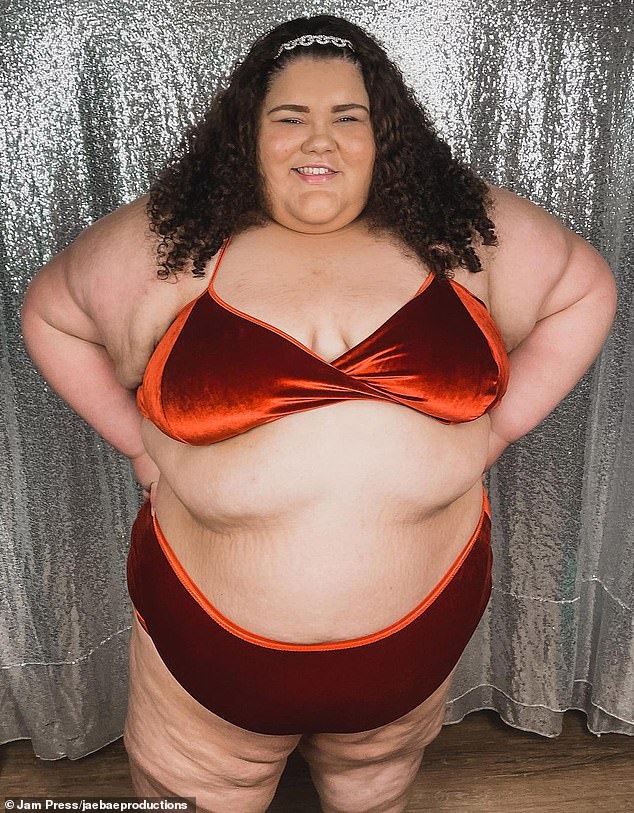 The Canadian blogger has seen her weight fluctuate since receiving a diagnosis of polycystic ovary syndrome in 2019, during this time she ‘gained over 100 pounds’

When traveling Jae’lynn has to make certain adjustments, explaining: ‘Someone my size is almost forced to purchase two seats in order to fly comfortably, which makes travel inaccessible to people who can’t afford the additional costs.’

‘I find that many situations surrounding plus size travel are the least accommodating of my weight.

‘From public transportation with seatbelts that don’t fit me, or seats that are too small, to plane bathrooms that I can’t even fit in – travelling as a plus size person comes with many challenges.

In high school, Jae’lynn was a size 2XL, but after being diagnosed with polycystic ovary syndrome, she ‘gained hundred of pounds.’ 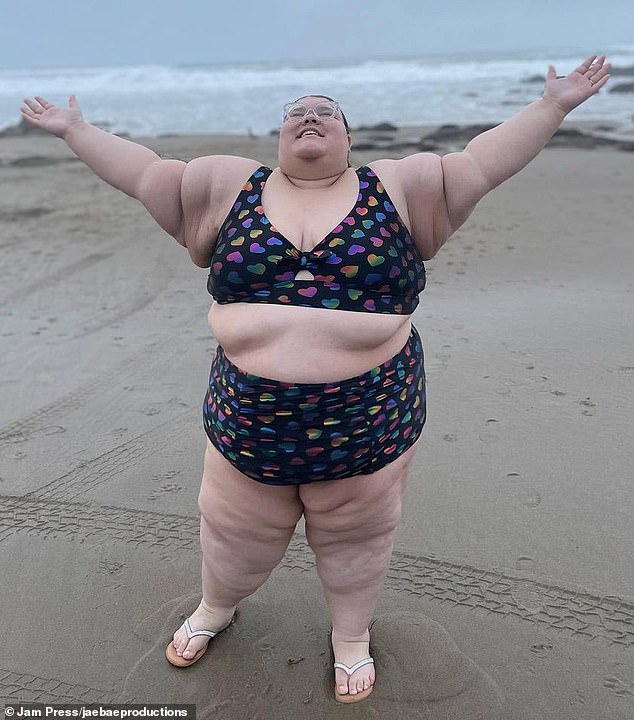 Jae’lynn noted that ever since becoming ill, she has lived ‘with chronic pain and disabilities’ 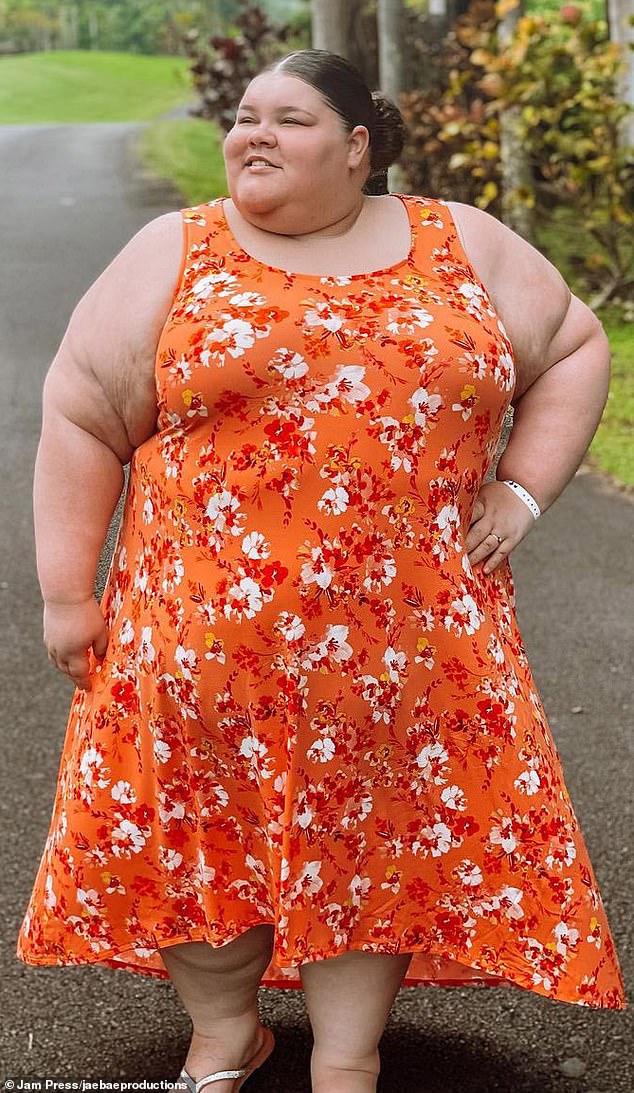 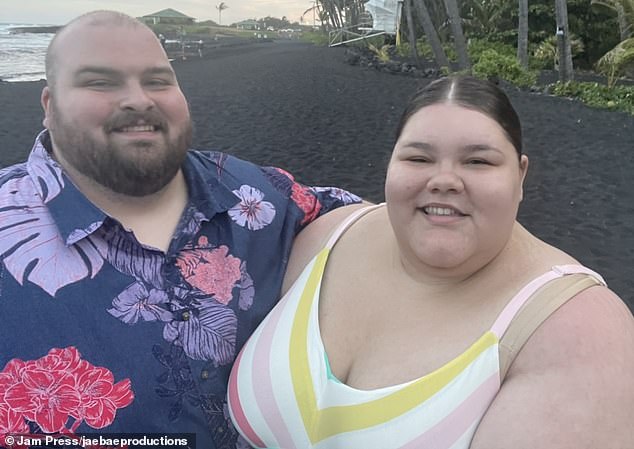 In her most popular video, Jae’lynn shared her fiancé Jacob Ard, barley being able to fit in the airplane bathroom 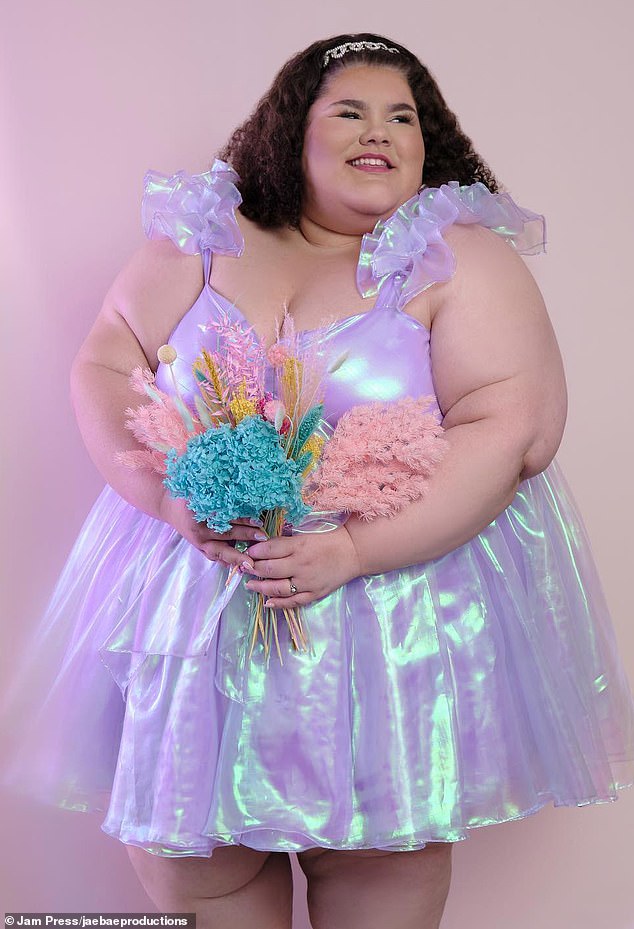 After Jae’lynn graduated college in 2018, she became very sick and it doctors ‘over a year’ to figure what was going on.

The next year, 2019, she was in and out of the hospital and was determined ‘medically housebound’ when she first received her diagnosis.

During that year, Jae’lynn ‘gained over 100 more pounds.’

Now Jae’lynn says ‘not only am I plus size, but I also now live with chronic pain and disabilities.’

In her most popular clip, which has three million views, she shows her partner trying to move around in a tiny toilet cubicle as his body touches almost every surface.

In the post, she wrote: ‘I get asked how the airplane bathrooms are for someone my size all the time so I thought I’d show you what it’s like from my fiancés point of view.’

Social media users have flocked to the comments section to share their views.

Many social media users have been supportive of Jae’lynn, but some have been negative, including one user who told her she was ‘going to cause a plane crash’

In another clip, shared with the hashtag ‘#flyingwhilefat’, Jae’lynn shows the harsh limitations of aircraft design by struggling to pull down a tray table.

She also flashes a seatbelt extender she had been given because a typical seatbelt didn’t strap around her properly.

What is polycystic ovary syndrome?

Jae’lynn said that one person in her comments said that she’s ‘going to cause a plane crash because of my size.’

Despite her struggles, Jae’lynn is determined to prove to her followers that they can love their body, no matter their size – and enjoy travelling too.

She said: ‘When I talk about exercise, I focus on movement that brings us joy and makes our bodies feel good.

Jae’lynn is not focused on weight loss at the moment, she’s much more ‘focused on doing what makes my body feel good and what makes me happy.’

Through her positive attitude and social medias media she hopes to show ‘that bodies of all sizes and abilities are just as worthy as those who fall into the societal norm of beauty.’

Jae’lynn notes that ‘bodies change and fluctuate over time,’ and she believes it’s important to ‘love and embrace our body at every stage of life.’

By documenting her experience, Jae’lynn is ‘creating representation and empowering people to live their life to the fullest,’ and showing everyone ‘they can travel the world if it’s what they dream of.’