Cops have filed new charges against an accused serial sex predator who they say terrorized dozens of women in Florida the 1980s, thanks to DNA taken from the 62-year-old suspect’s son that helped detectives link him to six such cold cases.

Robert Koehler is currently being held in Broward County on the charges, which cops say fit the modus operandi of the so-called ‘Pillowcase Rapist’.

Dubbed the ‘Pillowcase Rapist’ by the press due to the fact the assailant would cloak the heads of his victims – and in some cases, his own – in a pillowcase during the sordid attacks, police had been unable to produce a suspect – until now.

On Tuesday, the sheriff of Broward county, Gregory Tony, announced that Koehler had become their primary suspect in the cold case, during a presser that saw cops air video of the suspect’s now elderly alleged victims speaking out against Koehler.

A release from the department added that ‘On at least eight occasions in 1984 and 1985, detectives believe Koehler snuck into homes in Broward County late at night or in the wee hours of the morning through unlocked doors and attacked his victims.’

One of Koehler’s alleged victims, who identified herself only as Carolyn, said in a clip aired by the department: ‘This guy is a horrible, evil, dangerous predator.’

The woman, visibly emotional, added: ‘You deserve to be put away and never come out.’ 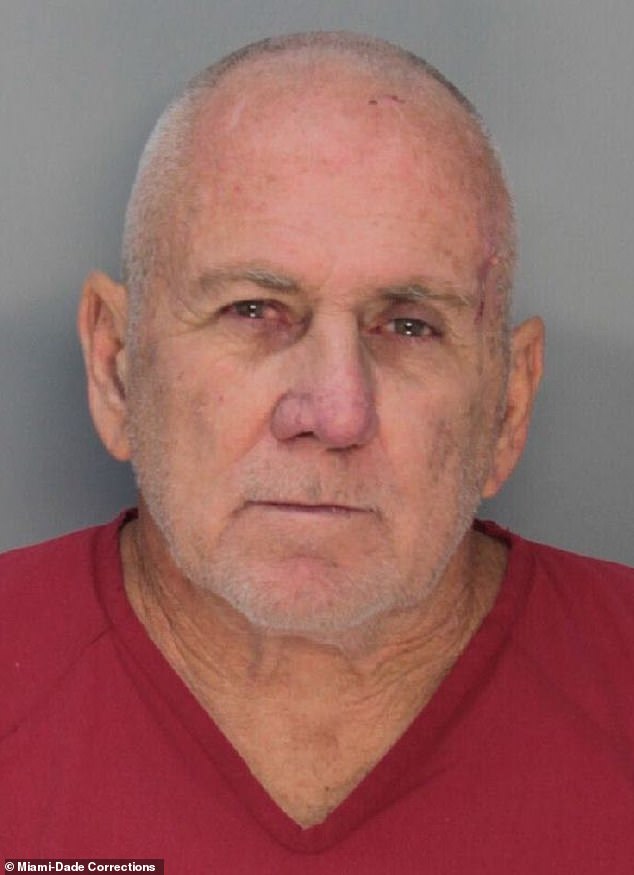 Robert Koehler, 62, is currently being held in Broward County on the charges, which cops say fit the modus operandi of the so-called ‘Pillowcase Rapist’ who terrorized the southern part of the state for several years

‘It makes me feel like it was worth it – like my life could make a difference,’ another emotional alleged victim, named only as Catherine, told the court of the arrest – one more than four decades in the making.

Koehler, a resident of Palm Bay, had already been in the custody prior to the presser Tuesday, cops said, after being arrested in 2020 for a rape of a woman in Northwest Miami-Dade in 1983.

Police revealed that DNA taken from that scene matched samples from a number of cases between 1981 to 1986 left by the ‘Pillowcase Rapist,’ Miami-Dade State Attorney Katherine Fernandez Rundle said during the presser. 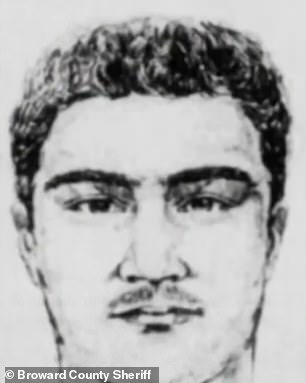 Koehler is currently being held in Broward County on the charges, which cops say fit the modus operandi of the so-called ‘Pillowcase Rapist’ – pictured here in a 1986 police sketch

Cops now say 62-year-old Koehler may be responsible for as many as 45 rapes in the Sunshine State.

For years, cops struggled to discern the identity of the Pillowcase Rapist, who would break into unsuspecting women’s apartments and homes to rape them at knifepoint.

During the attacks, the majority of which took place between 1981 to 1986, the assailant would shroud his victims’ heads with a pillowcase or some other sort of fabric, sometimes wearing one over his own face.

The suspect left investigators with little to go off of, leaving little evidence behind at each crime scene.

In 1985, police formed a specialized task force tasked with catching the serial predator.

After investigating hundreds of leads, interviewing dozens of suspects, and engaging in hours of stakeouts, cops still came up empty, going off vague clues provided by the traumatized victims – and the task force was disbanded.

Koehler, however, police said Tuesday, did not stop his attacks, and was eventually arrested in 1990 after breaking into a woman’s apartment in Palm Beach County and raping her.

At the time, detectives did not link the case to the still-at-large Pillowcase Rapist, despite the similarities to the then years-old attacks that had transpired in nearby cities.

Cops revealed Tuesday that after being found guilty and convicted in the 1990 case, Koehler’s DNA was not put into a police database – further hampering their investigation.

However, nearly 30 year later, shortly after Koehler’s 2020 arrest for the Miami attack, cops began to zero in on the suspect, thanks to the hunch of one eagle-eyed cold case detective who noticed similarities between the case and previous attacks by the Pillowcase Rapist. 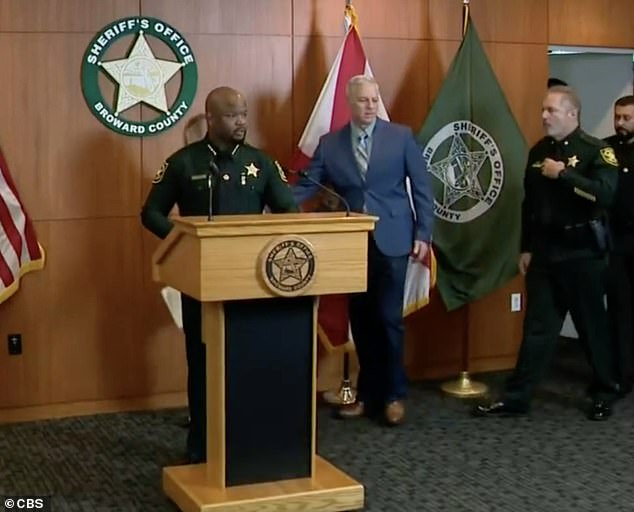 On Tuesday, the sheriff of Broward county, Gregory Tony (at left), announced that Koehler had become their primary suspect in the case thanks to recent breakthroughs spurred by new DNA technology and an attentive cold case officer

Investigators also said they were able to identify Koehler by analyzing familial DNA taken from Koehler’s son, who police obtained a DNA sample from after his own arrest for a 2020 domestic-violence case.

His DNA was similar enough to the suspect’s that investigators believed the unknown assailant was his father.

Cold Case Unit Sergeant Kami Floyd, meanwhile, began to investigate the case in 2019, and stumbled across the case of the woman who was brutally assaulted at knifepoint in her Pompano Beach apartment in June 1984.

The victim’s account of the attack said that the assailant had used a pillowcase to cover his face during the break-in, spurring Floyd to connect the dots and classify the attack as the likely work of the Pillowcase Rapist.

Police had believed for years that the same suspect was responsible for each of the attacks due to DNA samples taken from the crime scenes, but due to a lack of technology at the time time, they did not know who that suspect was. 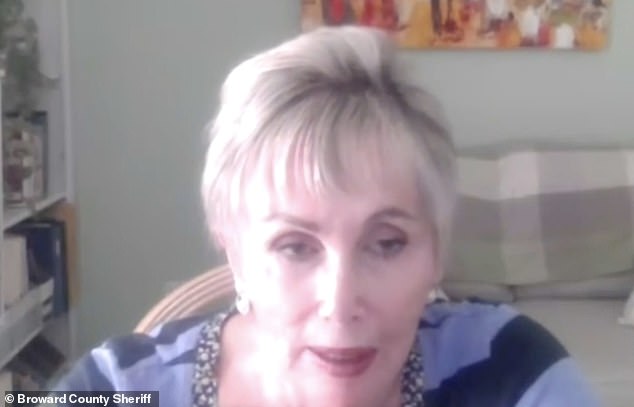 The presser saw cops air video of the suspect’s now elderly alleged victims speaking out against Koehler, including one who identified herself only as Carolyn. She told the court that he ‘is a horrible, evil, dangerous predator’ who deserves ‘to be put away and never come out’ 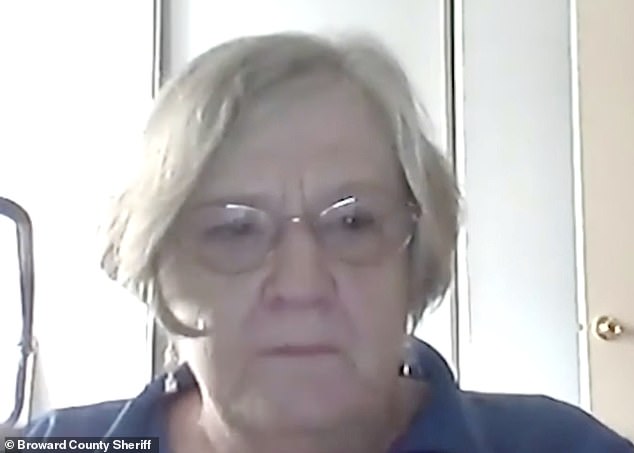 ‘It makes me feel like it was worth it – like my life could make a difference,’ another emotional alleged victim, named only as Catherine, told the court of the arrest, more than four decades in the making 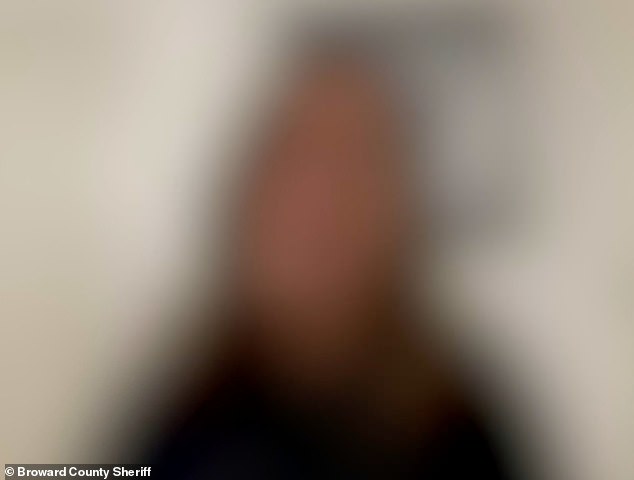 A third victim, whose face was blurred by the court, said, ‘It gives me closure, a little piece of mind, knowing that he finally got caught’

‘At the time (of the assaults), all we had was blood typing,’ Floyd said in a video aired at Tuesday’s presser. ‘With this new technology that we have, we were able to retest the specimens and get a full DNA profile of our suspect.’

Koehler, who by then had fallen under suspicion for the Fort Pompano attack after investigators noticed similarities with the DNA taken from Pillowcase Rapist crime scenes and samples taken from Koehler’s son after an unrelated arrest, was cuffed in the Miami-Dade days later, in January of that year.

The Miami-Dade State Attorney’s Office soon announced that the DNA linked Koehler to at least 25 attacks, but only dished out one charge – likely a strategy from police to garner a conviction considering the time table for the crimes.

‘From the DNA that we were able to pull from our evidence, with 100 percent certainty Robert Koehler’s DNA matches the DNA from every one of our victims,’ Floyd said, after hearing from three women whose cases have since been confirmed to be the work of Koehler. 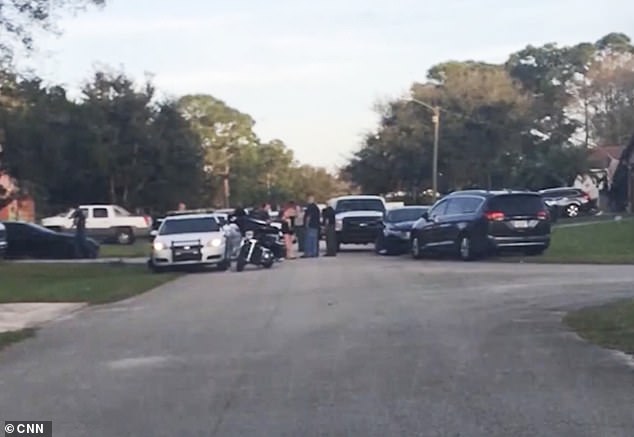 Following Koehler’s arrest two years, detectives discovered what they called a ‘dungeon in progress’ in his Palm Bay home, excavated in the basement. Cops are pictured crowding around the residence during the January 2020 arrest 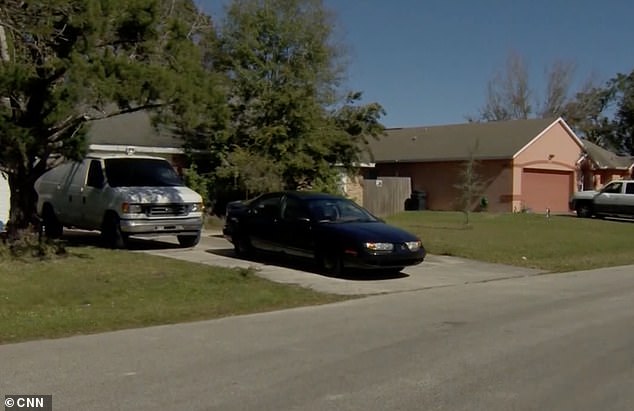 The Palm Bay residence cops said Koehler had excavated to build a ‘dungeon.’ Inside the residence, cops found trinkets and jewelry likeley taken from Koehler’s victims – which police said Tuesday likely could be nearly 50

‘Every single one of these women, I can’t imagine what they went through in the initial instance. But having to relive it this many years later, I’m amazed at their ability to recall, their ability to speak freely about it and so detailed.’

Following Koehler’s arrest two years, detectives discovered what they called a ‘dungeon in progress’ in his Palm Bay home, excavated in the basement.

Safes containing jewelry and trinkets authorities believe were souvenirs from his victims were uncovered from the subterranean lair, as well as a metal nail file wrapped in protective covering that police said could have been used as a weapon in many of the Pillowcase Rapist cases.

‘It was a hunch,” Floyd said of linking the first case she found to Koehler.

‘It was a hunch based specifically on this case, that he used a pillowcase to cover his face, and at no point was she able to identify who he was because she didn’t know what he looked like.’

Koehler’s trial for the charges stemming from the Miami-Dade incident is scheduled for June 21 – though police say the date could get pushed back. Cops said Tuesday that he will stand trial in Broward County for the remaining six charges when that case concludes.

A third victim, whose face was blurred by the court, told courtgoers Tuesday, ‘It gives me closure, a little piece of mind, knowing that he finally got caught.’ 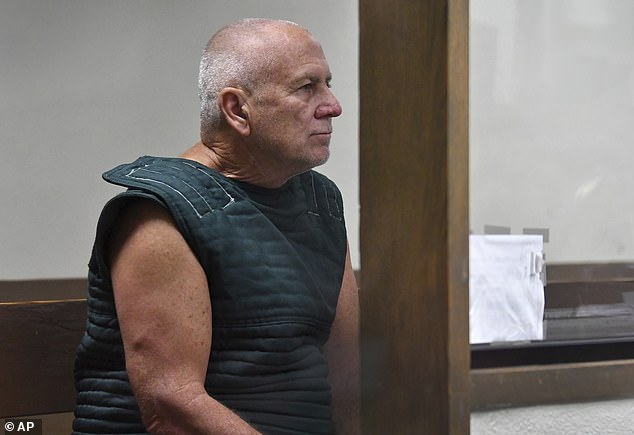 Koehler, pictured here in court in January 2020 had already been in the custody prior to the presser Tuesday, cops said, after being arrested in 2020 for a rape of a woman in Northwest Miami-Dade in 1983. He has since been linked to several other attacks in the state