Contents hide
I. BREAKING: One person is dead in massive pile-up on Arkansas highway involving eight semis and three passenger cars
I.I. Share or comment on this article:

By Alex Oliveira For Dailymail.Com

At least one person has died in a fiery accident involving eight semis and three passenger cars on Interstate-30 in Arkansas.

Arkansas Department of Transportation says there are multiple drivers injured, but have not specified how many or the extent of their injuries.

The eastbound lanes of I-30 remain closed and backed up for miles approaching the carnage. Traffic is moving on slowly in the westbound lanes, and traffic is being diverted.

Arkansas DOT is distributing food and water to drivers stranded on the interstate, and authorities are turning traffic around to clear the scene. 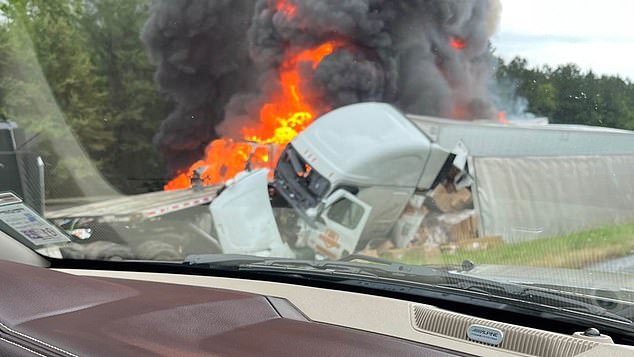 A photo from the scene of the fiery pileup on I-30 in Arkansas. Eight semis are reportedly involved, and three passenger cars

The accident occurred on Wednesday afternoon on a stretch of highway in Hot Springs County, near Malvern.

It remains unclear what caused the accident.

A representative for Arkansas DOT said it would be a long time before the highway traffic clears.

Photos from the scene show shredded semis piled on top of each other and scattered across the highway, while a ball of fire consumes them and spreads across the median.

A column of smoke could be seen rising up from the pyre. It was visible for miles, towering over the traffic backed up down the highway.

This is a developing story, check back for updates. 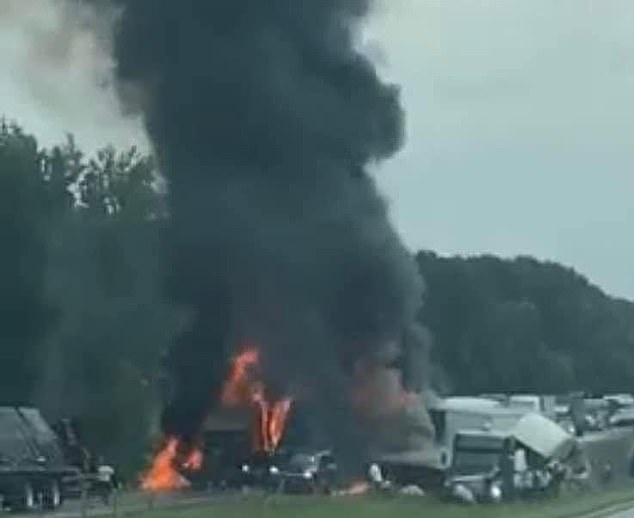 A column of smoke rising from the burning wreckage of the accident. Arkansas DOT said there were injuries, but did not specify how man or their nature