A bull shark swims only meters away from oblivious snorkelers and a paddleboarder in Jupiter, Florida.

Beachgoers were unaware of the stalking predator swimming in the shallows right beside them.

Bull sharks are known for visiting shallow waters but rarely come so close to the beach.

They are easily provoked and territorial by nature, with the National Wildlife Federation calling them ‘the most dangerous sharks to humans’.

Drone pilot Paul Dabill caught the nerve-wracking moment the shark swims by the swimmers on camera.

Dabill, 47, said the shark was probably looking for food in shallower waters near the beach

He said shark attacks only happen in two scenarios.

‘One is if the shark is in shallow murky water chasing baitfish and a person is swimming or surfing in the area,’ he said. ‘Then there is a chance that the shark could mistakenly bite the person while chasing the baitfish.’

Shark attacks are extremely rare, with only 69 incidents of bull shark attacks recorded in the US. 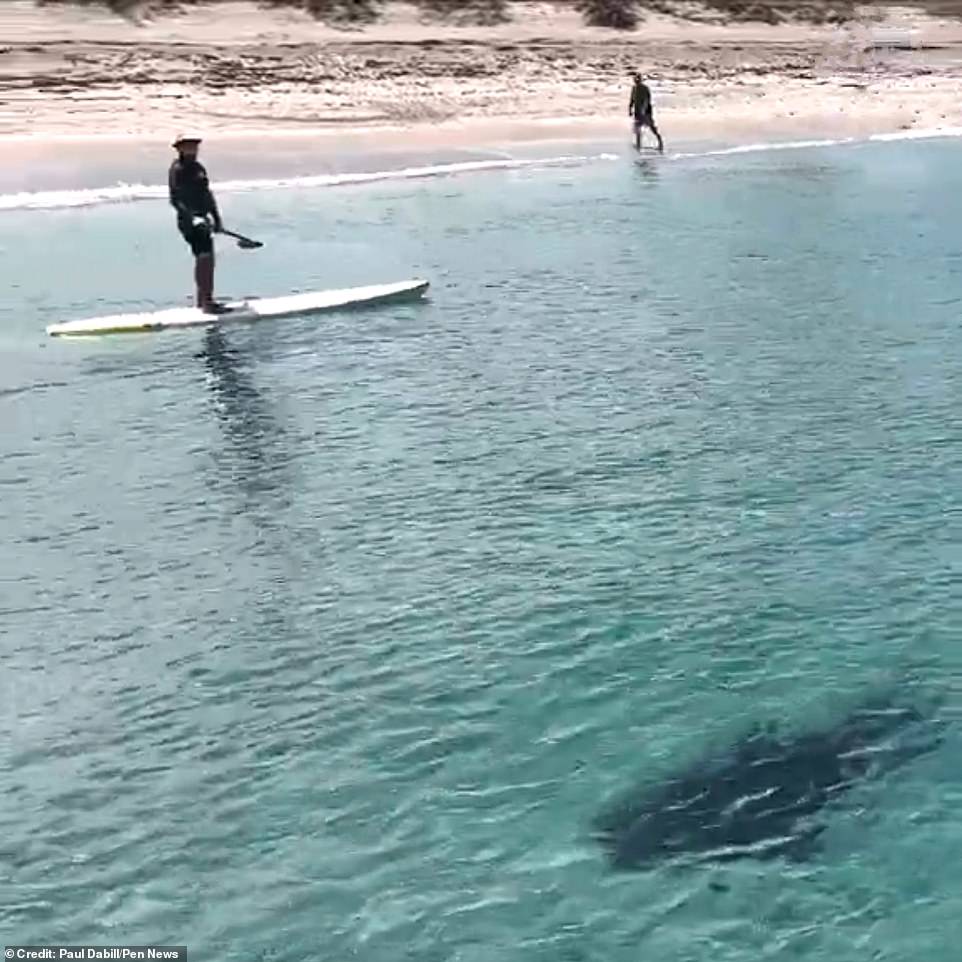 A bull shark is shown approaching a paddle boarder who seems oblivious to its presence. Bull sharks are known for visiting shallow waters but rarely come so close to the beach 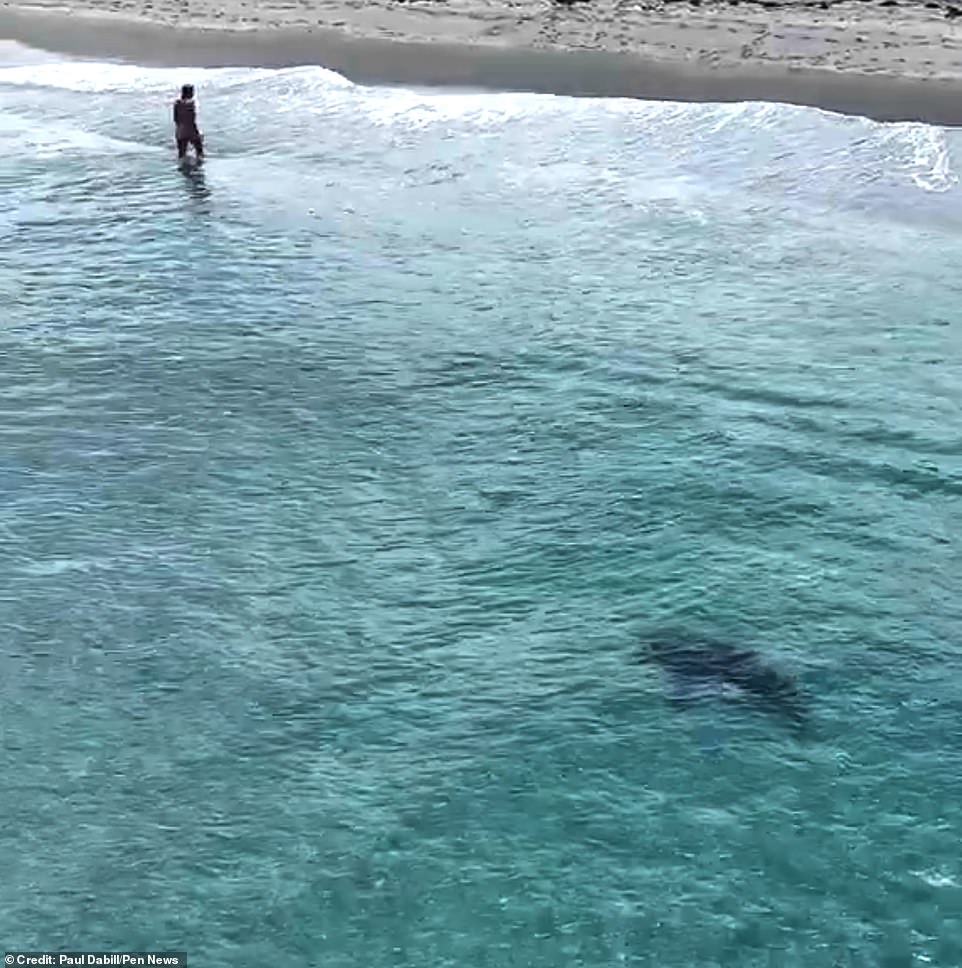 The shark swam past beachgoers who seemed unaware of the stalking predator in Florida. They are easily provoked and territorial by nature, with the National Wildlife Federation calling them ‘the most dangerous sharks to humans’ 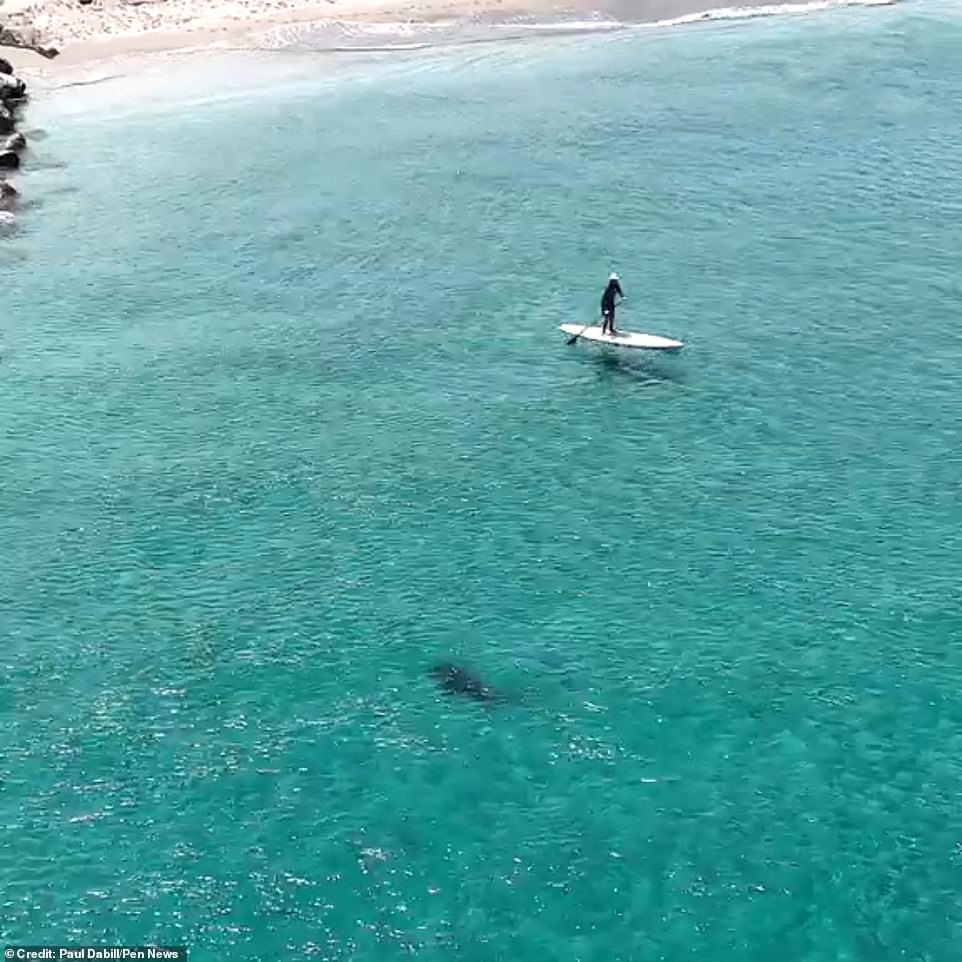 He was flying his drone when he noticed the shark closing in on a paddleboarder at his local beach.

HOW DANGEROUS ARE BULL SHARKS?

In the United States bull sharks are often found off the East Coast.

Bull sharks can survive in freshwater for long periods of time, unlike toehr sharks.

They have even been found in the Mississippi and Amazon Rivers.

Bull sharks prefer shallow coastal water, which means they can often come into contact with humans.

Despite recorded attacks being rare, they are often considered to be the most dangerous sharks to humans because of their aggressive tendencies and ability to migrate up rivers.

He said: ‘They’re common. During certain times I see them every time I fly my drone.

‘But they usually don’t get closer than 50 feet or so from the beach – this one got much closer, which is rare.’

In the footage, the shark approaches the beach before swimming right past the  paddleboarder.

It then comes closer to the shore just as a woman leaves the water, unaware of the stalking shark behind.

The shark heads towards a group of snorkelers before heading back to the paddleboarder again.

The other scenario is when a diver is spearfishing, he added.

‘Once a fish is shot it will struggle and bleed causing sharks to charge into the area and attempt to eat the speared fish.

‘If the spearfisherman is close to the speared fish the shark might accidentally bite the person.’

He added: ‘Sharks do not want to attack people.

‘If a shark bite occurs it is almost always a mistake by the shark or a person being in the way of the shark and a potential meal for the shark.’

A bull shark attacked a Florida woman who was working as a lifeguard in October 1993.

She told the Miami Herald: ‘I started to swim laps parallel to the beach when something slammed into me.

‘It felt like a truck plowing into me. At first, it disorientated me, and when I looked up to see what had happened, I realized I was spun in the opposite direction.

‘That’s when I knew a shark had attacked me. My hand and leg started to burn, so I pulled them out of the water to see the damage. My hand was dripping blood everywhere.’ 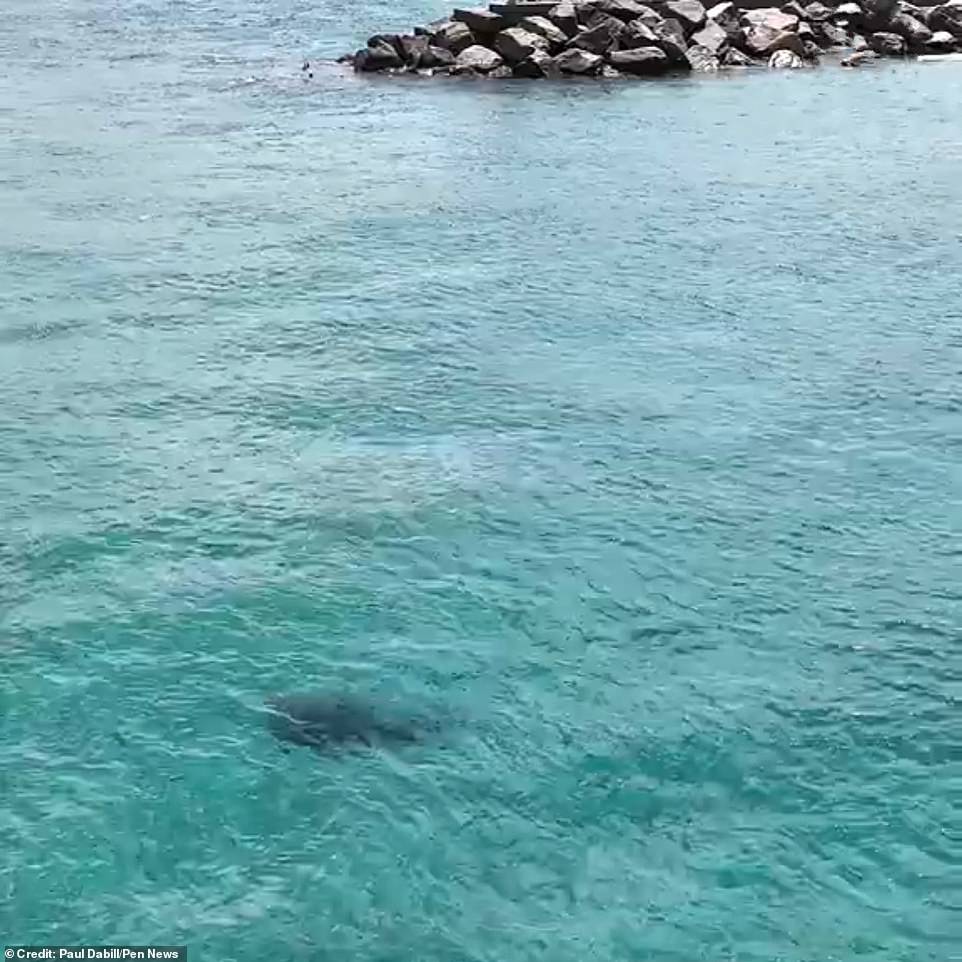 Snorkelers are pictured by the rocks in Jupiter, Florida as the bull shark patrols the waters. Sharks often hang around with pods of dolphins, with both species looking for fish to eat in the early evening hours

Also Read  Cup of sugar? No, now the neighbours want a free FRIDGE! 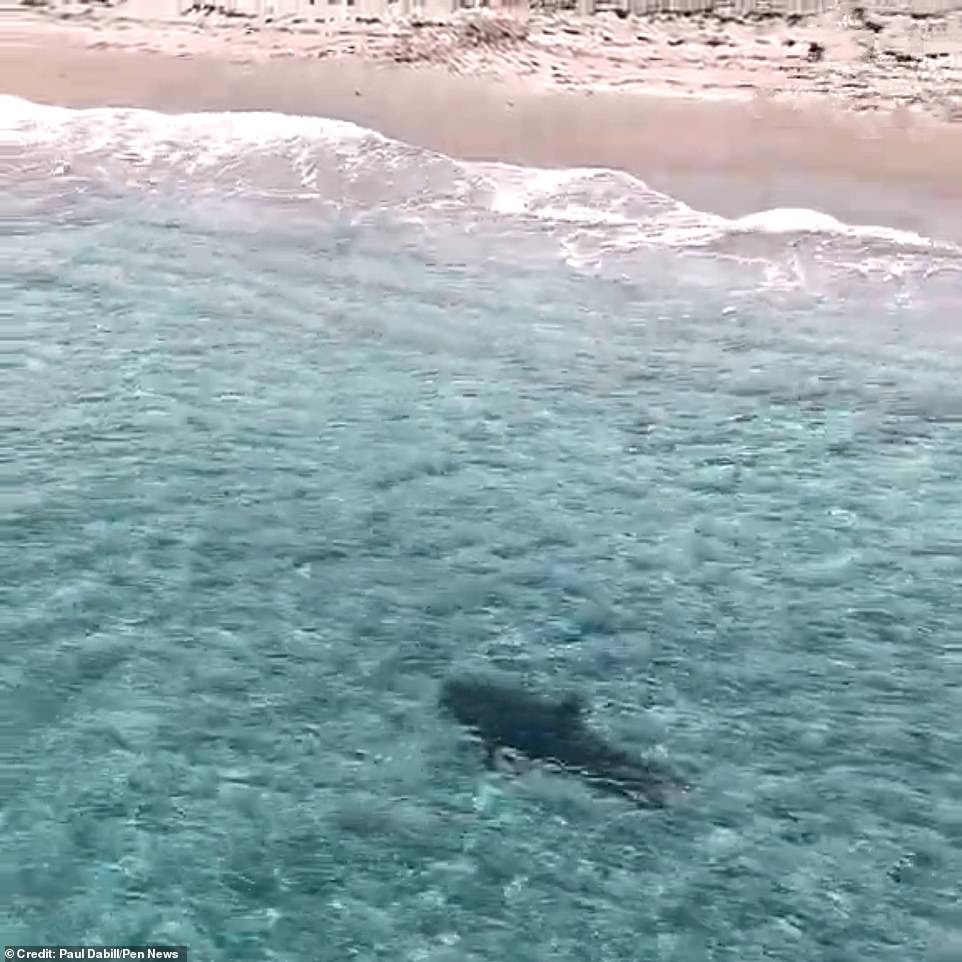 Drone pilot Paul Dabill said it was likely looking for food. Despite their territorial tendencies, there have only been 69 recorded unprovoked attacks, 17 of them fatal

Thadeus Kubinski was attacked and killed by a bull shark in August 2000 after he jumped off the dock and landed near a 2.5-meter shark in St. Petersburg, Florida.

Kubinski, 69, bled to death from the shark bites, which crushed his rib cage and tore his liver, the Pinellas County medical examiner ruled.

Sharks often hang around with pods of dolphins, with both species looking for fish to eat in the early evening hours, according to the St. Peterburg Times.

Another man, 43-year-old Michael Knowles, was bitten when he swam close to dolphins in Florida in 1999 near the Middle Keys, reported the Miami Herald. 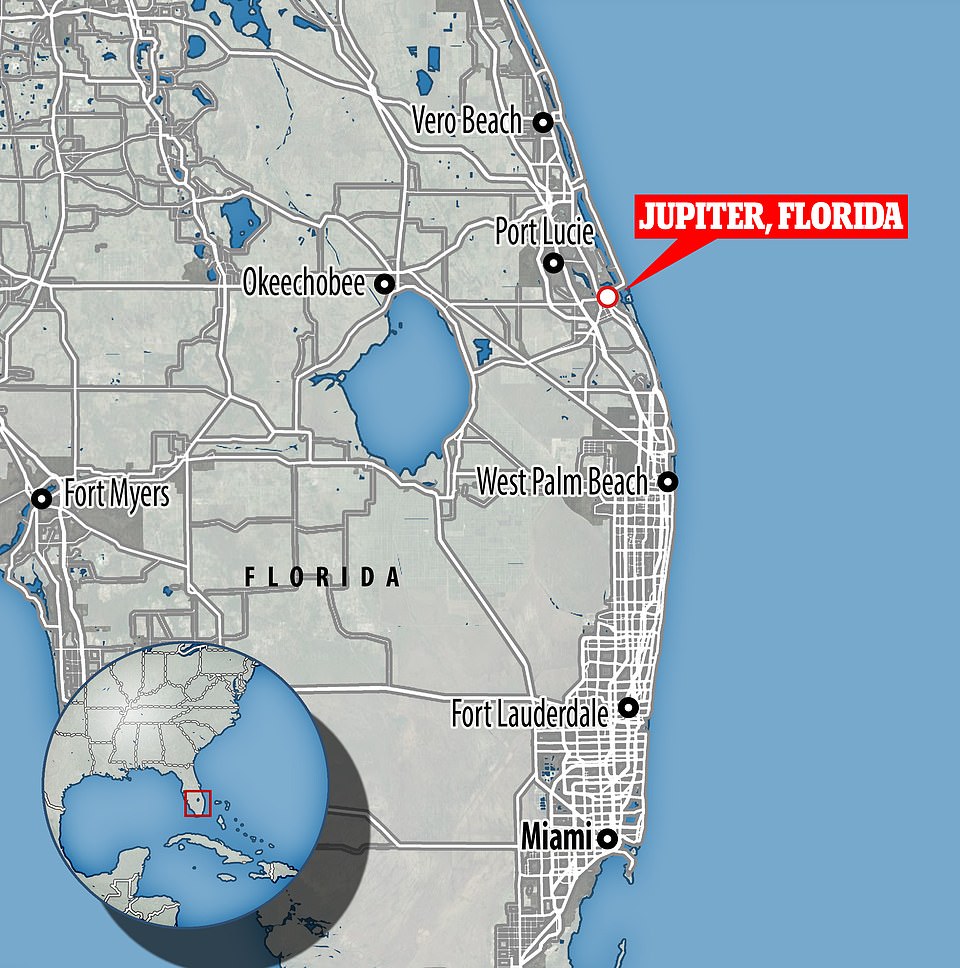