A millionaire cycling tycoon and his partner are suing their neighbours for £250,000 over Japanese knotweed which they say has infested the foundations of their £1.6m house.

Christopher Clarke, boss of a bike tours business and director of a cycling charity, claims the knotweed has infested a patch of ground beside his detached home in affluent Kensal Green, north west London.

He says the notorious invasive plant ran wild on his neighbours’ land and was now ‘leaning over’ his fence so thickly that he couldn’t open his back door properly. It even billowed into his house when he opened the door, he added.

Mr Clarke and his partner Louise Kaye say knotweed roots, known as rhizomes, have tunnelled from land next door owned by couple Talha and Minha Abbasi and into the footings of their Victorian house, which they bought in December 2014 for £1,159,999.

They are now suing Mr and Mrs Abbasi, demanding up to £250,000 in compensation and claiming their failure to deal properly with the knotweed on their land has devalued their house, which would otherwise now be worth £1.67m.

But financial consultant Mrs Abbasi and her husband deny any blame for the knotweed issues next door and say that any problem must have already been there when they bought the strip of land in 2016 for £166,000. 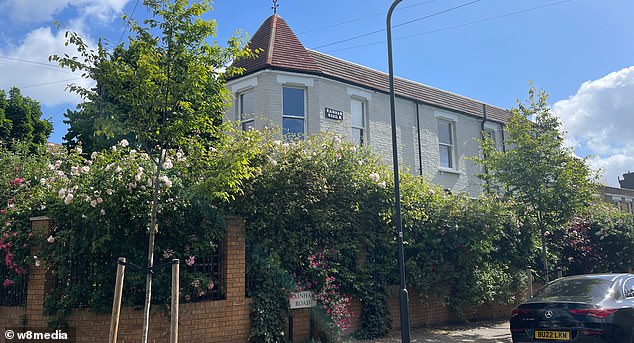 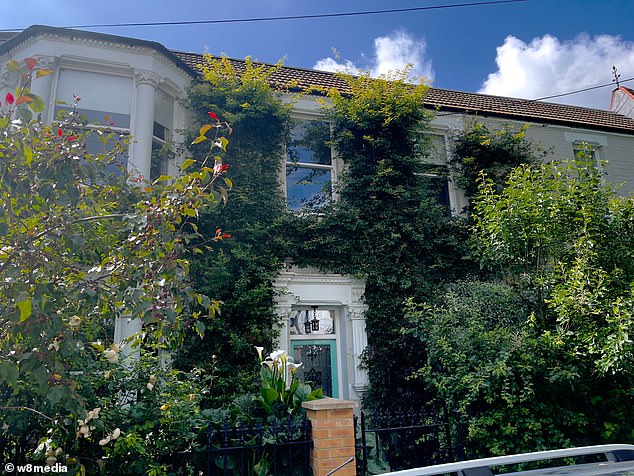 Mr Clarke and his partner Louise Kaye say knotweed roots, known as rhizomes, have tunnelled from land next door owned by couple Talha and Minha Abbasi and into the footings of their Victorian house

Christopher Clarke and partner Louise Kaye outside Central London County Court. They are suing their neighbours over the knotweed 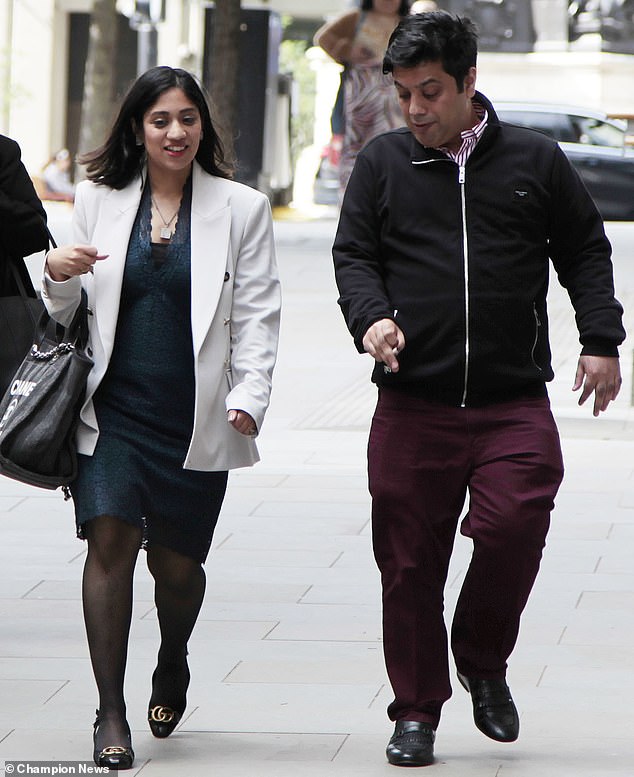 Talha and Minha Abbasi deny any blame for the knotweed issues next door and say that any problem must have already been there when they bought the strip of land in 2016 for £166,000 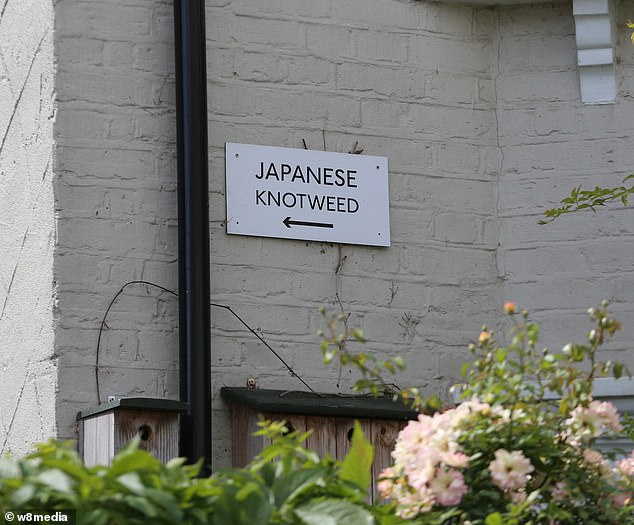 A sign on Mr Clarke’s home warning about the knotweed. He and his wife are demanding £250,000 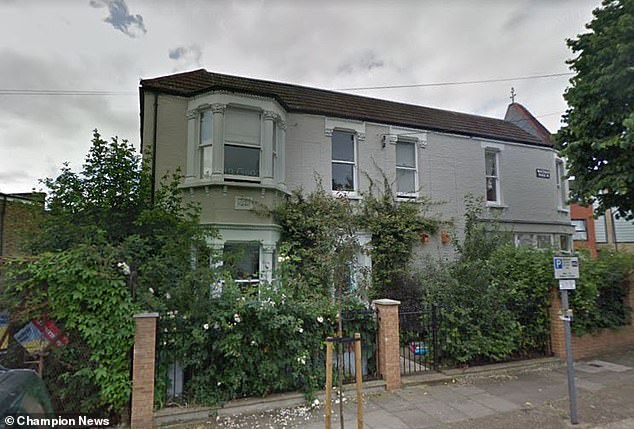 WHAT IS JAPANESE KNOTWEED? THE NOTORIOUS PLANT THAT CAN DESTROY BUILDINGS

Japanese Knotweed is a species of plant that has bamboo-like stems and small white flowers.

Native to Japan, the plant is considered an invasive species.

The plant, scientific name Fallopia japonica, was brought to Britain by the Victorians as an ornamental garden plant and to line railway tracks to stabilise the soil.

It has no natural enemies in the UK, whereas in Asia it is controlled by fungus and insects.

In the US it is scheduled as an invasive weed in 12 states, and can be found in a further 29.

It is incredibly durable and fast-growing, and can seriously damage buildings and construction sites if left unchecked.

The notorious plant strangles other plants and can kill entire gardens.

Capable of growing eight inches in one day it deprives other plants of their key nutrients and water.

Japanese knotweed can cause severe damage to buildings and infrastructure if left unchecked and can blight properties and make it hard to secure a mortgage or sell a home.

It can be extremely difficult to get rid of once it is established, with cuttings being treated as licensed hazardous waste due to its ability to spring up and start a new infestation from the smallest part of the cut plant.

Judge Alan Johns at Central London County Court heard barrister Andy Creer, for Mr Clarke and his partner, explain that they are suing the other couple claiming ‘damages for nuisance for the encroachment of Japanese knotweed on to the claimants’ land from the defendants’ neighbouring land’.

Mr Clarke, who helps run cycling charity Club Peloton and bike business Cycle-to Events, said his house had been devalued by up to 15% because of the infestation, which he and his partner accuse the couple next door of failing to deal with properly.

They have been ‘unable to obtain mortgage finance on the property because of the knotweed on the adjoining land because it was not subject to a knotweed management plan,’ their barrister said, claiming that ‘rhizomes growing on the defendants’ land are now under (Mr Clarke and his partner’s) property and in its foundation’.

Mr Clarke and Ms Kaye had a knotweed infestation on their own land when they moved in, which they say they had not been aware of, but which they subsequently had professionally eradicated in 2015.

But the barrister told the judge that a knotweed expert two years later in 2017 had reported that ‘the knotweed on the adjoining land poses an imminent threat of damage to the claimants’ home’.

The Abbasis have taken steps to dig out some of the knotweed, but Mr Clarke and Ms Kaye insist that the soil on their neighbours’ land needs to be dug out to a depth of three metres to remove all traces of the invasive weed, with the houses being propped up while the work is done. 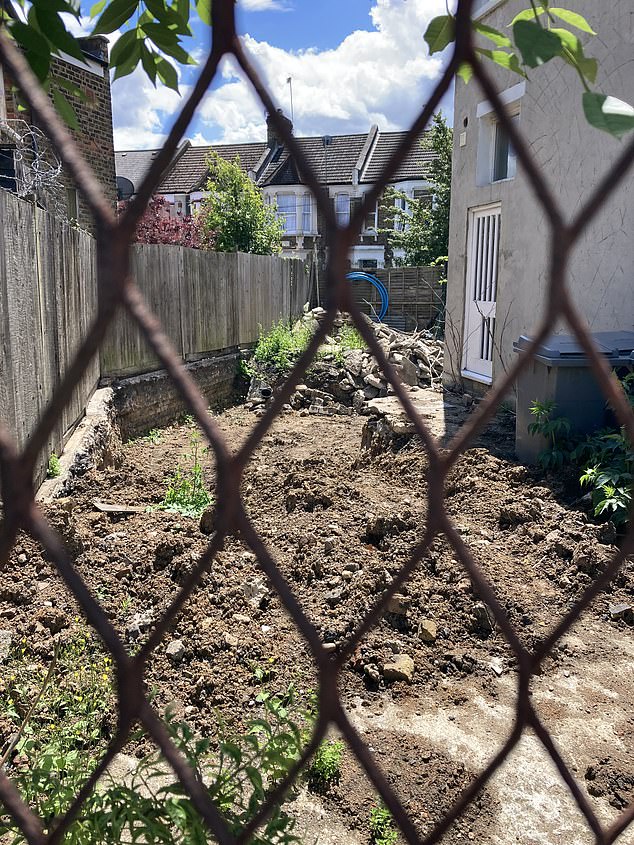 Pictured, The excavation of Japanese knotweed beside Christopher Clarke and Louise Kaye’s home. Japanese knotweed can cause severe damage to buildings and infrastructure if left unchecked and can blight properties and make it hard to secure a mortgage or sell a home

Also Read  Gynaecologist, 42, who accused the NHS of 'lethal' failings over conditions was caught moonlighting

Instead of getting in experts, they had initially ’employed general contractors to cut down the knotweed stems, which neither controls nor eradicates the knotweed’.

As well as damages, Ms Clarke and Ms Kaye are asking for an injunction to ‘compel treatment of the knotweed on the defendants’ land, alternatively to prevent further encroachment onto the claimants’ land.’

The barrister told the judge that Mrs and Mrs Abbasi ‘admit…that they knew of the knotweed’ before they bought their land and were written to by their neighbours’ lawyers in July 2016 ‘informing them that the knotweed needed to be dealt with urgently’.

‘Despite various assurances in emails…between September 2016 and June 2017 the defendants took no steps to treat the knotweed and it continued to present a threat of encroachment and damage to the property,’ she said.

But Tom Carter, for Mr and Mrs Abbasi, told the judge that the evidence given to the court by knotweed experts showed that it had encroached from the Abassis’ land in 2012 or earlier.

‘This means that it encroached before the defendants purchased the land,’ he said.

‘The defendants contend that they cannot be responsible for any losses which the claimants may prove, because those losses were incurred before any duty or breach by the defendants.’

In the witness box, Mr Clarke told the judge that as well as growing into the foundations of his house, tall stems of knotweed which shot up on the neighbouring land had been ‘encroaching by leaning over’ against his back wall and back door.

‘It comes through the door when you open the door,’ he told the judge.

The judge is expected to give a ruling on the case at a later date.