DonateSubscribe
Home News Update International News Man, 77, furious at being £4,500 out of pocket after being prosecuted for closely passing cyclist
Comment


A businessman is furious at being left £4,500 out of pocket after he was prosecuted for passing a cyclist too closely when the rider recorded the incident on a GoPro camera and sent it to police.

Wayne Humphreys, 77, was captured overtaking a cyclist via GoPro camera on a country road while driving his white Audi Q8 in Wales last year.

The cyclist, who has not been named, reported the footage to roads policing team GoSafe, a road casualty reduction partnership between councils and police.

Their Operation Snap web portal enables the public to upload video evidence which police will review to see if any offences have been committed.

The warehouse boss was contacted over the manoeuvre but refused to accept any wrongdoing and did not attend a course or pay a fixed penalty notice.

He was prosecuted at Cardiff Magistrates Court for driving without due care and attention, given four penalty points, and ordered to pay a fine of £1,887 on top of court and solicitor costs.

Drivers are increasingly being targeted by cyclists who record their journeys via GoPro cameras and film unsuspecting motorists.

The number of Operation Snap reports are expected to dramatically rise under the new rules of the Highway Code, which continues to boost protection for riders. 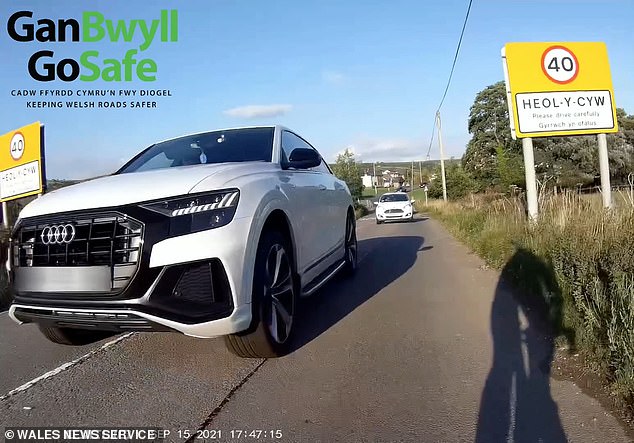 Wayne Humphreys, 77, was captured overtaking a cyclist via GoPro camera on a country road while driving his white Audi Q8 (pictured) in Wales last year 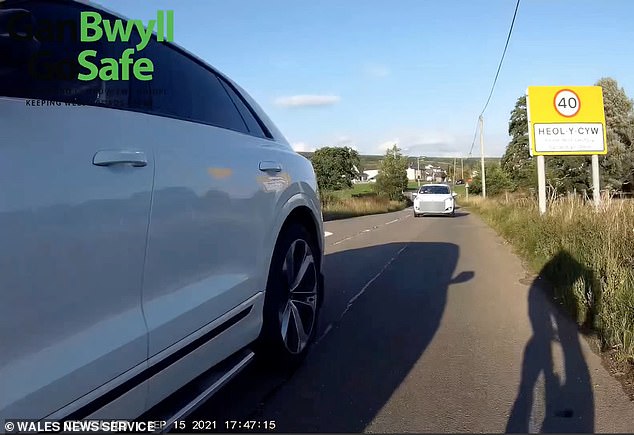 The cyclist reported the incident to roads policing team GoSafe, which is a road casualty reduction partnership that encourages motorists to drive legally and safely

Contents hide
I. WHAT THE NEW HIGHWAY CODE RULES SAY
II. What is Operation Snap and how can YOU be caught by a cyclist?

– Cyclists should ride in the centre of their lane on quiet roads, in slower-moving traffic and at the approach to junctions or road narrowings

– Groups of cyclists can ride 2 abreast

– Cyclists should be aware of people driving behind them and allow them to overtake (for example, by moving into single file or stopping)

– When people are crossing or waiting to cross at a junction, other traffic should give way

– if people have started crossing and traffic wants to turn into the road, the people crossing have priority and the traffic should give way

– People driving, riding a motorcycle or cycling must give way to people on a zebra crossing and people walking and cycling on a parallel crossing

‘Other than that I have never had a fine and I have had a licence for 60 years.’

Humphreys said he and his son measured the road in question in Bridgend, South Wales, and estimated the gap he left for the cyclist was sufficient and safe.

He said: ‘Taking into account the cyclist and his bike there would have still been at least four foot space.

‘I find it absolutely incredible this has happened. I don’t know whether to appeal it or not. It will probably just cost me more money.

Also Read  Johnny Depp Fist-Pumping, Getting Hailed All Over England

‘This has already cost me about £4,500 with the money for the court and the solicitor.

‘It doesn’t make sense to me.’

A GoSafe spokesman said: ‘GoSafe received footage of a white Audi overtaking a cyclist on Pant Hirwaun, Bridgend on Wednesday, 15th September 2021, without leaving enough space to perform the manoeuvre.

‘The driver, Wayne Humphreys, from Pontyclun, was contacted and offered a course. The What’s Driving Us course is offered to drivers/riders as an alternative to prosecution for the offence of driving without due care and attention.

‘Mr Humphreys failed to accept this course and later failed to comply with a fixed penalty notice. This resulted in him appearing in Cardiff Magistrates Court on 8th June 2022. He was found guilty of driving without due care and attention. He received 4 penalty points on his license, given a £1152 fine, £620 costs, and a £115 victim surcharge. 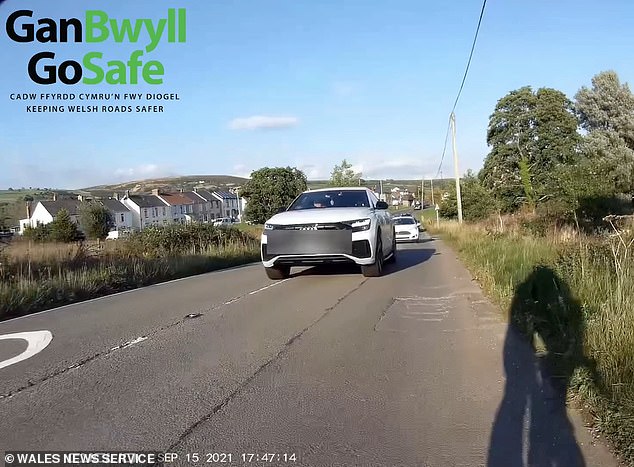 Humphreys was prosecuted at Cardiff Magistrates Court for driving without due care and attention, given four penalty points, and ordered to pay £1,887 in a fine alongside the court and solicitor costs

‘GoSafe regularly receives similar submissions through Op Snap and has worked closely with drivers and cycling groups to develop Operation Close Pass, which looks to educate both drivers and cyclists on how to stay safe on our roads. This includes promoting one of the fundamental things to remember when overtaking a cyclist, to reduce your speed and always leave 1.5 metres between your vehicle and a cyclist, whenever safe to do so.

‘Despite this, unfortunately, GoSafe continues to receive regular Op Snap submissions relating to close pass incidents. This outcome shows that these submissions are taken seriously and given the appropriate amount of attention, as we continue to work towards ensuring that our roads are safer for everyone.

‘If you have information on close pass incident or other possible road traffic offence, you can submit the details, along with supporting footage, to GoSafe using Operation Snap.’

What is Operation Snap and how can YOU be caught by a cyclist?

Operation Snap is a police response to the ever increasing submissions of video evidence from members of the public in relation to witnessed driving offences.

Several of Britain’s police forces are participating in the programme that allows cyclists, pedestrians and motorists to send in footage of a road offence being committed so the individual can be prosecuted.

Members of the public are encouraged to fill out an online statement and upload the dashcam evidence they have captured.

Submitted footage and reports are then examined by roads policing officers and can be used to take action against drivers found to be breaking the law.

Every submission is reviewed and assessed against evidential thresholds by the Operation Snap team.

You can report driving offences such as:

Your incident is not suitable to report online if it applies to the following: