Keir Starmer heaped pressure on the would-be Tory PMs today by unveiling a dramatic £29billion plan to freeze energy bills for six months – despite warnings he is pursuing fantasy economics.

The Labour leader hailed his ‘robust’ proposals as he surfaced after a holiday, insisting Britons cannot be left to take the burden of spiralling prices.

He is calling for the energy price cap to be kept at its current level of £1,971 rather than letting it rise to £3,500 as expected in the autumn, and even higher next year.

Labour said the £29billion policy is fully funded, would save every household around £1,000 and even cut inflation. It would be paid for by widening the scope of the windfall tax on oil and gas producers and backdating it from May to January.

But senior Tories have branded the idea unworkable as energy firms are facing higher wholesale prices and could go bust if they are not allowed to pass on costs.

The respected IFS think-tank also raised concerns that the policy would need to be in place for at least a year, and could end up costing as much as the huge furlough scheme during Covid – around £70billion. It cautioned that the downward effect on inflation would be an ‘illusion’ because the level would simply surge again when the government stepped back.

He told BBC Radio 5 Live: ‘Millions of people are already struggling with their bills, we all know that across the country and the hikes that are expected for this October….from a price cap of just under about £2,000 to £3,500 and then £4,200 and millions of people, millions of families are saying ‘I just can’t afford that’.

‘We have a choice and this is really the political choice of the day. We either allow oil and gas companies to go on making huge profits which is what’s happening at the moment or we do something about it.

‘We the Labour Party have said, we’ll do something about it. We will stop those price rises and we will extend the windfall tax on the profits that the oil and gas companies didn’t expect to make. So we’ve got a very strong, robust, costed plan here which will stop those rises this autumn.

‘It has an additional benefit which is really important, which is because energy prices are a real driver of inflation, this also makes sure that we can reduce inflation from what might even be 13 per cent down to about 9 per cent.’ 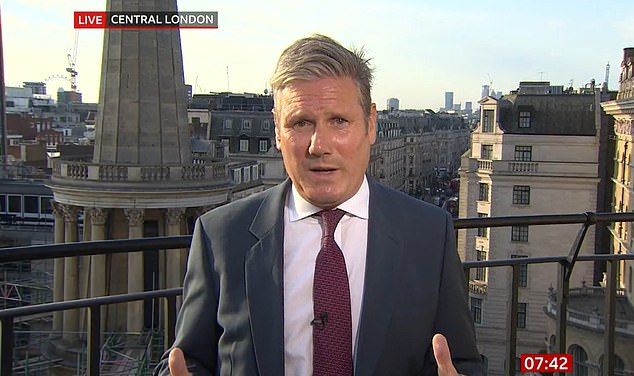 Keir Starmer hailed his ‘robust’ proposals as he surfaced after a holiday, insisting Britons cannot be left to take the burden of spiralling prices 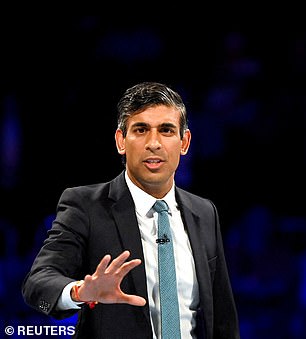 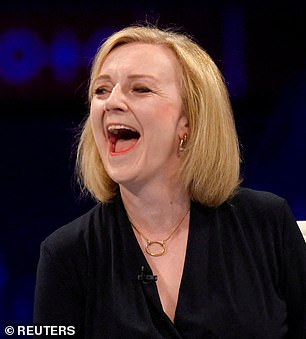 Sir Keir said one of the main benefits of the scheme was that it brings down inflation, reducing the bill for servicing government debt which is linked to price rises.

‘We’ve got to grip it because at the moment what we’ve got is two Tory leadership candidates who are fighting each other in a sort of internal battle, where their main argument seem to be about how awful their record in Government has been and a Prime Minister who’s a lame duck because he’s acknowledged there’s a problem with energy bills, but says ‘I’m not going to do anything about it’.’

However, IFS director Paul Johnson said that was an ‘illusion’ because inflation will go up more at the end of the policy.

He said Labour’s costing of £30billion for six months was likely to be unrealistic as the policy would need to stay in place for a year to keep bills in check.

‘You’re looking at the cost of furlough… that is a very expensive scheme. Of course what is does achieve is to protect everyone entirely,’ he told BBC  Radio 4’s Today programme.

Asked about the IFS reservations, Sir Keir said Mr Johnson was not disputing that the plan would reduce inflation.

‘Of course what he’s rightly saying is what happens after April matters because you have to maintain measures to reduce inflation,’ he said.

‘Of course we have to do that in April when we see the circumstances, but what he’s not suggesting is that we’re wrong when we say that our plan will reduce inflation.’

Sir Keir also fended off criticism from the Left of his own party that he has abandoned the commitment to nationalisation.

He told BBC Breakfast: ‘The choice we’ve made in our plan is that every single penny that is needed for this plan will go directly to reducing the bills of families up and down the country.

‘If you go down the nationalisation route, then money has to spent on compensating shareholders and I think in an emergency like this, a national emergency where people are struggling to pay their bills, I think that the right choice is for every single penny to go to reducing those bills.

‘Which is why we’ve gone for this across the board, freeze the prices, raise the money for that through the oil and gas companies who’ve made more profit than they were expecting and of course the additional benefit of our plan is that it reduces inflation by up to 4 per cent.’ 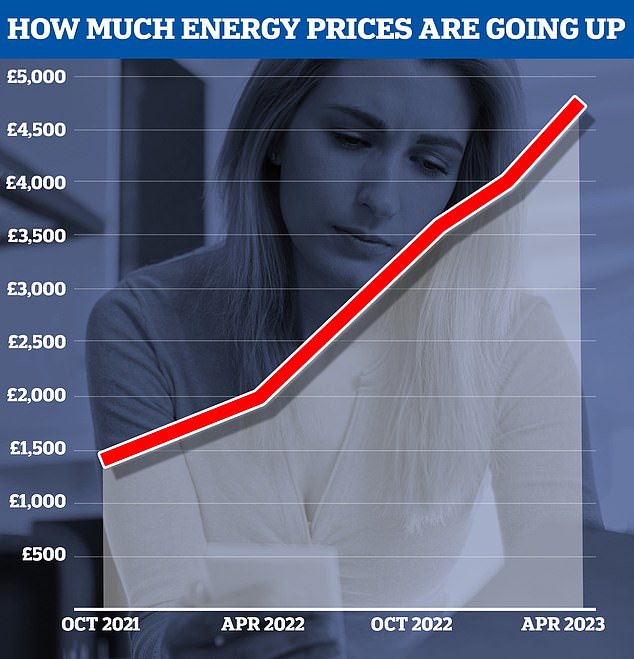 ‘We would have to find a way to compensate people [for] effectively trying to abolish that price rise, and that would inevitably lead to higher taxes.

‘So I think we have to be a little bit careful. Labour’s seemingly magical solution to just wish it all away – that will have consequences.’

Former minister Sir John Redwood, expected to be one of Liz Truss’s economics advisers if she becomes prime minister, said: ‘Banning price rises cannot work because companies need to be able to cover their costs.’

He said Labour’s plan risked following the model in Venezuela, where price controls on basic foods by the socialist government led to shortages and black markets.

He added: ‘If you want to see what happens, go to a pure socialist country. They discovered that if you try to keep the prices down there isn’t enough supply.’

Mr Redwood added on Twitter: ‘If Labour thinks government can keep prices down by simply passing a law why don’t they propose we do that for food, clothes and many other things as well as for energy?

‘Try this and end up with empty shelves. The Venezuela model leads to poverty.’

The announcement from Sir Keir, who has returned from holiday, is likely to put the Tory leadership contenders under pressure to come up with fresh measures themselves, with 70 charities urging them to double the £1,200 pledged to low-income families so far to avert a ‘catastrophe’.

Miss Truss is prioritising tax cuts and is opposed to a bigger windfall tax, while Rishi Sunak has promised more support.

Whoever enters No 10 next month could also implement a multibillion-pound package reportedly drawn up on the orders of Chancellor Nadhim Zahawi.

It would see energy bills cut by £400 through a technical change to the way the price cap works.

Climate change tsar Alok Sharma said: ‘To provide support with energy bills, particularly to help the most vulnerable, the new prime minister will need [to] deploy ‘bazooka’ measures – a peashooter approach won’t do.’

Last night Labour’s plan was supported by Luke Murphy of the Left-leaning think-tank the Institute for Public Policy Research.

He said: ‘These proposals would prevent soaring energy bills from pushing millions into debt and destitution, and hold down ever rising inflation…’

Labour said it would raise £14billion by scrapping the £400 rebate for households this winter and £8billion by closing a windfall tax loophole giving energy giants a discount if they invest in the UK, with the last £7billion needed coming from lower debt interest payments as inflation falls. 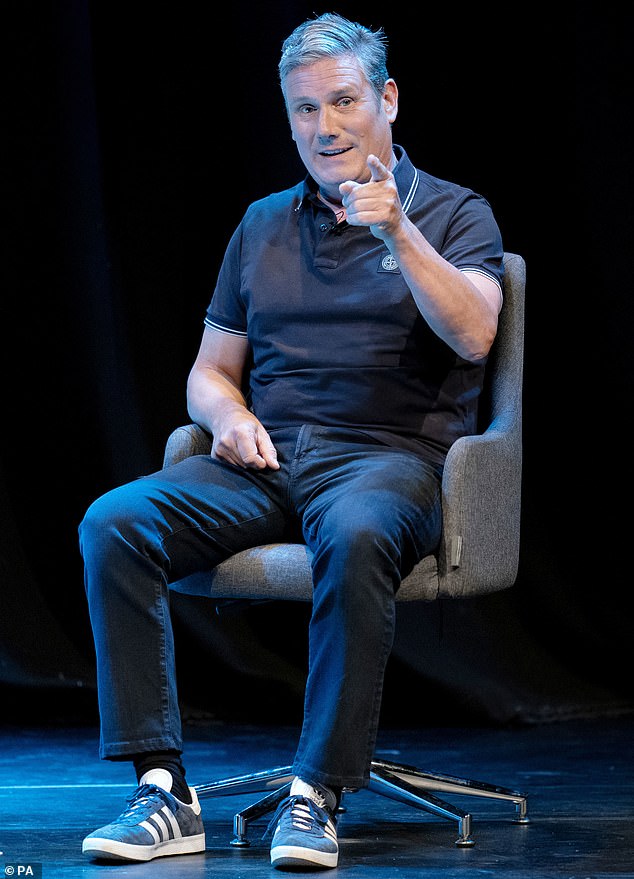