A hate crime awareness course that gave alleged offenders arrested for activities such as sharing a tweet the chance to avoid prosecution has been scrapped by a police chiefs.

Hampshire Constabulary was among three forces in the country that ran the two-hour educational sessions for people accused of racism, sexism, misogyny and transphobia.

The restorative justice scheme was funded out of the force’s Police and Crime Commissioner’s budget, but faced controversy when a 51-year-old army veteran was offered the course after retweeting a meme.

He was told by police he could avoid prosecution if he took part in the session before they had conducted any investigation. He was subsequently released with no further action.

Donna Jones, Tory PCC for Hampshire, revealed on Sunday that she is ending the contract with the company which manages the programme as campaigners hailed the move as a victory over ‘woke coppers’. 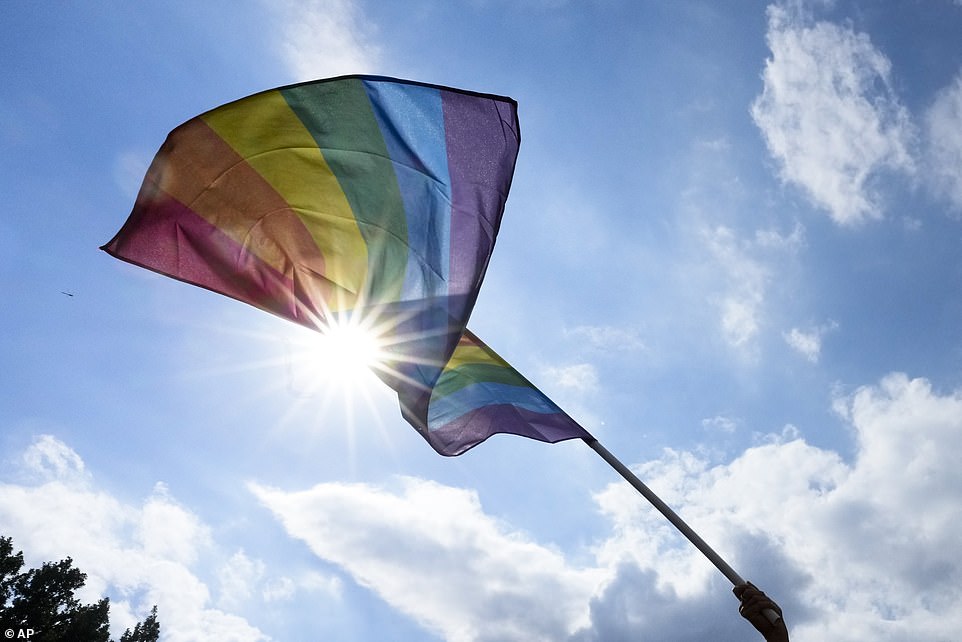 Hampshire Constabulary was among thee forces in the country that ran the two-hour educational sessions for people accused of racism, sexism, misogyny and transphobia 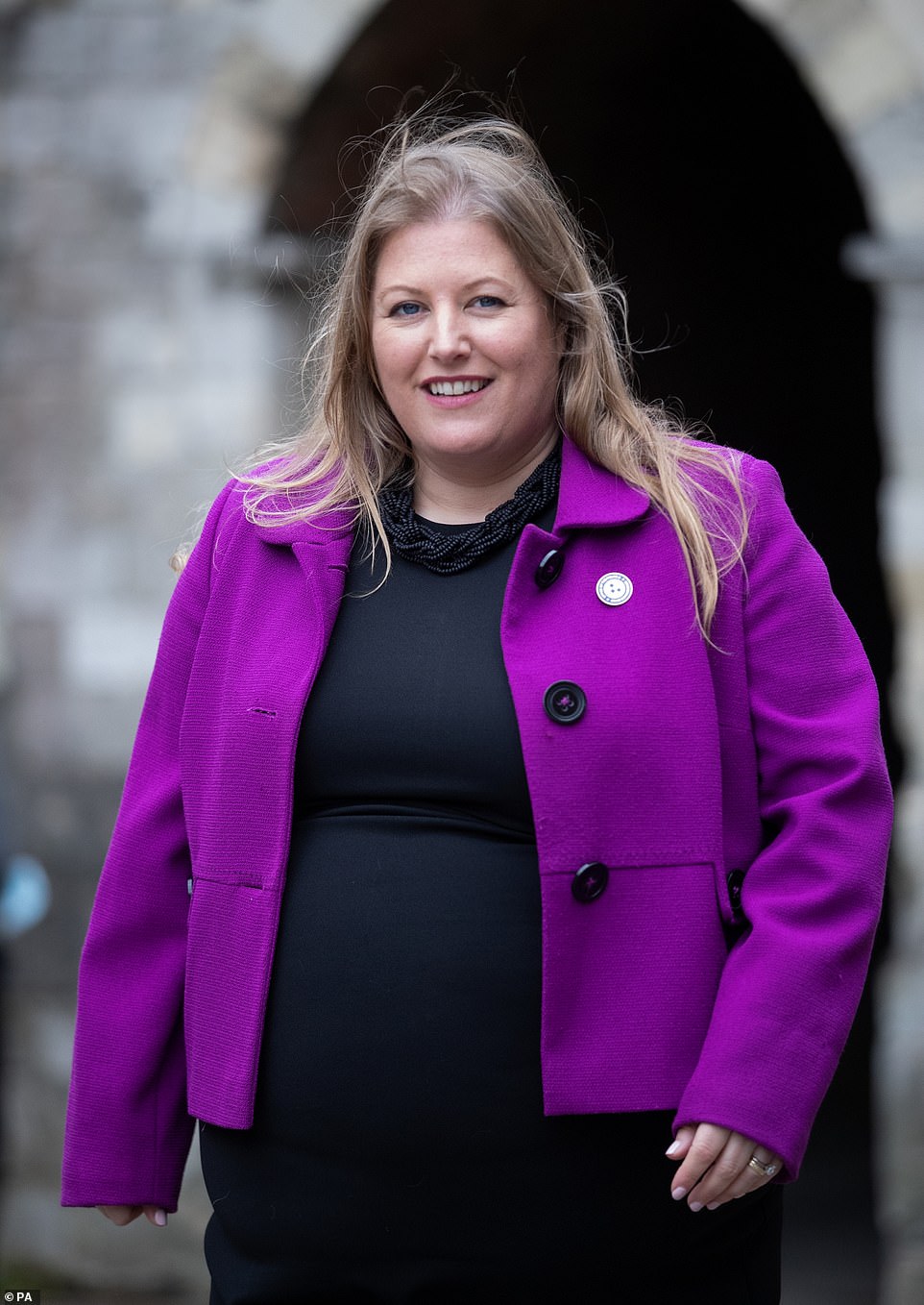 Donna Jones, PCC for Hampshire, revealed to media she is ending the contract with the company which manages the programme 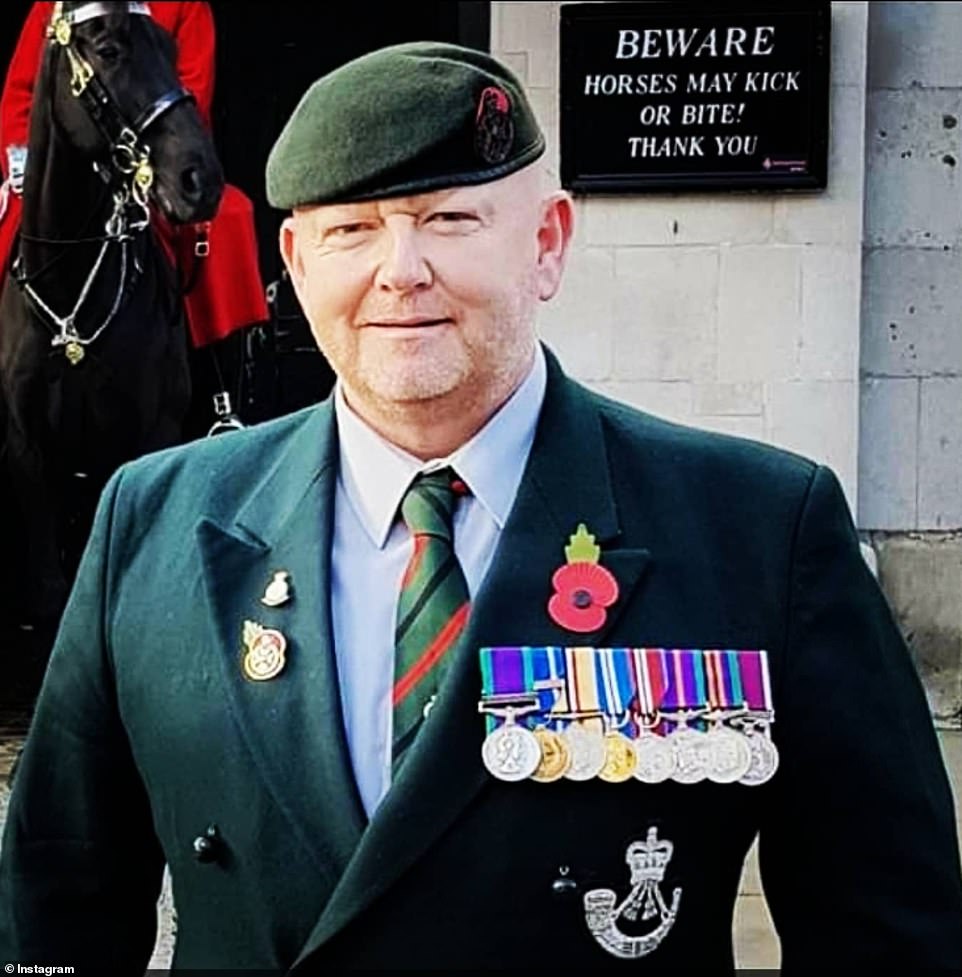 Darren Brady, 51, (pictured) slammed Hampshire Police for ‘impeding his right to free speech’ after he was placed into handcuffs on Saturday at his home in Aldershot for sharing a meme 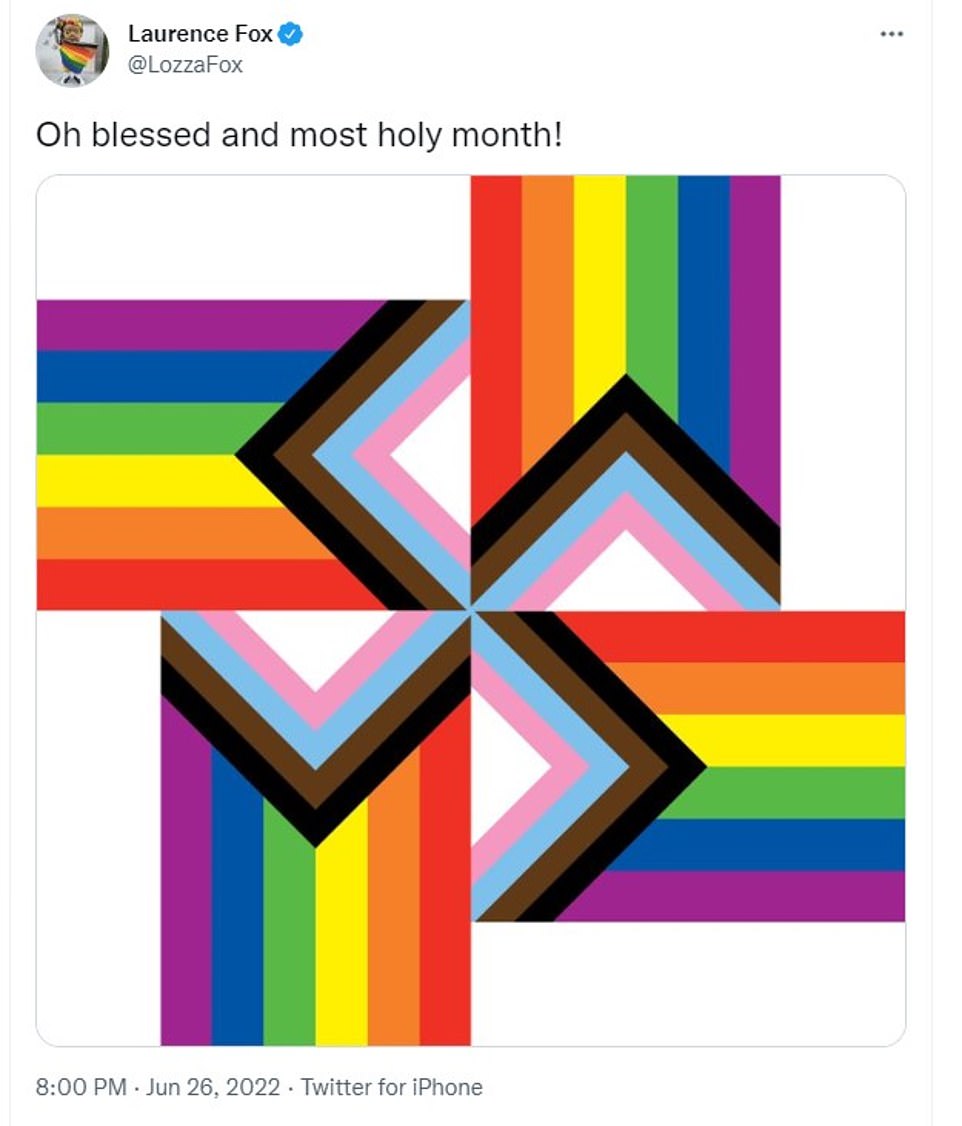 The tweet showed four LGBT pride flags positioned to make a swastika, captioned with the words, ‘Oh blessed and most holy month’

Full statement from crime commissioner criticising her own police force

PCC Donna Jones: ‘I am aware of the video published on Twitter which shows the arrest of two men in Hampshire yesterday, one for malicious communications and one for obstruction of a police officer.

‘I have taken this issue up with the Constabulary today and have been advised officers made the arrests following a complaint from a member of the public of an alleged hate crime.

‘It follows a post on social media of Progress Pride flags in the shape of a Swastika.

‘I am concerned about both the proportionality and necessity of the police’s response to this incident. When incidents on social media receive not one but two visits from police officers, but burglaries and non-domestic break-ins don’t always get a police response, something is wrong.

‘As Police Commissioner, I am committed to ensuring Hampshire Constabulary serves the public as the majority of people would expect. It appears on this occasion this has not happened.

‘This incident has highlighted a really topical issue which Hampshire Constabulary and other police forces need to learn from. In order to support this I will be writing to the College of Policing to make them aware of this incident and encourage greater clarification on the guidance in order to ensure that police forces can respond more appropriately in the future.’

She told The Telegraph: ‘I inherited a restorative justice contract when I was elected into office last year and the restorative hate-crime awareness course was part of that.

‘I have decided that this hate-crime awareness course will no longer be offered in Hampshire and the Isle of Wight by way of a community resolution option. The change needs to be planned properly but will take place in the coming weeks.

‘In saying this, I want to be clear that when someone has been targeted and suffered violence or abuse because of their protected characteristics, and the incident reaches the evidential threshold for a hate crime, perpetrators can expect police action. This is vital.’

The programme came under fire after an army veteran was arrested by police for ‘causing anxiety’ when he retweeted a picture of a swastika made out of Pride flags on social media.

Darren Brady, 51, slammed Hampshire Police for ‘impeding his right to free speech’ after he was placed into handcuffs on Friday at his home in Aldershot for sharing the meme.

Footage of the arrest was widely shared on social media and showed an officer who told Mr Brady he was being apprehended because his post had ’caused anxiety’ and been reported to authorities.

The image Mr Brady retweeted was of a swastika that had been digitally manipulated and was made out of four LGBT pride flags.

In the video, shot on a mobile phone, Mr Brady can be heard asking the three police officers: ‘Why am I in cuffs?’ One officer responds: ‘It didn’t have to come to this at all.’

Mr Brady replied: ‘Tell us why you escalated it to this level because I don’t understand.’ The officer adds: ‘Someone has been caused anxiety based on your social media post. That is why you have been arrested.’

Harry Miller, a former police officer, was also arrested after claiming he had tried to prevent the former serviceman from being detained.

He told MailOnline tonight: ‘We welcome the intervention of the PCC but the police should never have been acting as judge and jury in the first place.

‘The public don’t need re-educating by woke coppers who think it’s their job to be moral and political guardians.’

Commenting on the video circulating on Twitter, Mr Miller wrote: ‘I’d been locked up by this time and missed this exchange. I’m speechless.’

Mr Miller, who in December won a Court of Appeal challenge over police guidance on ‘hate incidents’, said police visited the man 10 days earlier and has informed him that he could take the option of attending an £80 education course to avoid being arrested and possibly charged with a criminal offence.

The veteran said he needed time to mull it over, before the officers agreed to return at a future date.

Writing on Twitter on Sunday, Mr Brady told his followers: ‘It’s nice to be able to enjoy a Sunday morning in peace without being harassed by Hampshire Police trying to extort money from me, or have me ‘re-educated’ for sharing a meme on the Internet.’ 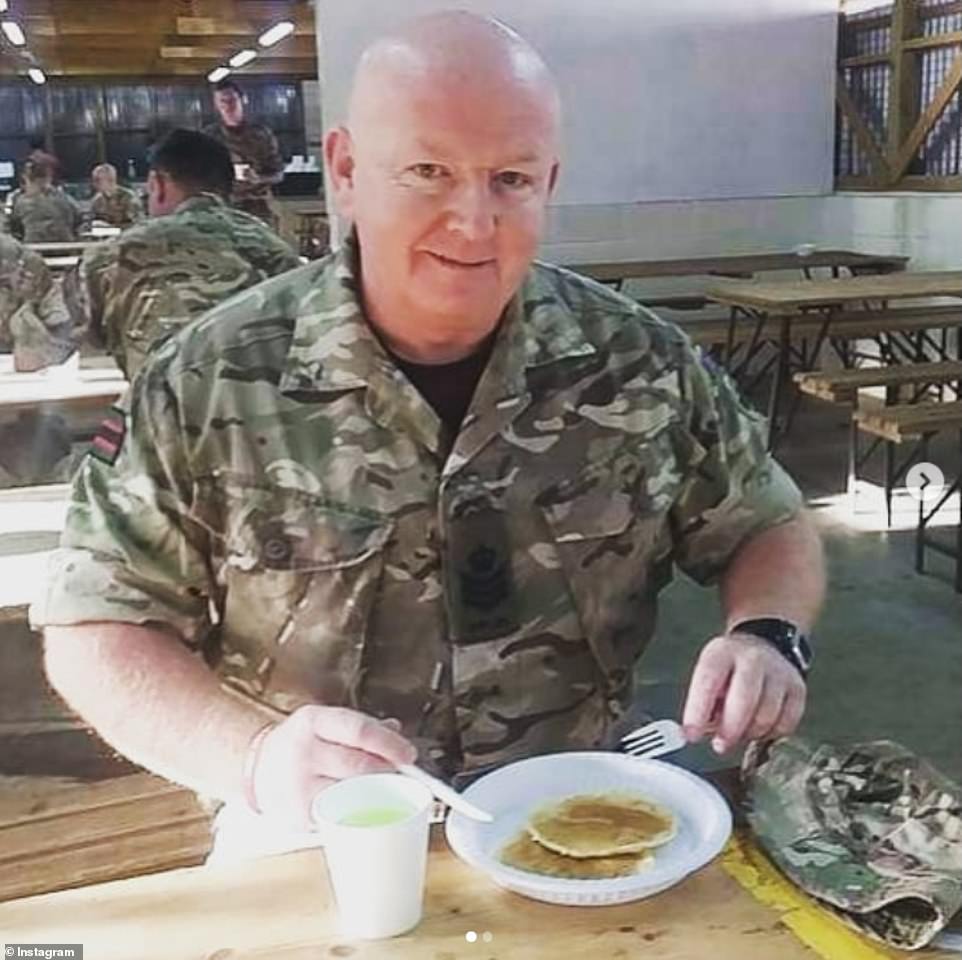 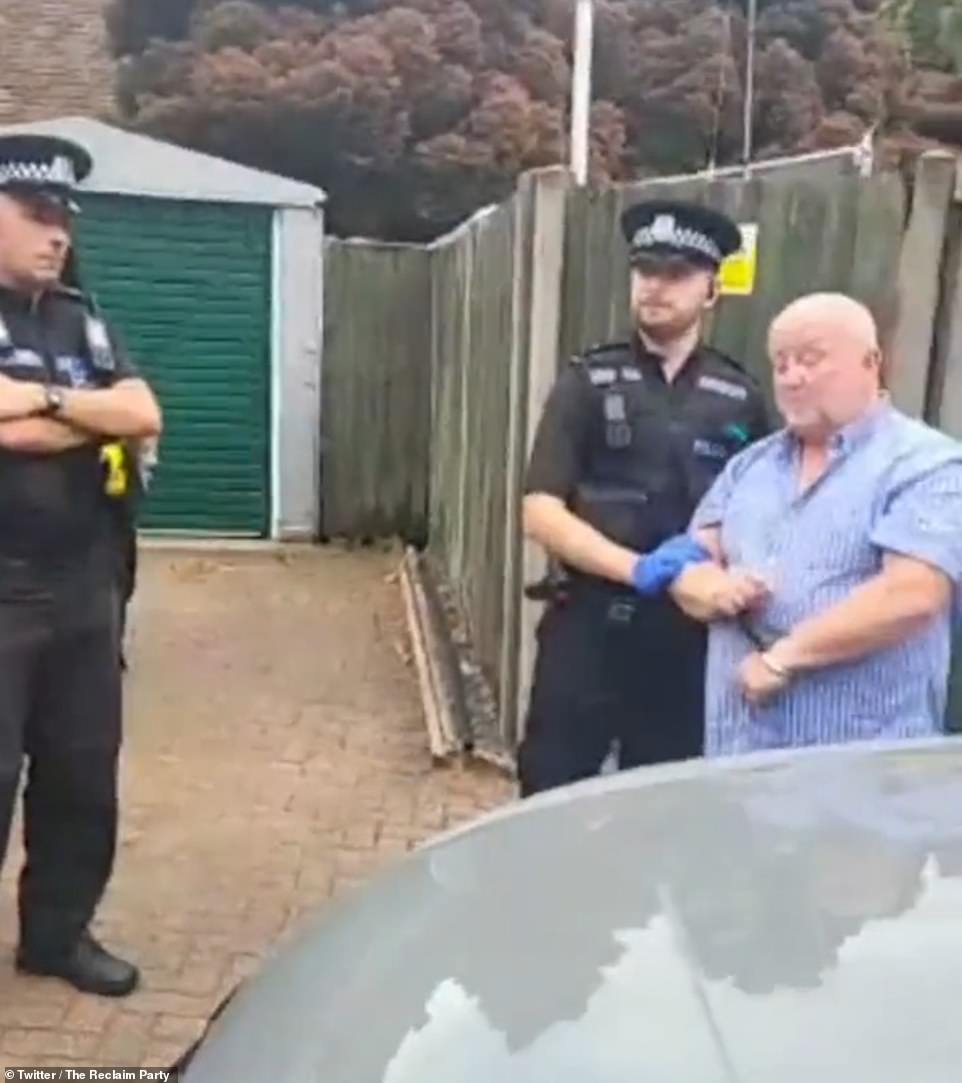 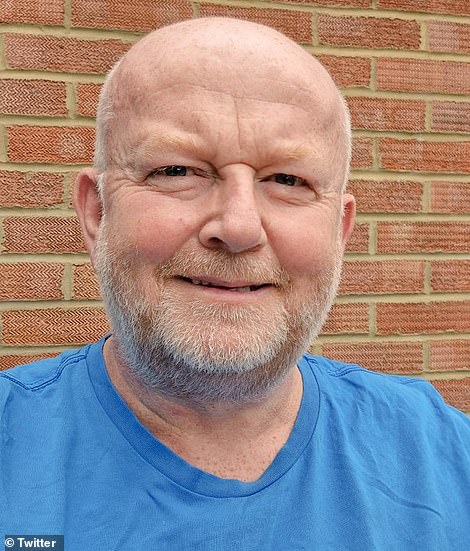 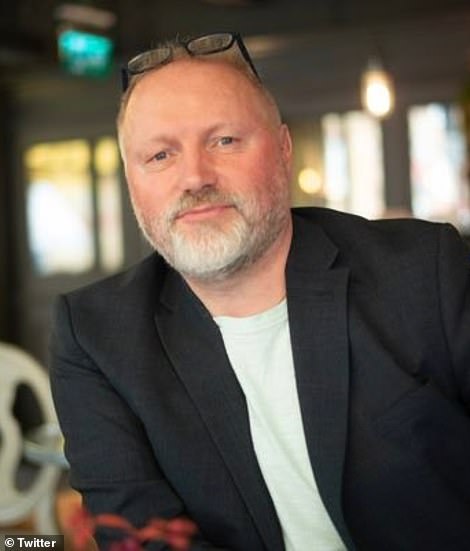 Footage of the arrest was widely shared on social media. Two separate videos showed the arrest of Mr Brady (left) and Harry Miller (right) who tried to prevent the former serviceman from being detained 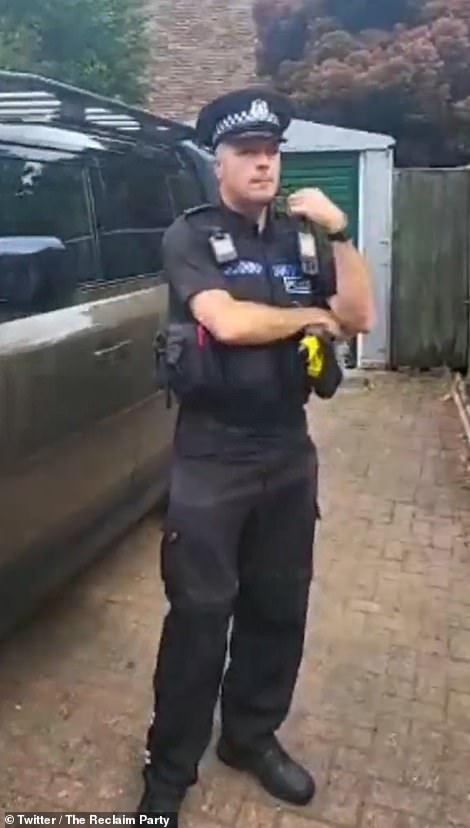 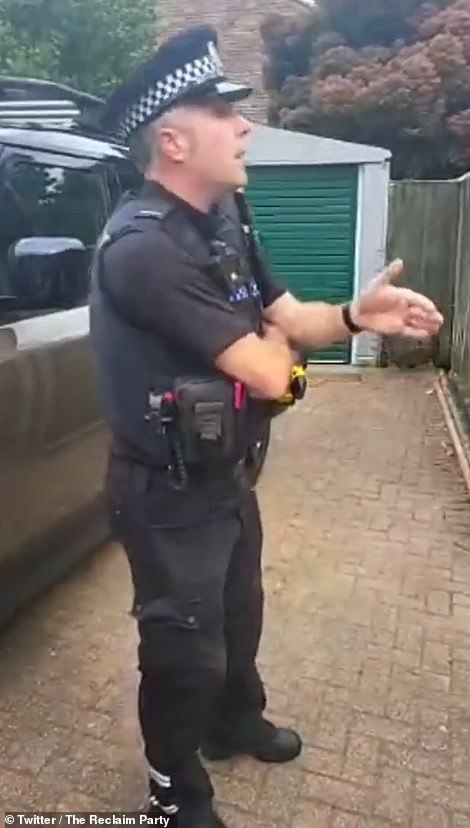 In a statement, Hampshire Police said: ‘Officers felt it was necessary to arrest a man at the scene so they could interview him in relation to the alleged offence’

Mr Brady shared the meme, which was originally posted by Laurence Fox, a 44-year-old actor turned campaigner, on social media.

Mr Fox said the image reflected his belief that LGBT pride month is ‘enforced with a sense of hectoring authoritarianism’.

Police returned to the Mr Brady’s property on Thursday, but he had contacted Mr Miller and Mr Fox during the intervening period.  The pair run the Bad Law project together, which claims to ‘challenge and depoliticise’ policing.

They agreed to attend the man’s home and were present when officers returned.

Mr Miller claims the former serviceman refused the offer of the educational course, leading to his arrest.

A statement from Hampshire Constabulary said: ‘When officers arrived they were prevented from entering the address to discuss a potential resolution to the matter.

‘As a result, officers felt it was necessary to arrest a man at the scene so they could interview him in relation to the alleged offence.’

But Mr Miller subsequently place himself between the officers and the veteran, telling police: ‘You arrest him, you’ve got to come through me.’

He was also arrested on suspicion of obstructing police and has been released under investigation, describing the incident as ‘one of the proudest moments of my life’.

In a separate video, Mr Miller is led to a marked police van in handcuffs and before he is taken inside, a cop asks: ‘Have you got anything on you that could harm me or you?’

The footage, captured by Mr Fox, also shows the actor and veteran accuse police of acting like the Gestapo.

Mr Miller won a Court of Appeal challenge over police guidance on ‘hate incidents’ in December after claiming it unlawfully interferes with the right to freedom of expression.

The former officer who describes himself as ‘gender critical’, was approached by colleagues at Humberside Police over alleged transphobic tweets in January 2020.

The force recorded the complaint as a ‘non-crime hate incident’, defined by the College of Policing’s guidance as ‘any non-crime incident which is perceived, by the victim or any other person, to be motivated by a hostility or prejudice’.

Mr Miller, from Lincolnshire, challenged both Humberside Police’s actions and the College of Policing’s guidance at the High Court and a judge ruled the force’s actions were a ‘disproportionate interference’ with Mr Miller’s right to freedom of expression.

Mr Fox returned to Twitter on Thursday unrepentant after being suspended for posting the meme.

Restorative Solutions is the firm behind the courses, which it continues to operate in North Yorkshire and West Yorkshire.

A spokesman for Hampshire Constabulary added: ‘We can confirm that officers explained that the hate-crime awareness course would be offered as an alternative to prosecution, in the event that the alleged offence was admitted.’