A man has died and three other people have been injured after a gun rampage in the Scottish Highlands today.

The 47-year-old man was found dead at a property on the Isle of Skye this morning, less than an hour after officers were called to reports of a seriously injured woman at a nearby property.

Police later found a man and a woman hurt at an address in Dornie on the Scottish mainland, and have said they believe all incidents are linked.

A 39-year-old man has been arrested in connection with the incidents, and has also been taken to hospital.

Police have not confirmed the nature of the incidents, although the local MP said they had been told ‘guns and knives’ were involved. 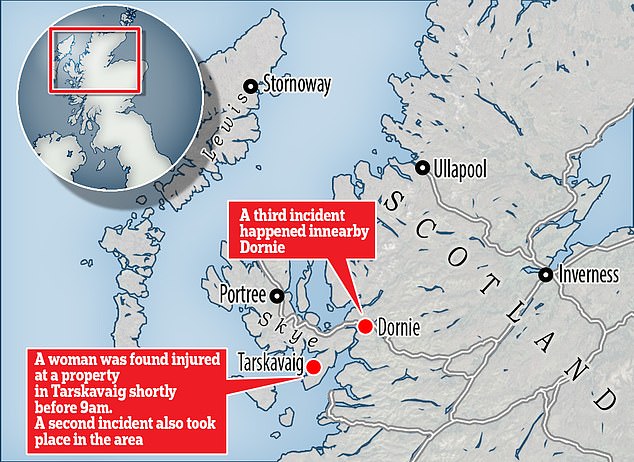 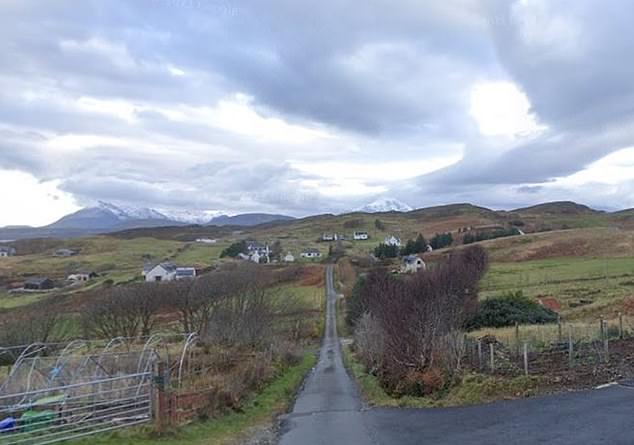 Dozens of police cars and the force helicopter were deployed to the remote Scottish region, which is a tourist hotspot, this morning after reports were made of an injured woman at a property in the Tarskavaig area of the island at 9am.

How this morning’s rampage unfolded

Police were called to a property in the Tarskavaig area, a remote region in southern part of the Isle of Skye, after reports of an injured woman.

Officers found a 32-year-old woman seriously injured, and she is airlifted to hospital in Glasgow for treatment.

Emergency services were then called to a property in Teangue, which is less than a 20 minute drive from Tarskavaig, after reports a firearm had been discharged.

On arrival they found a 47-year-old man, who was sadly pronounced dead at the scene.

Police were then called to a property in the Dornie area in Wester Ross after reports of a firearm being discharged.

On arrival they found a man seriously injured and an injured woman.

The man was airlifted to hospital in Inverness, while the woman was taken to a hospital on Skye.

Officers later arrested a 39-year-old man in connection with all three incidents.

He was taken to hospital in Inverness for treatment on unspecified injuries.

Inside they found a 32-year-old woman who was seriously injured and airlifted to Queen Elizabeth University Hospital in Glasgow for treatment.

Officers were then called to a property in nearby Teangue at around 9.30am, after reports a firearm had been discharged.

On arrival they found a 47-year-old man who was pronounced dead at the scene.

Emergency services then went to a property in the Dornie area in Wester Ross, on the Scottish mainland, after another firearm discharge.

A man was found seriously injured and taken to Raigmore Hospital in Inverness, while a woman was taken to Broadford Hospital on the Isle of Skye.

Police say a 39-year-old man who has been arrested in relation to all three incidents has also been taken to Raigmore Hospital.

Chief Superintendent Conrad Trickett, local policing commander for Highlands and Islands Division, said: ‘Incidents such as this are thankfully extremely rare but I understand that this will have a significant effect on the local community in these rural areas.

‘I would like to reassure people that we are treating these incidents as contained with no wider threat to the public.

‘There will a significant police presence in the area over the coming days and we will be working with partners to provide support to the local community. I would like to thank people for their co-operation as our investigation progresses.’

Earlier today Ian Blackford, the SNP MP for Ross, Skye and Lochaber, said he has been told ‘there is one fatality’.

He said: ‘This is dreadful and shocking news – especially for a place like Skye and Lochalsh.

‘I have been kept informed of the events and I understand a firearm and knives were involved. I have been told that there is one fatality and three injured.

‘Firearm regulations are there for a reason and there must be a review of this incident to ensure if any lessons can be learned from it.

‘I want to pay tribute to the emergency services, including the police and Scottish Ambulance Service, as well as the local authority. I understand the situation is under control.’

One patient was airlifted to the Queen Elizabeth University Hospital in Glasgow, while two others were taken by helicopter to Raigmore Hospital in Inverness, STV reported.

The Scottish Ambulance Service confirmed a fourth person is being treated at Broadford Hospital on Skye.

A dozen police cars including armed response units and the force helicopter were deployed to the scene on Wednesday morning. 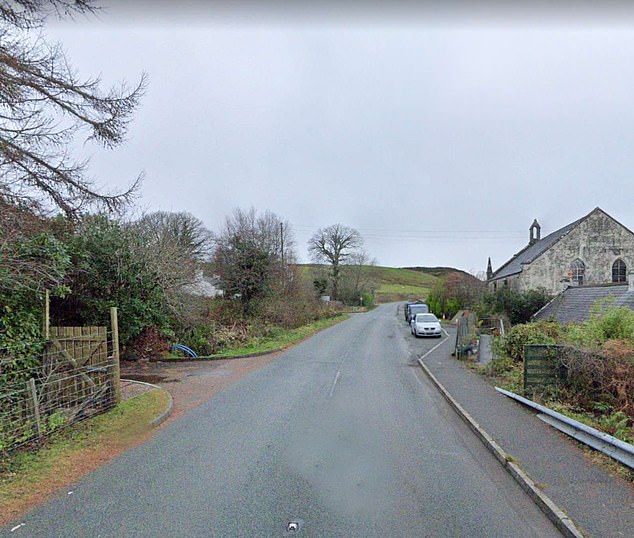 Officers were then alerted to a second incident in nearby Teangue, which is also on the Isle of Skye (pictured)

Locals have since reported that the suspect is believed to have used a knife and firearm in a series of attacks, however this hasn’t yet been confirmed by police.

One resident said at the time of the incident: ‘Stabbing in Sleat, then shotgun was used in Dornie. The victim is on the way to hospital.

‘This is from a Dornie resident. Don’t know if the perpetrator is caught yet.’

Following the man’s arrest, police have described the situation as ‘contained’.

Speaking today a Police Scotland spokesperson said: ‘We were made aware of a woman injured at a property in the Tarskavaig area on Skye shortly before 9am on Wednesday, August 10.

‘Police are also attending two further incidents in Teangue on Skye and Dornie which are being linked. 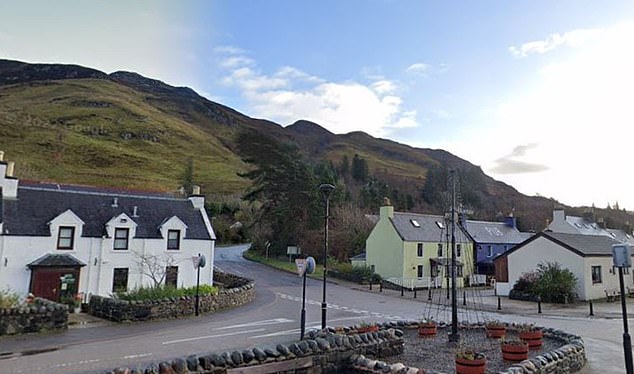 Despite the  police presence in Teangue (pictured) on Skye, Police Scotland says there is no further risk to the community

‘A 39-year-old man has been arrested in connection with the incidents. At this stage we believe the situation is contained and there is no risk to the wider community.

Convener of the Highland Council, Bill Lobban added: ‘We are thankful to our emergency services colleagues for bringing this very serious and shocking incident to a close.

‘We will be providing support to the communities and our partners in every way possible.

‘The communities of Skye and Dornie will be shocked and saddened by these incidents and our thoughts are with the individuals affected.’

Skye attracts 500,000 visitors-a-year with such natural features as The Fairy Pools and The Old Man of Storr.

Dornie is separated from Skye by the island’s famous bridge.