Lovers of the Oktoberfest beer festival held in Munich each year are set for a shock as the German is government mulling proposals to enforce compulsory mask-wearing from October to March.

The plans would encompass mask wearing in all public spaces – including bars, restaurants and shops – during the colder half of the year in a bid to battle the spread of Covid over the winter months, in a so-called ‘O-bis-O’ (Oktober bis Ostern) scheme, German paper Die Welt reported on Friday.

Covid cases usually rise over the winter months as people retreat indoors, so advocates of the plan hope to counteract that trend and also tackle other lung and flu infections.

The country has recently reported between 50 and 130 coronavirus-related deaths a day, according to official figures in what has been described as a ‘summer wave’ even before the cold weather even arrives.

It is unclear whether the rules would apply to schools and kindergartens. Currently in Germany mask wearing is only obligatory on public transport and medical centres.

Last year’s Oktoberfest was cancelled entirely by German authorities, which would normally attract 6 million attendees, so beer aficionados will be more than disappointed if this year’s festival is disrupted by compulsory mask wearing.

The ‘O-bis-O’ rule refers to motoring regulations, which require drivers to put winter tyres on their cars during the months when the German cold really bites. 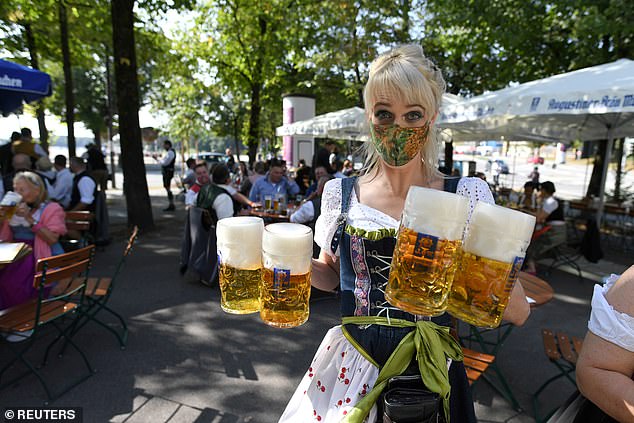 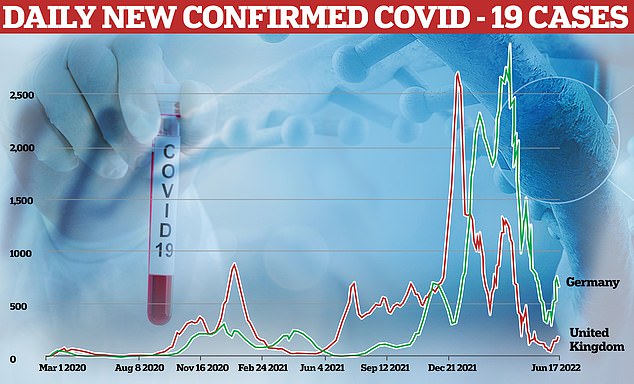 Covid cases in Germany have been ticking up even before the winter arrives, with some analysts declaring the country to be experiencing a ‘summer wave’ 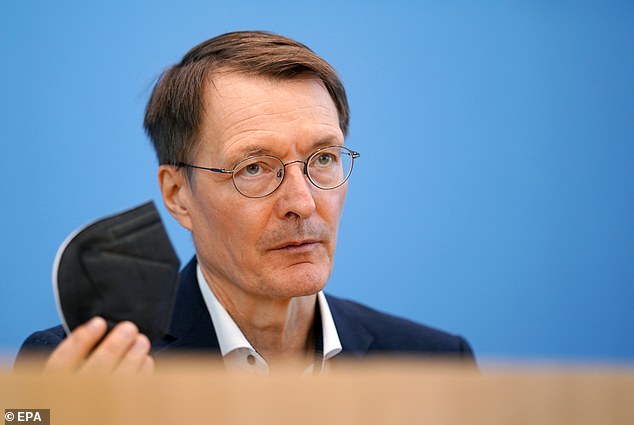 Germany Health Minister Karl Lauterbach holding up a mask. The country has recently reported between 50 and 130 coronavirus-related deaths a day, according to official figures in what has been described as a ‘summer wave’ before the cold weather even arrives 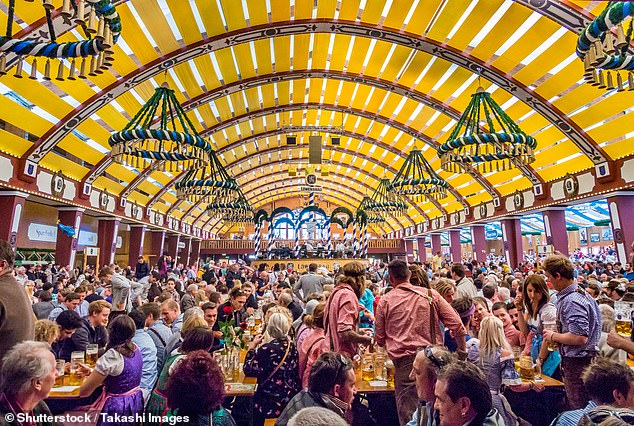 The Loewenbraeu-Festhalle tent at the Oktoberfest in Munich. The iconic festival will likely be hit by the proposals

The plan will come as a disappointment to the more than 80 million Germans who have been enjoying reborn freedoms as Covid rules have been relaxed across Europe.

With summer arrived, millions of people have been enjoying social activities and interactions without onerous Covid restrictions such as maintaining social distance and limiting group sizes.

The German government is likely to wait on the findings of a scientific commission before it decides which rules to put into the next version of the Infection Protection Act, which is set to expire in September.

It’s the commission’s job to tell the government by the end of the month which restrictions have been effective.

Germany Health Minister Karl Lauterbach presented his seven-point plan for the autumn on Friday, when Covid cases are expected to rise, but did not comment on reports of a return to compulsory mask wearing.

He urged residents and visitors to wear face masks indoors to protect themselves and others from the coronavirus, but he acknowledged that current data doesn’t justify making mask use a legal requirement.

The libertarian Free Democratic Party, which is part of the country’s governing coalition, has been particularly vocal in pressing for an end to COVID-19 measures. 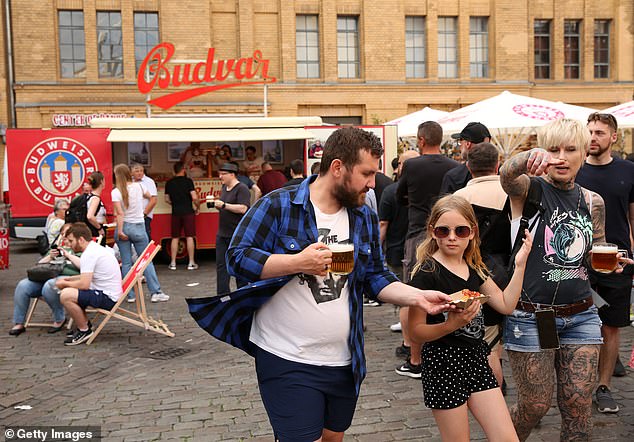 The plan will come as a disappointment to the more than 80 million Germans, who have been enjoying reborn freedoms as Covid rules have been relaxed across Europe 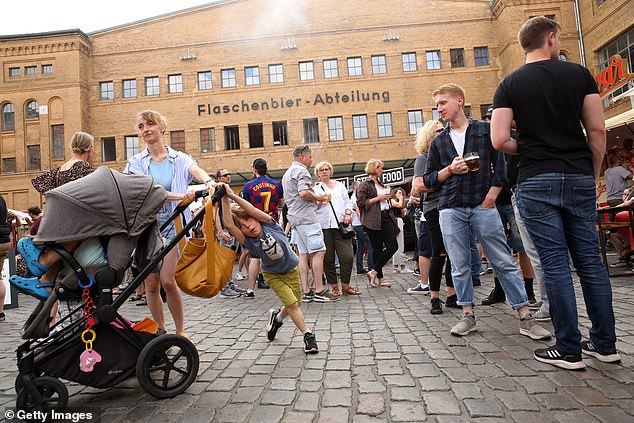 With summer arrived, millions of people have been enjoying social activities and interactions without onerous Covid restrictions such as maintaining social distance and limiting group sizes 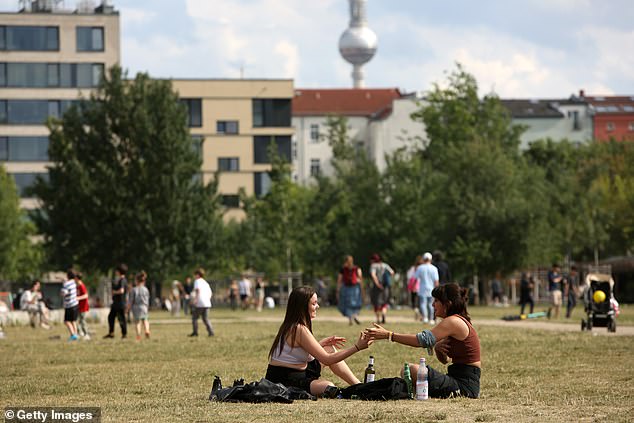 Lauterbach, an epidemiologist by training, said Germany was experiencing an expected increase in cases that amounted to a ‘summer wave.’

‘I ask those who want to protect themselves or others to wear masks indoors,’ Lauterbach, a member of the Social Democrats, told reporters in Berlin, noting that cases could continue rising over the coming months.

‘Voluntarily wearing masks needs to be a normality indoors.’

The dominant variant circulating in Germany is comparatively mild, and many residents are vaccinated or have recovered from COVID-19, meaning they are less at risk of serious illness, the health minister said.

‘There is no need to to panic,’ he said.

Lauterbach said the government was working on obtaining a broad supply of vaccines for the fall that would respond to all the main variants.

Citizens who are at risk, or who want to avoid endangering others, should consider getting a second booster shot, he added.

Back in England, Covid cases surged by 40 per cent last week, in what is feared to be the start of a fresh wave of the virus.

The Office for National Statistics (ONS) estimates 1.13million people were infected on any given day in the week ending June 10, the equivalent of one in 50 of the population. It marks the biggest weekly jump since December, when Omicron was first seeded in the country.

Cases are also rising in Wales and Northern Ireland (one in 45 had the virus last week) and Scotland (one in 30).

The ONS’ weekly infection survey has become the best barometer of the outbreak in the post-pandemic era after free testing was axed and the daily dashboard was scaled down.

Data suggests the resurgence is being driven by the BA.4 and BA.5 subvariants of Omicron, which are thought to be even more infectious than the parent strain. Scientists also believe the Queen’s Platinum Jubilee celebrations may have fuelled the uptick.

Outbreaks of Covid are rising in care homes and hospital admissions are also increasing, and experts fear that it could put more pressure on an already overwhelmed health service.