DonateSubscribe
Home News Update International News Couple 'murdered their baby' after she was released into their care, court hears
Comment


A couple murdered their baby hours after hearing steps were being taken to safeguard her care, a court heard this afternoon.

She had been released into their care on January 25, 2018, against the advice of hospital staff who feared neglect but were overruled by social services, jurors heard.

But Wood Green Crown Court was told social worker Theresa Ferguson a week later told the couple Lily-Mai would have to go into a residential unit.

That night Saint George made a 999 call saying Lily-Mai had stopped breathing and was unresponsive. She died in Great Ormond Street Children’s Hospital on February 2.

The court heard medics at the hospital had raised concerns over two weeks earlier but they were told nothing could be done.

But on the day before her release, Ms Ferguson became worried about the child after police were called to a domestic at the parents’ flat.

She made a referral for a ‘legal gateway meeting’ which was the first step in intervening in her care but then went on holiday.

When she visited again on January 31, Saint George refused to engage and stormed out. That night she made the 999 call. 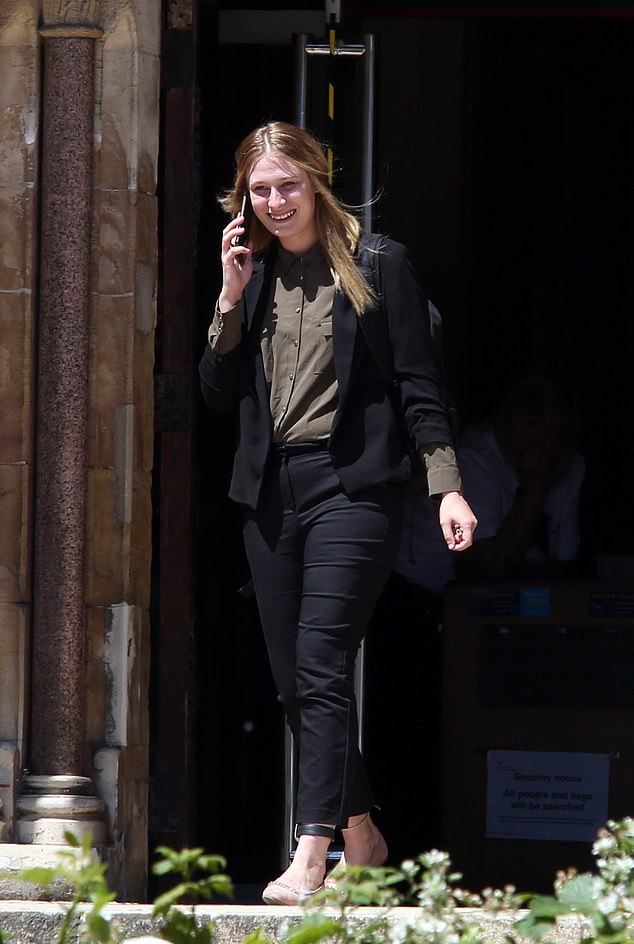 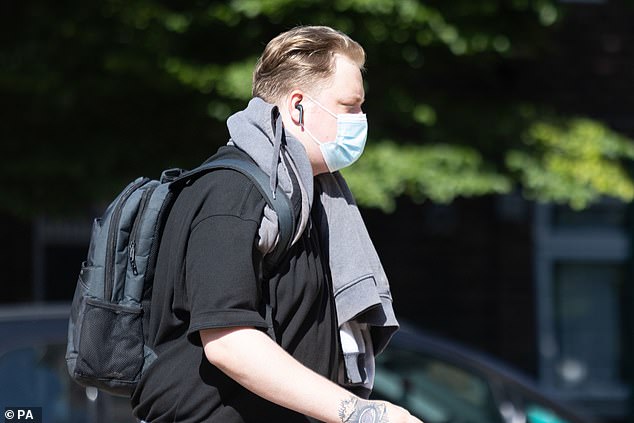 Darren Hurrell arrives at Wood Green Crown Court, London, where he and Lauren Saint George are charged with the murder

Prosecuting the case Sally O’Neil QC said: “Almost all of the professionals at the hospital were opposed to the baby being discharged into the parents’ care at home,

‘They had expressed their concern about the parents’ ability to meet the baby’s emotional, developmental and physical needs on many occasions to the social services.

‘But nonetheless, the decision was made to discharge the baby into the care of her parents and the hospital had to accept that and deal with the situation as best they could.’

The court heard this morning Lily-Mai was born prematurely in November 2017 and spent the first two months of her life in Barnet Hospital.

She was just ten weeks old when her Haringey parents Lauren Saint George and Darren Hurrell, both 25, allegedly shook her to death.

A post mortem found she died from a serious head injury and had also suffered 18 rib breaks, two fractures in her right leg and severe bruising.

Staff were worried Saint George and Hurrell – who had been homeless – were incapable of looking after her and made referrals to social services.

Neonatal sister Deborah Hodge said Lily-Mai’s mother had told staff that she ‘hated’ the noises Lily-Mai made and wished she would ‘cry instead of groaning’.

Staff held meetings with them on January 16, 2018, and six days later where they expressed ‘concerns about the possibility of neglect’.

They were so worried they even raised the possibility of a mother and baby unit to allow closer supervision of Lily-Mai and her parents. 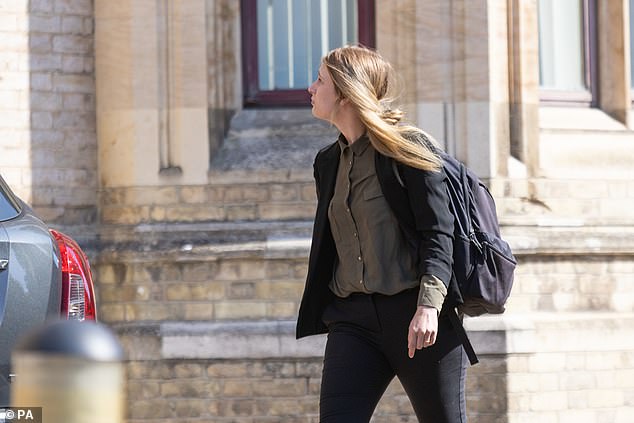 Lauren Saint George arrives at Wood Green Crown Court, London, for the start of the trial

November 21, 2017 – Lily-Mai is born prematurely and spends the first two months of her life in Barnet Hospital.

January 16, 2018 – Staff at the hospital Staff hold meetings with the parents when they talk about the care of Lily-Mai

January 21, 2018 – Another meeting is held where ‘concerns about the possibility of neglect’ are aired.

January 24, 2018 – Police are called to a domestic incident at Saint George and Hurrell’s flat in Haringey. Social worker Theresa Ferguson is informed and she makes a referral for a ‘legal gateway meeting’ which was the first step in intervening in Lily-Mai’s care.

January 25, 2018 – Lily-Mail is released into the care of both of her parents, despite medics’ concerns. Theresa Ferguson goes on holiday.

January 26, 2018 – Duty social worker Muriel Caboste visits the flat and decides there are not increased child protection issues. This is despite her noticing the parents were not following the feeding and medication chart that they had been provided with on discharge.

January 31, 2018 – Theresa Ferguson has returned from holiday and visits them at their flat to discuss the ‘legal gateway meeting’ and how to safeguard Lily-Mai. Saint George refuses to engage and storms out. Four hours later Saint George rings 999 and says Lily-Mail is seriously ill and she is rushed to hospital.

But the baby was released into their care on January 25 after Haringey Council social services said it would not be possible.

Saint George The mother and Hurrell both deny murder, manslaughter, causing or allowing the death of a child and cruelty to a person under 16 years old.

Mrs O’Neill QC said of the 999 call: ‘Lauren Saint George said that their baby wasn’t breathing, that she was premature, had anaemia and had gone white and floppy so she thought her anaemia had kicked in.

‘Darren Hurrell said that she had a heartbeat but wasn’t breathing and later that she was trying to gasp for air.

‘Lauren Saint George said that she wasn’t responsive ‘like she’s not opening her eyes or crying.’

‘The paramedics arrived very shortly afterwards and found the baby cyanosed which means blue around her lips and nose and very pale. She wasn’t breathing or moving but had a pulse. She was given emergency ventilation.

‘When asked what had happened, Darren Hurrell said that he had picked the baby up from her cot because she was crying and her head fell back and she became floppy and stopped breathing.

‘He said he had performed CPR on her and said the baby had been pale and unsettled for a couple of days and not taking her milk properly.’

Lily-May was taken to North Middlesex Hospital where a CT scan revealed bleeding in her brain, jurors heard.

She was then transferred to Great Ormond Street Hospital for a neuro-surgical procedure and was found with brain haemorrhages and areas of brain death.

Her condition is said to have worsened and doctors decided not to resuscitate her.

On February 2 February treatment was withdrawn and she was pronounced dead.

A post-mortem examination revealed recent haemorrhages in Lily-Mai’s brain and spinal cord as well as damage caused by lack of oxygen or blood, the court heard.

Pathologists also found 18 rib fractures and fractures in the two lower bones of her right leg.

These injuries were all said to have been recent. Bruises were also discovered on the baby’s body of a nature consistent with impact or gripping, jurors were told. 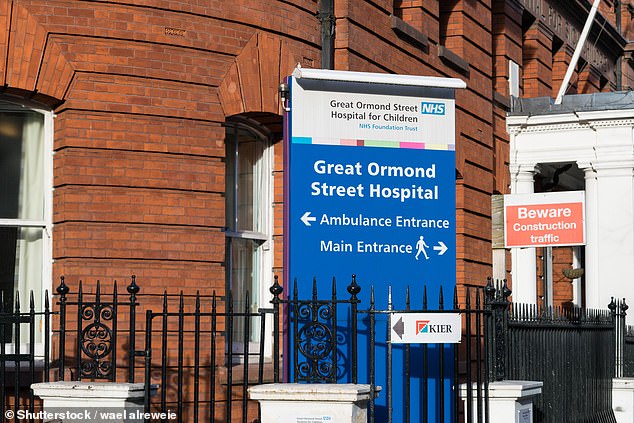 Lily-Mai was transferred to Great Ormond Street Hospital where she died on February 2, 2018 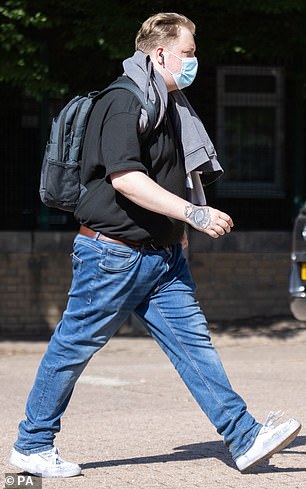 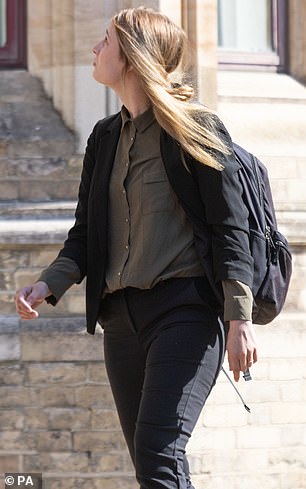 Ms O’Neill said: ‘The conclusion…was that this was an example of a fatal head injury of the shaking or impact type and he concluded that the cause of death was head injury.

‘The injuries were said to be in keeping with suspected physical abuse.

‘It is the Crown’s case that these two defendants, Lily-Mai’s parents, were responsible for her death and that these fatal injuries were caused to Lily-Mai by forceful shaking shortly before that 999 call only six days after she had been discharged into their care.’

Hospital and care staff had raised serious concerns about Lily-Mai being discharged into her parents’ care, jurors heard.

Several members of hospital staff made referrals to social services, the court was told.

Neonatal staff held meetings with the parents in the lead up to Lily-Mai’s discharge, on 16 January and six days later.

Lead social worker Theresa Ferguson, from Haringey Child and Family Services, allegedly told the hospital team that this was not an option.

A report by neonatal sister Deborah Hodge alleged that Saint George had told staff that she ‘hated’ the noises Lily-Mai made and wished she would ‘cry instead of groaning’.

Ms O’Neill said: ‘Almost all of the professionals at the hospital were opposed to the baby being discharged into the parents’ care at home and had expressed their concern about the parents’ ability to meet the baby’s emotional, developmental and physical needs on many occasions to the Social Services.

‘Nonetheless, the decision was made to discharge the baby into the care of her parents and the hospital had to accept that and deal with the situation as best they could.’