Children should be banned from ever being able to buy cigarettes, according to recommendations unveiled today.

The age limit for purchasing cigarettes in England, currently set at 18, should rise by 12 months every year until no one can legally buy a tobacco product, a Government review has set out.

Health Secretary Sajid Javid tasked former children’s charity chief Javed Khan with finding ways England could be smoke-free by 2030 — defined as less than five per cent of people smoking, compared to the current 15 per cent.

However, the proposed policy, which is already in place in New Zealand and means anyone born after 2008 will never be able to buy cigarettes, is expected to be rejected by ministers.

Among the review’s 15 recommendations are proposals for the NHS to promote e-cigarettes and vapes to smokers. And tobacco giants could face an extra £700million in tax every year to fund quitting support and e-cigarettes on the NHS.

The recommendations in Mr Khan’s tobacco report are expected to go out to consultation before they are implemented. 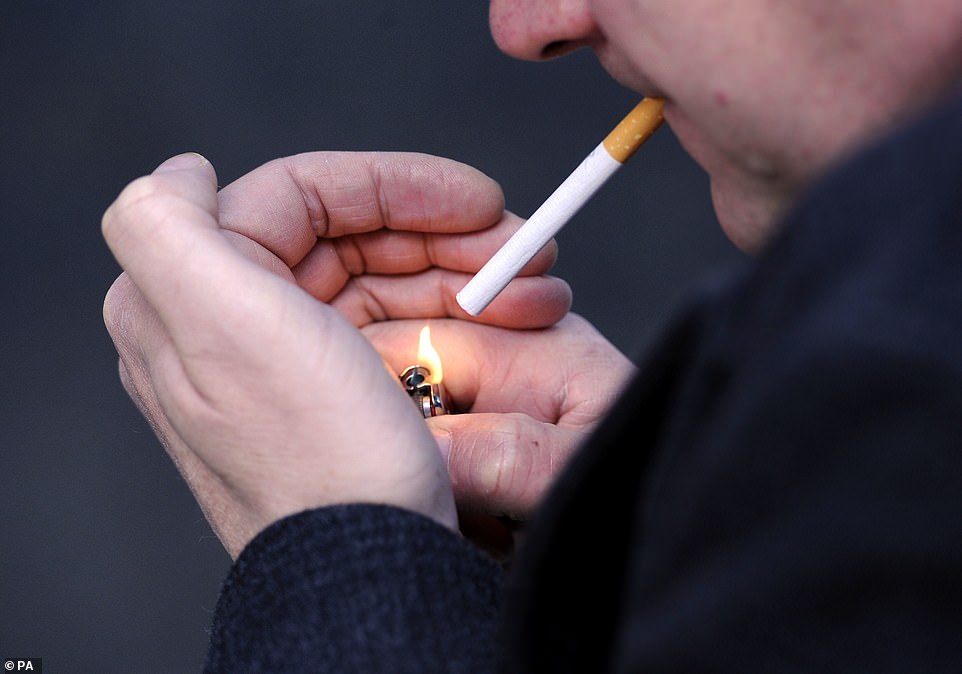 Radical plans to raise the legal smoking age could be announced on Thursday, when an independent report is due to land (file image) 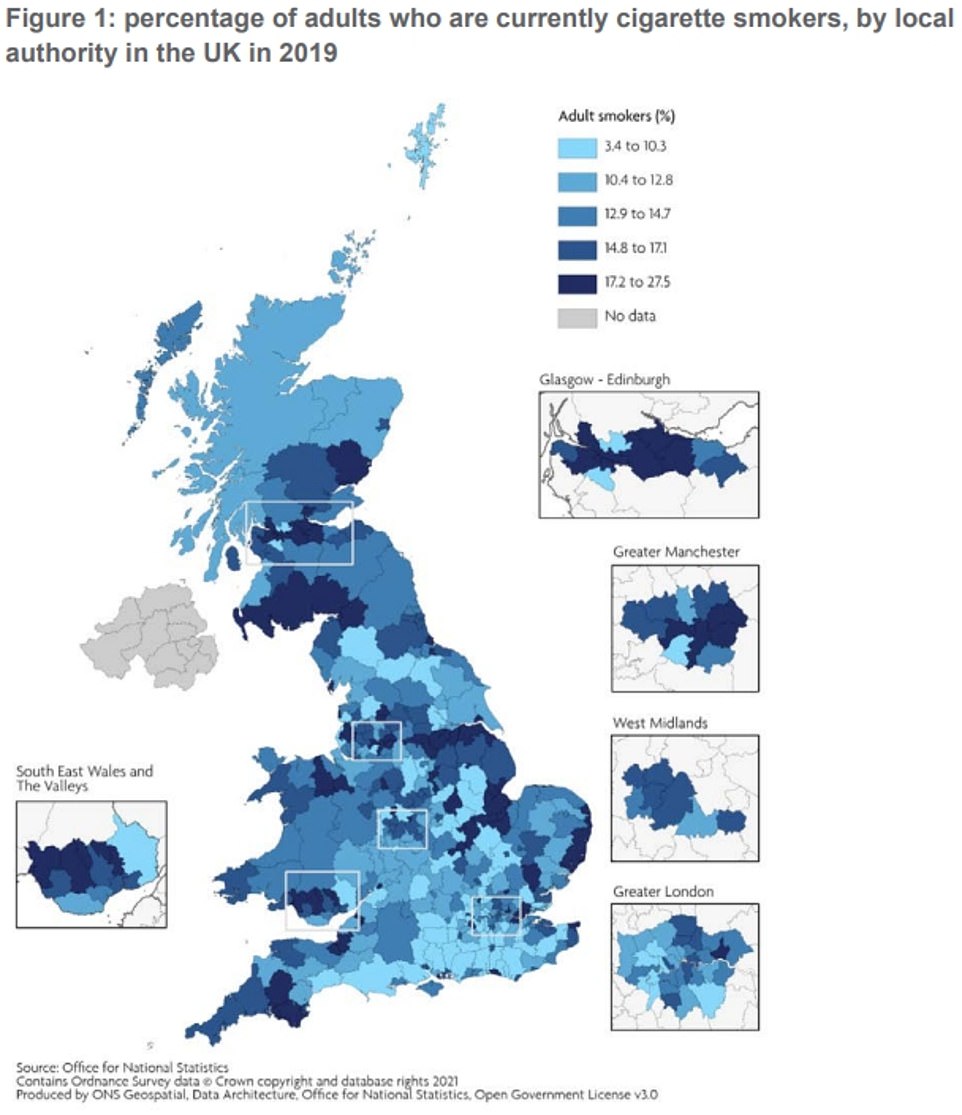 Around 6million people smoke in the UK and it is behind 64,000 deaths every year. The NHS spends £2.4billion every year treating smoking-related conditions. The map shows adult smoking rate in Britain through colours representing increasing ranges of prevalence, from the 3.4 per cent to 10.3 per cent range, up to the 17.2 to 27.5 per cent range. The highest smoking uptake is found in parts of the North West, East Midlands, South Yorkshire, East of England and South West 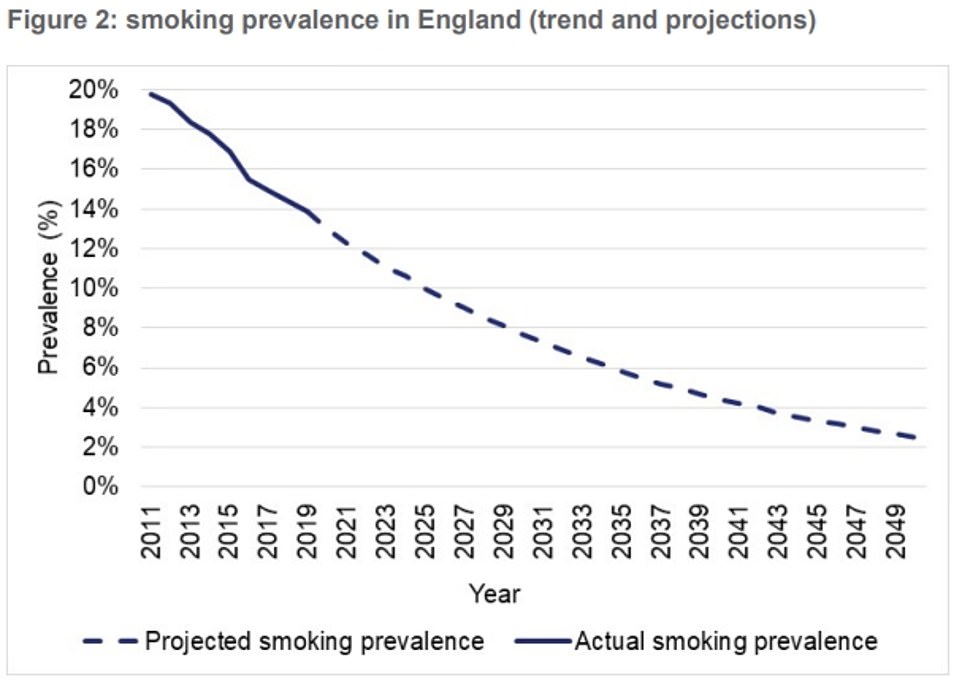 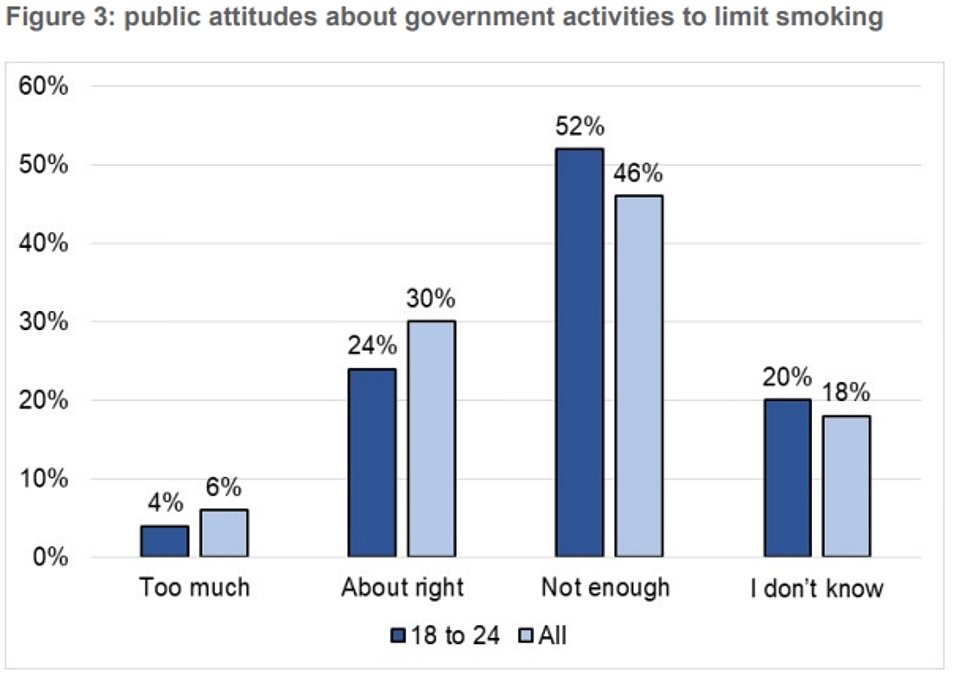 Could cigarettes be slapped with INDIVIDUAL warnings?

Contents hide
I. Could cigarettes be slapped with INDIVIDUAL warnings?
II. How dangerous is smoking for the heart? 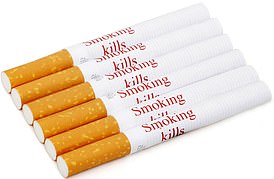 Tobacco manufacturers would have to use eight different warnings in rotation on its sticks and rolling paper under the terms of the Cigarette Stick Health Warnings Bill.

These would include ‘smoking kills’ and other messages to highlight the devastating health effects, the financial cost and contact details for advice on quitting.

He first raised it as a health minister in Margaret Thatcher’s government in 1979.

Around 6million people smoke in the UK and it is behind 64,000 deaths every year. The NHS spends £2.4billion every year treating smoking-related conditions.

Dr Ayesha Verrall, a health minister in New Zealand, explained that the policy is ‘bold action’ brought in to reduce the harm from smoking to younger generations.

She told Radio 4’s Today programme that people aged 14 and under will never be able to buy cigarettes in the country.

She said: ‘We know we will have to do some work around enforcement but New Zealand has regulated access to vaping products.

‘So it is not a prohibition approach, it is a harm minimisation approach. And there is an alternative source of nicotine that smokers can take.’

Professor Sanjay Agrawal, chair of the Royal College of Physicians tobacco advisory group, who contributed to the UK review, said it would be ‘very welcomed’ if the New Zealand-style approach was adopted in the UK.

He told the Today programme: ‘I think we need to do everything possible that we can to reduce the uptake of smoking in children.

‘We know that most people become addicted to tobacco in their teenage years and certainly before the age of 25 and we know that smoking prevalence in that age group is highest compared to all other age groups.

‘Anything that we can do to reduce uptake is welcomed.’

Professor Sanjay Agrawal said the rule would be a ‘gradual’ one that increases the age every year, while a US-style approach, where the age increased from 18 to 21 was more severe.

But he said the New Zealand approach should be part of a ‘suite of measures’ that also helps current smokers to quit and for smoking to be made ‘less affordable and available’.

He said that Britain has to take the opportunity to ‘support the next generation so they are not exposed to the harms of smoking’.

Professor Agrawal said: ‘I work in a hospital. My clinics are full sadly of people who come to harm from smoking, either with cancers, heart attacks, strokes, other lung diseases.

‘The effect of smoking is still very prevalent and we need to do more to stop our youth from ever taking up that habit. And when I speak to smokers they regret ever having started.

‘We know smoking is an addiction and once you get hooked in it is very difficult to stop. Preventing it to begin with is by far the best way forward.’

The review, which will be published later this morning, has been plagued by repeated delays amid speculation its recommendations were met with pushback.

The minimum age for tobacco purchases was raised from 16 to 18 across Britain in 2007, when it also became illegal to smoke in enclosed spaces.

Officials followed up the measures in 2017 with a policy that meant all branded packaging had to be replaced with plain greenish-brown boxes.

As well as controversially raising the legal age, the call for new taxes would come at a time when Boris Johnson has been urged to cut taxes to save his job.

The PM has vowed to get back to the ‘fundamental Conservative instinct’ of reducing the tax burden, after narrowly surviving a no confidence vote. 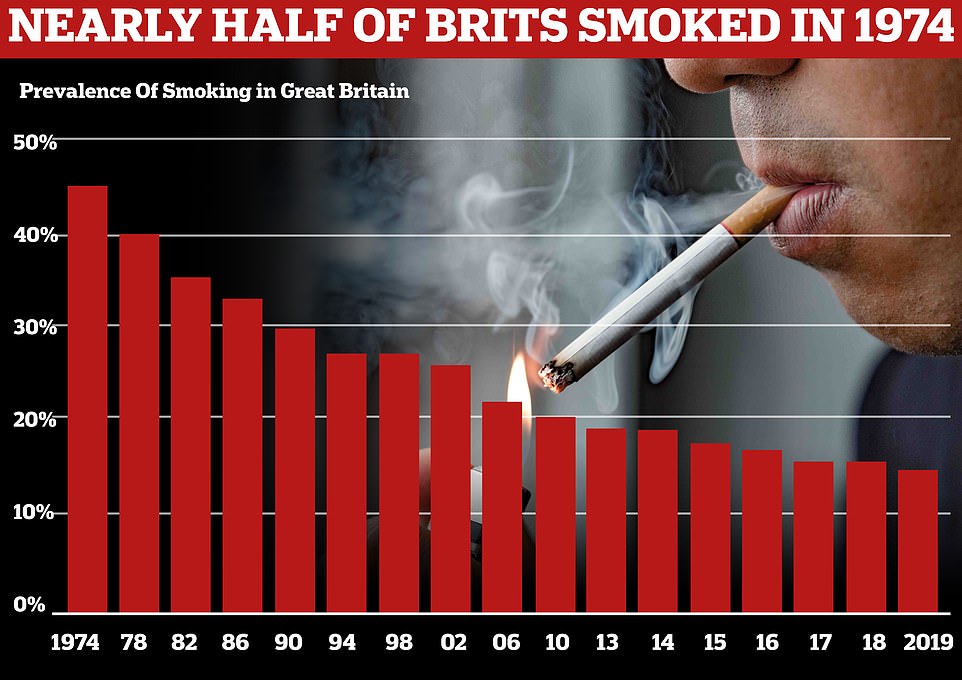 Smoking has steadily decreased since 1974, with around 15 per cent of the population smoking in 2019. That year, the Government set a target of becoming smoke-free by 2030

Last month he scrapped plans for a ban on multibuy junk food after being convinced that now was the wrong time to heap more costs on families already struggling with the cost of living crisis.

Industry sources have described its recommendations as ‘quite radical’.

How dangerous is smoking for the heart?

How does tobacco damage the heart?

Tobacco smoke contains more than 7,000 chemicals, including tar and others that can narrow arteries and damage blood vessels.

While nicotine – a highly addictive toxin found in tobacco – is heavily linked with dangerous increases in heart rate and blood pressure.

Smoking also unleashes poisonous gases such as carbon monoxide, which replaces oxygen in the blood – reducing the availability of oxygen for the heart.

How many people does smoking kill?

Smoking is known to kill more than seven million people across the world each year, including 890,000 from breathing in second-hand smoke.

But many people are unaware that nearly half of those deaths, around three million, are due to heart disease, including heart attacks and strokes.

Simon Clark, director of the smokers’ group Forest, said: ‘You don’t have to be 21 to know that smoking is potentially harmful to your health, it’s drummed into every child from an early age.

‘If you can legally have sex at 16, drive a car at 17 and purchase alcohol at 18, you should be allowed to make an informed choice to buy tobacco at 18.

‘In the eyes of the law you are an adult at 18 and you should be treated like one.’

Smoking rates in the UK have fallen from about half of the population in the 1970s to just 15 per cent now.

But use increased by 25 per cent among the under-30s during the pandemic, the equivalent of more than 600,000 new smokers.

The Government aims to slash smoking rates to just 5 per cent by 2030.

But Mr Khan, in an interview before his review, warned the target would not be met without action to restrict sales.

His report is also rumoured to include a levy on companies that make more than £700million each year.

This will then be used to fund quitting support and e-cigarettes on the NHS, according to sources.

A Department of Health and Social Care spokesperson said cutting cigarette use remained one of its top priorities.

But the Prime Minister is under pressure from all corners of his own party to move away from nanny-state and high tax policies.

Mr Johnson told the Cabinet yesterday he wanted to get back to his Tory instinct of cutting taxes as the next general election approaches.

He stressed to Cabinet colleagues that delivering tax cuts would help produce ‘considerable growth in employment and economic progress’.

The PM also ordered ministers to bring forward new initiatives to slash Government spending in order to free up cash for tax cuts.

Mr Johnson introduced a manifesto-busting national insurance hike in April to fund the NHS’ recovery from the pandemic.

His Government also brought in a windfall tax on gas and oil companies this month to soften the energy crisis for families.

A DoH spokesperson said: ‘Tackling issues such as smoking is a priority for the office for health improvement and disparities, and a key part of the government’s levelling up agenda.

‘This is why we launched the independent review of our bold ambition to make England smoke-free by 2030.

‘The review will provide independent, evidence-based advice on potential interventions that will inform our approach to tackling the stark health disparities associated with tobacco use – and we look forward to seeing the report in due course.’