Jason Alexander livestreamed himself running through the woods in Thousand Oaks, California, as he approached the venue.

The 40-year-old was able to slip inside the venue, which appeared to be decorated in roses and a pink theme, before he was confronted by security outside.

Alexander claimed that Britney had ‘invited him’ to the event and that she was his ‘first and only wife’ before he admitted he was ‘crashing’.

He was swiftly tackled to the ground by security and escorted off the premises.

Alexander and Spears tied the knot in Las Vegas in 2004 and were married for just 55 hours before they had their union annulled. 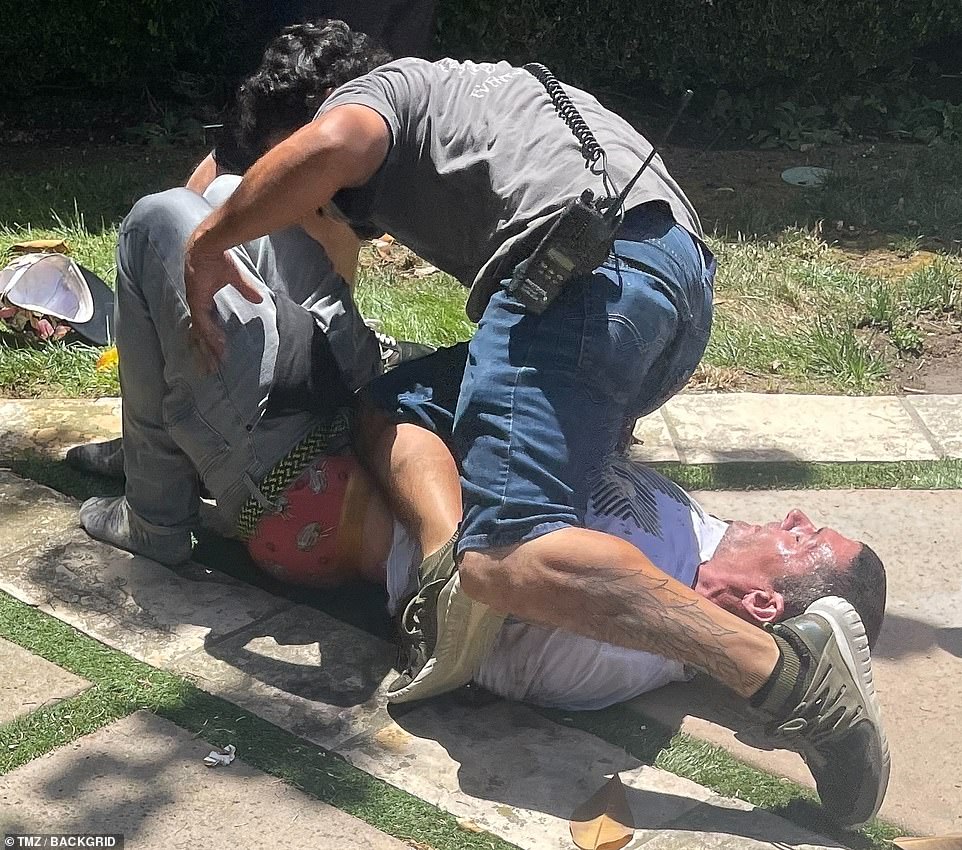 Britney Spears’ wedding was just dramatically interrupted, as her first husband, Jason Alexander, showed up trying to crash the event … resulting in a police response. 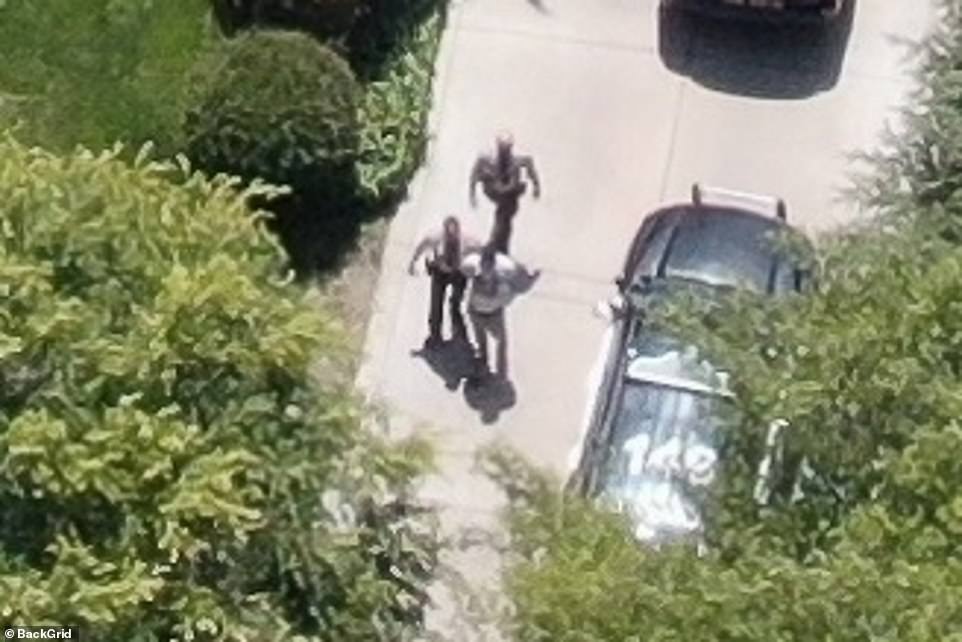 Britney Spears ‘ first husband Jason Alexander dramatically crashed his ex’s wedding to longtime boyfriend Sam Asghari. He can be seen in aerial footage being escorted off the property 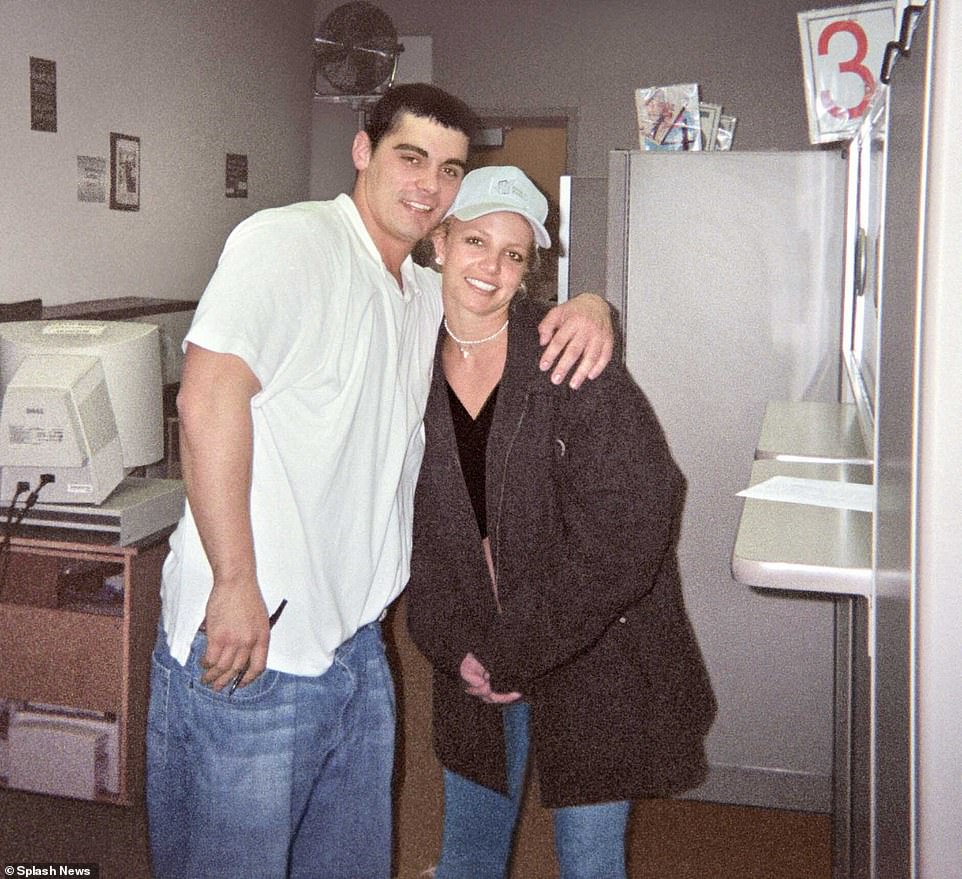 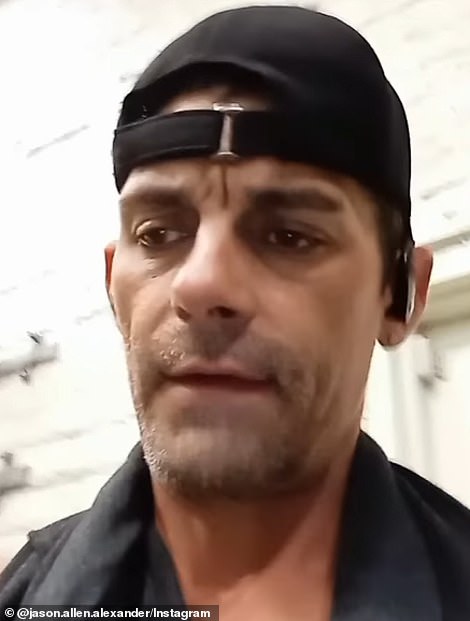 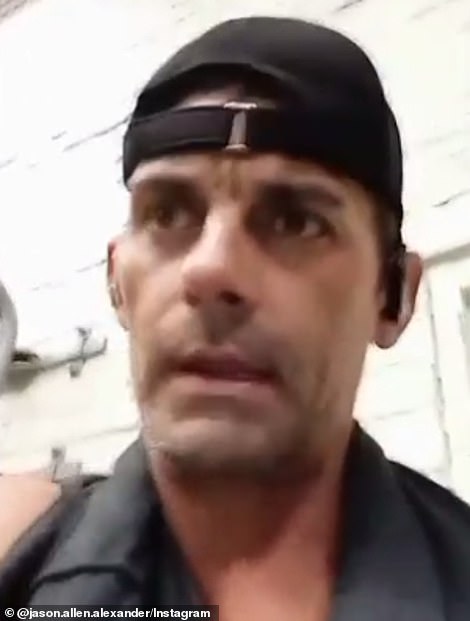 Alexander, 40, filmed himself talking to camera before he stormed into Britney’s wedding 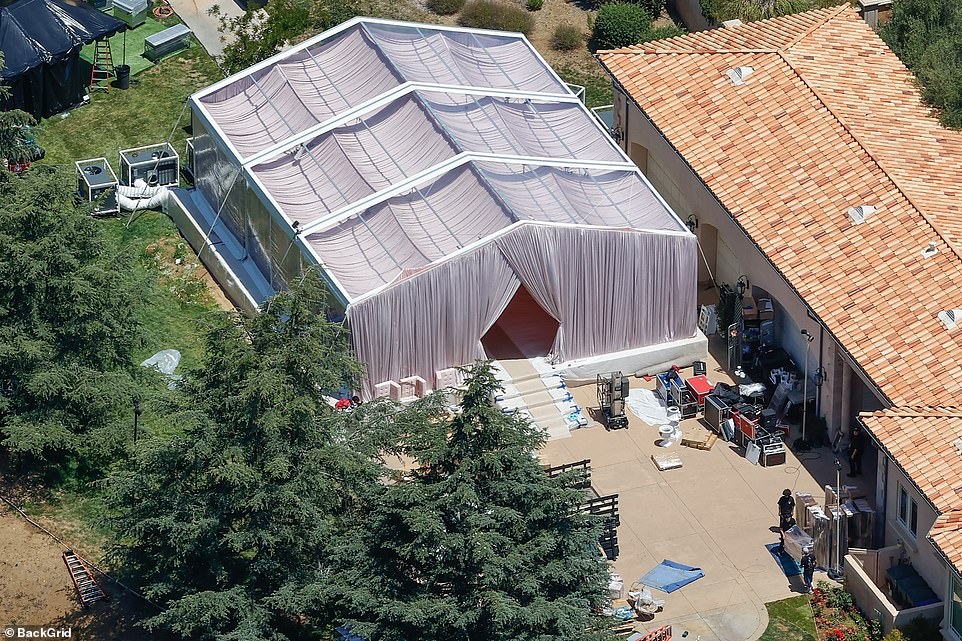 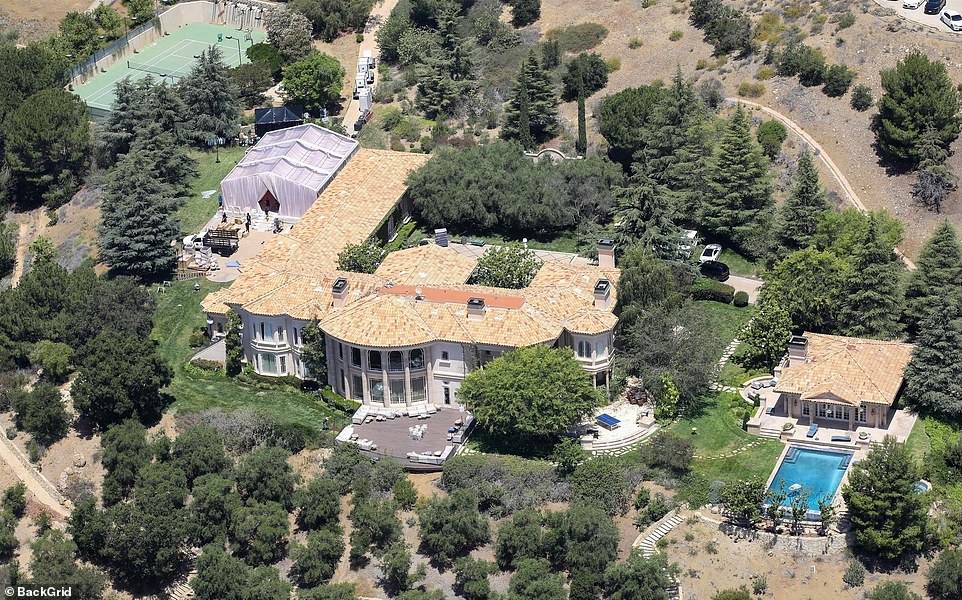 The wedding will is to place at Britney’s 12,464-square-foot, five-bedroom, eight-bath Italian villa – which is located in a gated community in Thousand Oaks, California. Alexander scaled the fence 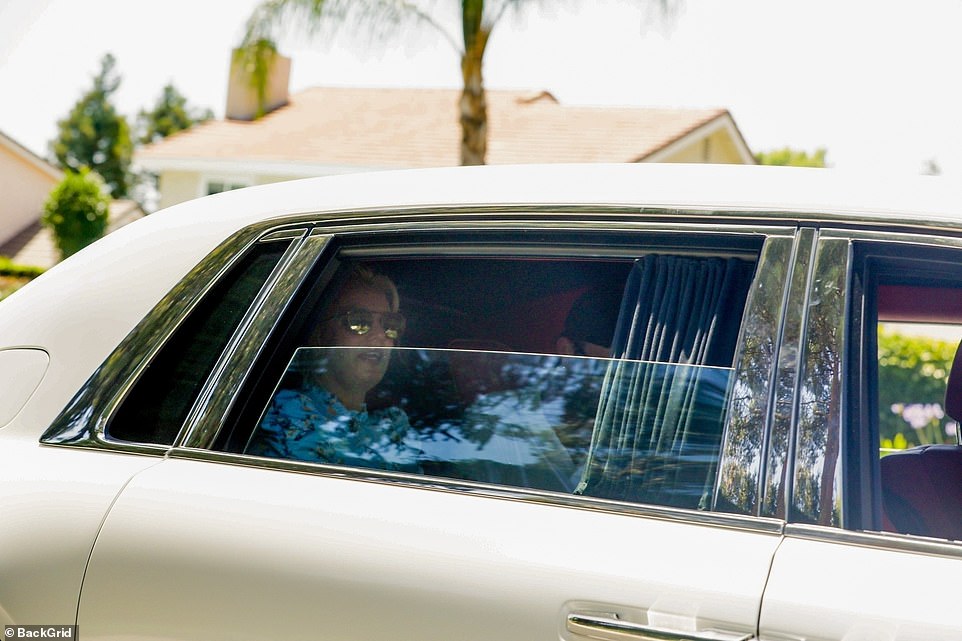 The famed pop star was seen wearing a floral shirt and sunglasses during the outing. Her blonde hair was pulled back into a ponytail earlier on Thursday 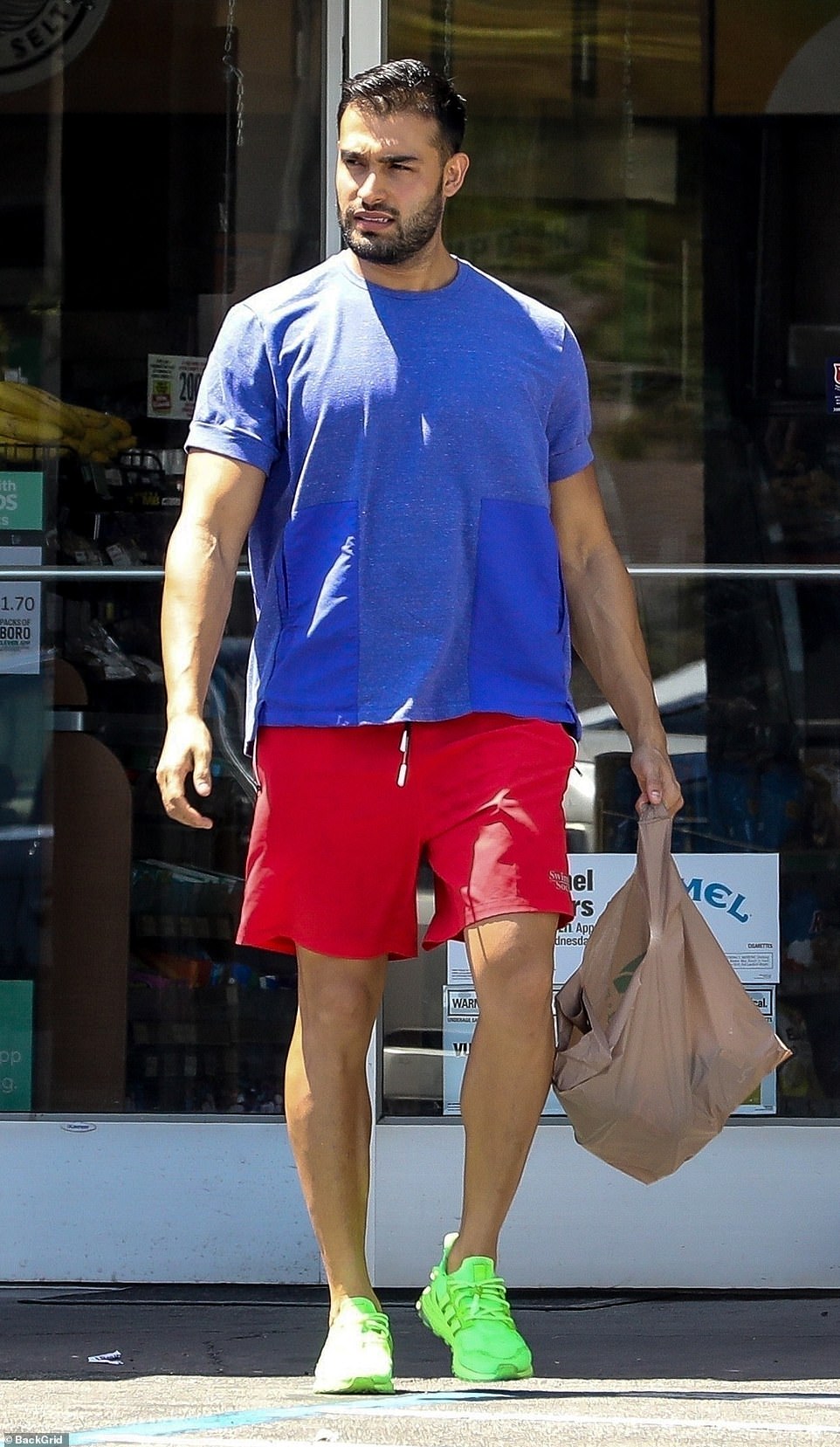 In a 10 minute long Instagram live video, Alexander can be seen scaling a fence on the perimeter of Spears’ property.

He encounters a number of security personnel and openly states his name and intention.

As Alexander descends a hillside, he enters the wedding tent where planners are still busy putting the finishing touches.

Several rows of wooden benched can be seen lined up, together with an alter covered in pink roses under which the couple will say their vows.

Alexander introduces himself to several of the workers present who are helping to put everything into place.

He then marches inside the house demanding to know: ‘Where’s Britney?’

The video occasionally cuts out completely but Alexander can be seen bounding up a fight of stairs to the second story before entering what appears to be a bedroom while still calling out Britney’s name.

Eventually, Alexander is apprehended by a member of the security team who can be see holding a gun in his hand, which he keep pointed towards the floor.

The Ventura County Sheriff’s Department raced to the scene to respond to a trespassing call.

Three police cars arrived at the singer’s Thousand Oaks home just after 2.30pm, along with a fire truck.

An onlooker told DailyMail.com: ‘It all happened very fast. Three cop cars just showed up and went screeching up her drive.

‘We were all trying to figure out what’s going on, especially after the fire truck left.’ 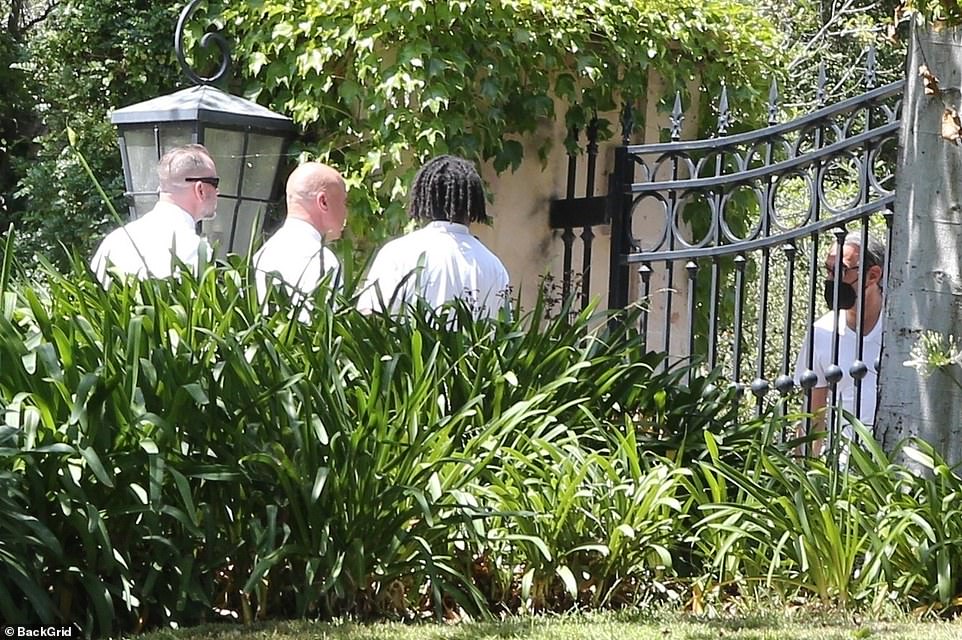 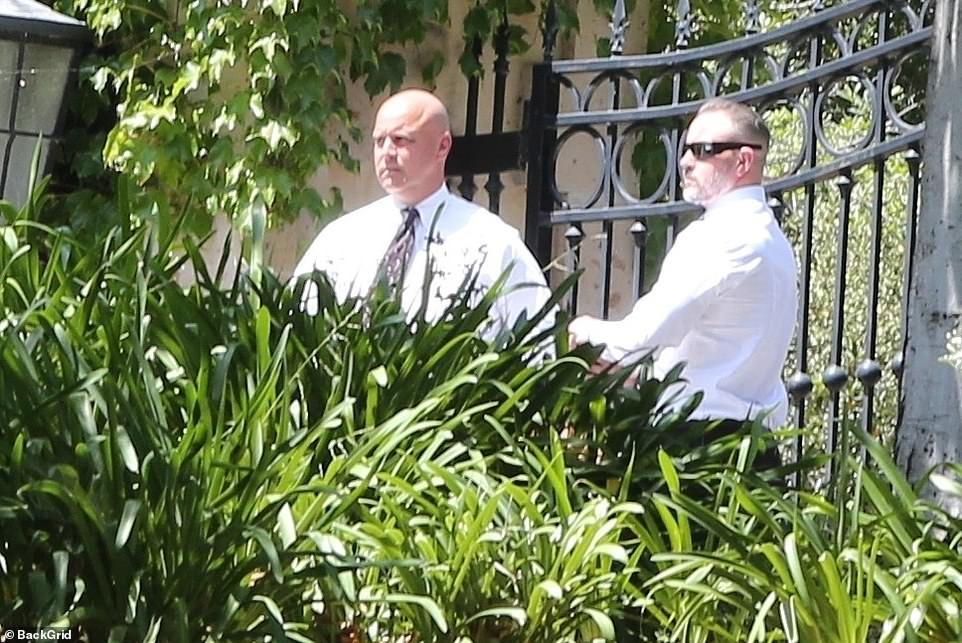 Police were on scene quickly following the disturbance at Spears’ home 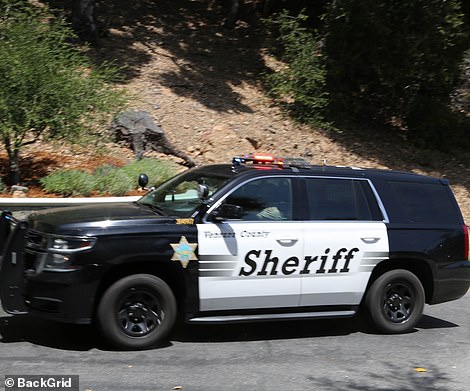 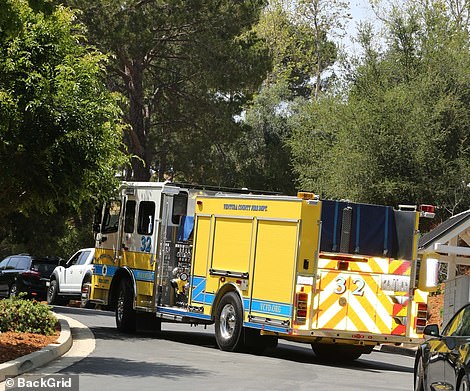 Emergency services including the Ventura County Fire Department were on scene 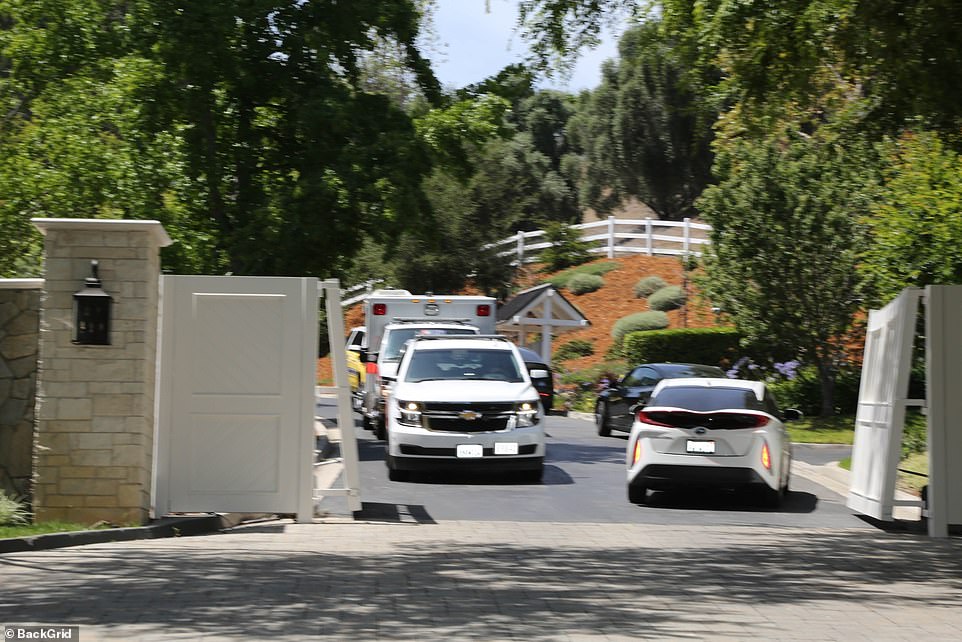 Spears was set to marry Asghari on Thursday after nearly six years together.

The pair announced their engagement via Instagram in September 2021 but had not disclosed a wedding date.

Two months later, the Stronger singer was released from a legal conservatorship that had controlled her personal life and finances for 13 years.

During court proceedings, she said she longed to get married and start a new family without any restrictions.

Spears announced in April that she and Asghari were expecting a baby. A month later, the singer said she had suffered a miscarriage.

Iranian-born Asghari, 28, is a personal trainer and actor who has appeared on the Showtime series Black Monday.

Spears, 40, has been married twice before. She wed childhood friend Jason Allen Alexander in Las Vegas in 2004, but that marriage was annulled a few days later.

That same year, she married dancer Kevin Federline, with whom she had two children. That marriage ended in divorce in 2007. 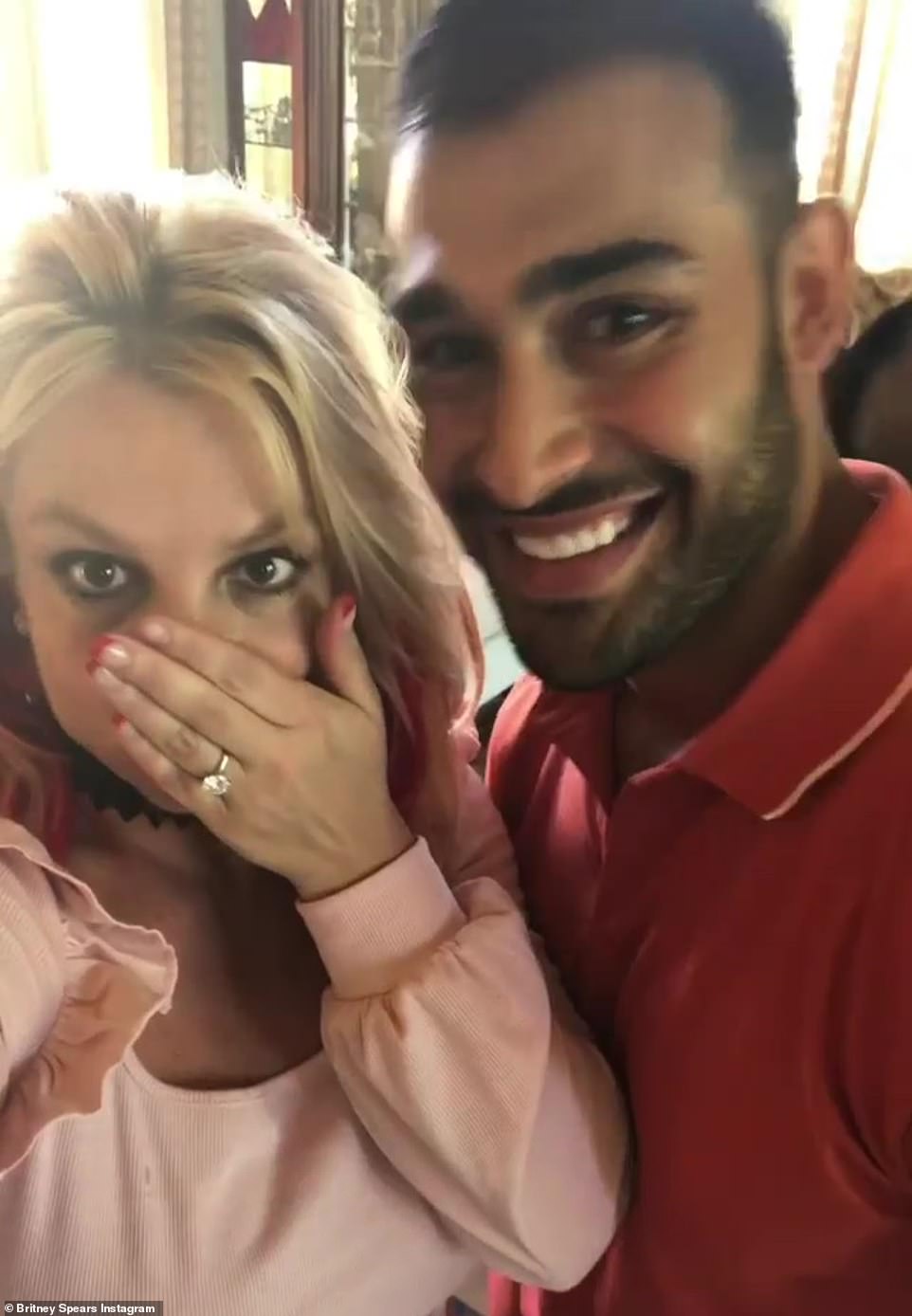 Sam and Britney got engaged back in September 2021 after five years of dating. At the time the pop star revealed the happy news via Instagram, sharing a smiling video of her flashing her custom four-carat Forever Diamonds NY engagement ring