An American tourist has caused $26,000 worth of damage after hurling an e-scooter down Rome’s historic Spanish Steps.

The incident, which occurred at around 3:45am Friday, was filmed by a passerby, with the footage subsequently going viral after being published by several Italian news sites Tuesday.

The footage shows the unidentified woman, who Italian authorities said was a US tourist aged 28, hurling the rented e-scooter down the steps in a fit of apparent rage.

Cops eventually caught up with the 28-year-old, as well as an also unidentified male companion, who is seen in the footage recklessly wheeling his own scooter down the storied stairs, featured in the Aubrey Hepbrun-led 1953 classic Roman Holiday.

The pair were reportedly the fined $400 by police who viewed further security footage of the incident, which saw the woman inexplicably launch the rented vehicle down the steps. Police said the man was also an American, aged 29.

The Spanish Steps serve as one of the most guarded tourist sites in the Italian capital, with police prohibiting people from sitting on them back in 2018.

Cops said Tuesday the damage sustained to the stairs as a result of the woman’s actions will cost at least $26,000 to repair. 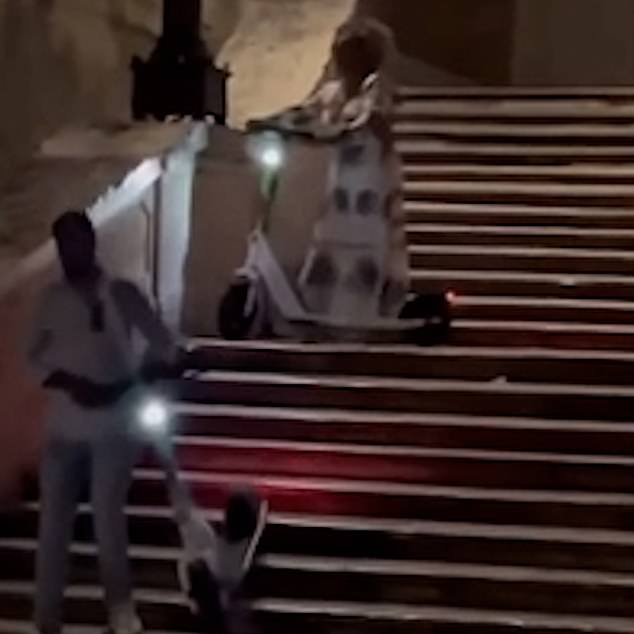 An American tourist has caused $26,000 worth of damage after hurling an e-scooter down Rome’s historic Spanish Steps 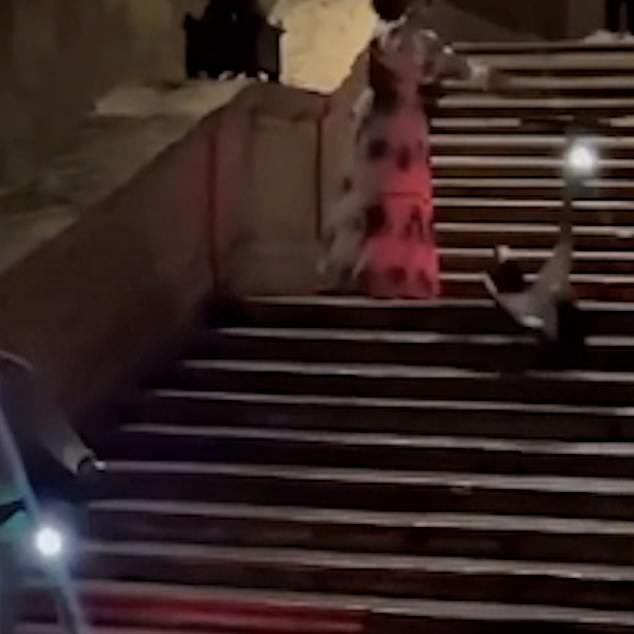 The 28-year-old and her male companion, 29, were fined by police after footage showed her deciding to launch the rented vehicle down the 18th century Unesco World Heritage Site

The city has since seen an influx of poorly behaved tourists at the steps – an 18th century Unesco World Heritage Site – and other attractions around the ancient city, as restrictions implemented during the pandemic are lifted.

On Friday, the unidentified passerby saw the woman struggling down the stairs with the scooter, and proceeded to take out her phone to film the ensuing incident.

At one point in the clip, instead of carrying the scooter down the flight, the woman pushes the vehicle – a popular means of transport for visiting tourists – and watches it tumble, crashing into stone that police said had been recently refurbished.

The pair are now banned from ever returning to the famous monument,  which underwent a $1.5million restoration project in 2015, financed by upmarket jeweler Bulgari, according to local authorities.

Police said security camera footage taken from the scene helped cops locate the pair. Lawmen did not release either of the offenders’ names.

It came only weeks after a Saudi businessman, 37, drove a Maserati down the Spanish Steps after ‘taking a wrong turn’.

The tourist told Corriere della Sera: ‘Yes, it was me who drove the car down the Spanish Steps. But I just took a wrong turn.’ 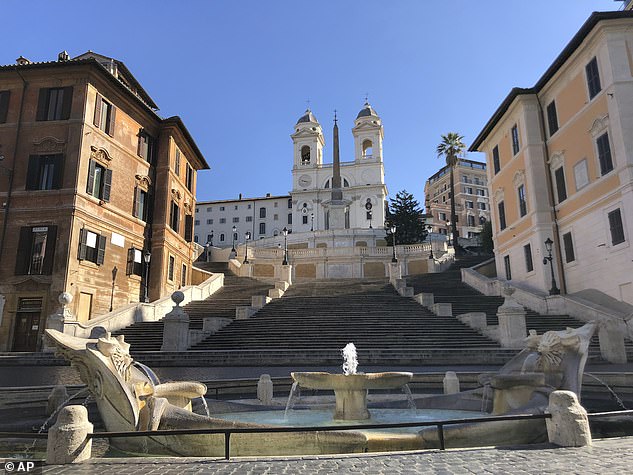 The Steps, designed by architect Francesco de Sanctis between 1723 and 1726 and dominated by the Trinita dei Monti church at the top, are a UNESCO site 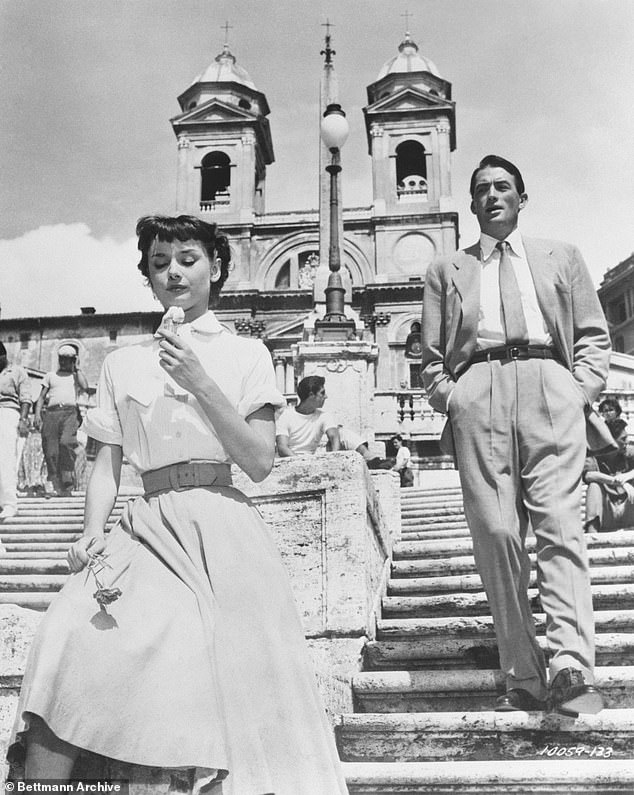 The storied stairs, designed by architect Francesco de Sanctis between 1723 and 1726, were featured in the Aubrey Hepbrun-led 1953 Rome-set classic Roman Holiday, which also starred Gregory Peck (at right)

He added he did not think it was ‘so serious’ after driving down the famous site.

The businessman had been on his way home with a Romanian woman he had met in a nightclub when he drove down the steps, then tried to reverse back up them.

He was forced to call a tow truck before a passerby helped him get the car back on the road.

The Steps, designed by architect Francesco de Sanctis between 1723 and 1726 and dominated by the Trinita dei Monti church at the top, are a UNESCO site – an area of particular interest given legal protection by the United Nations Educational, Scientific and Cultural Organization.

The Spanish Embassy is also located at the top of the stairs, lending the site its name.

The incident comes as tourist numbers in the Italian capital have returned to normal following restrictions spurred by the pandemic, with crowds now converging at the city’s cultural landmarks.

However, the city’s return to prepandemic policies has seen a return of tourists flouting rules of decorum, with two Dutch visitors being fined more than $1,000 for stepping into the city’s Trevi fountain – a common occurrence prior to the pandemic. 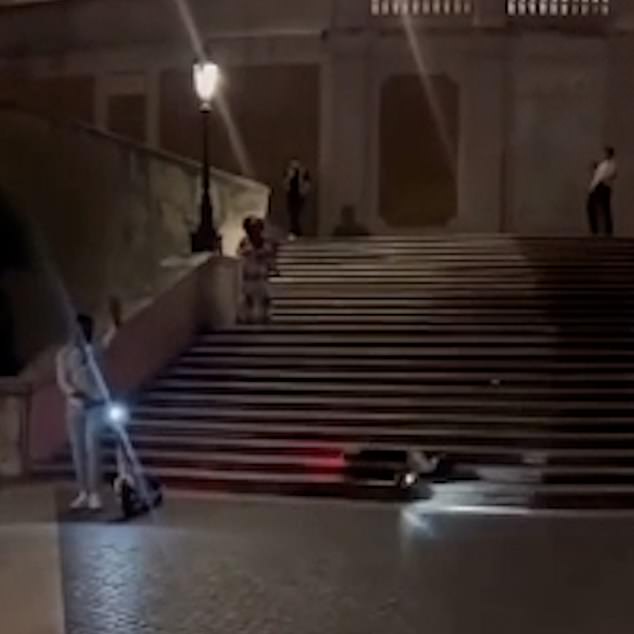 The pair are banned from ever returning to the famous monument which underwent a $1.5million restoration project in 2015

Venice has also seen itself become a popular target for poorly behaved visitors, spurring police last summer to renew a crackdown on tourists, saying their return has exhibited ‘signs of urban degradation.’

Among those fined was a French tourist who boated along the iconic Grand Canal on a stand-up paddleboard, a practice that had been outlawed in 2018, and two German women who sunbathed in bikinis by San Stae church.

Italian authorities have yet to comment further on the incident.

What is a UNESCO World Heritage Site?

A World Heritage Site is an area of particular interest which is given legal protection by the United Nations Educational, Scientific and Cultural Organisation.

The sites must have cultural, historical, scientific or other form of significance and be of ‘outstanding value to humanity’.

The sites can be man-made or natural with 1,154 currently around the world, of which Italy has the most with 58.